School even had its burglar bars stolen

Parents shut down Empumalanga Primary School in Motherwell in Port Elizabeth on Monday in a protest over escalating vandalism. Parents blame the provincial education department for failing to protect the school. The school has 1,094 learners.

Thieves have stripped Empumalanga Primary of window panes, water taps, ceilings, toilet seats, copper cables and lights. They have even taken the burglar bars. Computers in the library were also stolen.

School Governing Board chairperson Nontuthuzelo Jack said that criminals easily scaled the dilapidated fence around the school. “It is our children who end up suffering. We want the department to secure the school perimeter. We demand a strong wall,” said Jack.

“We have been told by officials from the department that we will only be assisted after July as there is no money at present,” she said.

A parent, Pumeza Socuza, accused people whose houses are close to the school of failing to raise the alarm. “There are many houses opposite the school. Why is it they don’t let us know when a robbery is in progress? This means they are working together with the criminals.”

But Lunga Dube, who lives close to the school, blames local scrap metal dealers. “We often hear criminals at night breaking into the school, but we can not do anything for fear of being targeted by the robbers,” he said.

Siphokazi Marwana, another parent at the school, said she has seen bits of the school, such as doors and window panes, appearing in a nearby informal settlement that has recently sprung up. “The police said they could not act because the stolen school property does not have marks with the name of the school … This has created a sour relationship between us and residents of the informal settlement,” she said.

She said she fears for the safety of children as some children were recently robbed of their lunch boxes and their school bags while they were on the school premises.

Nosisanda Fountain, who prepares food for the school nutrition programme, said, “Criminals break through the kitchen ceiling and steal cooking utensils and food. Our kitchen is now not operating to its capacity.”

Spokesperson at the Eastern Cape Department of Education Loyiso Pulumani said the Port Elizabeth district director of education would investigate.

Police spokesperson Captain Andre Beetge said, “As the police we conduct patrols at schools. We even intensify our patrols during school holidays, weekends and during the night because criminals often operate those times. We also contact school management when we see something wrong at their schools.” 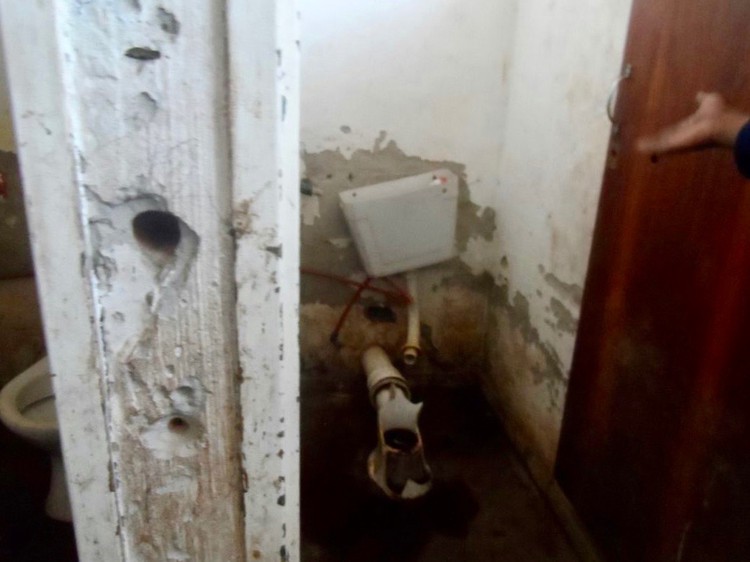 A toilet that has been stripped at Empumalanga Primary School in Motherwell in Port Elizabeth. Photo: Joseph Cirume

Next:  Sexual assault charges against teacher dropped after five postponements

Previous:  How do we prevent South Africans from getting sick with TB?