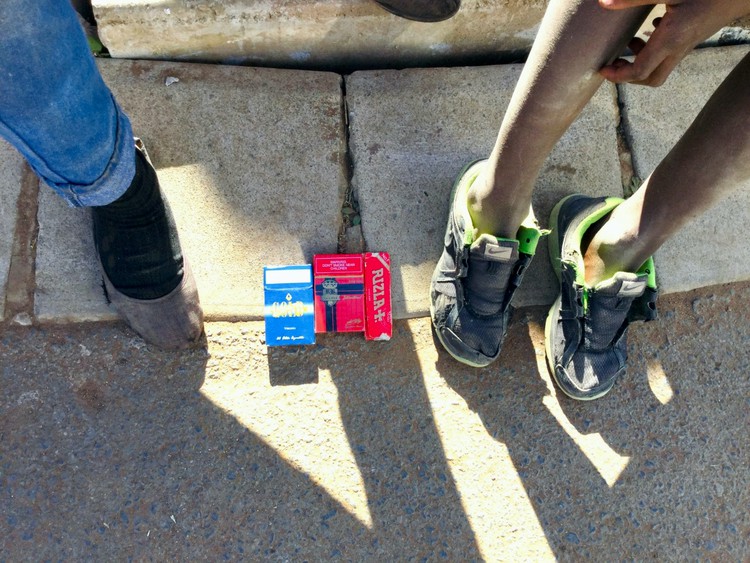 Two school friends, aged 11 and 12, are among many who have joined the illicit cigarette trade that has taken off during the Covid-19 lockdown with schools closed and families struggling to feed themselves. Photo: Kimberly Mutandiro

It is around 2pm on a cold afternoon in Tsakane. Two friends, Musa*, 12, and Thato*, 11, are trying to sell the last of the stock of cigarettes and rizlas which they hide in their pockets. They are not wearing warm clothes or masks, and they haven’t showered or had breakfast yet. There is nothing to eat at home. What they can get for the cigarettes will be their meal ticket.

Musa has six siblings and they all live with their elderly grandparents. They hardly ever have enough food to eat at home.

They used to eat at school through the school feeding scheme. Now with the Covid-19 lockdown, they get up at 6am and start delivering cigarettes to their regular customers around the township. They buy a packet of cigarettes for R53 and sell loose cigarettes for R5 each, netting a profit of R47 a pack. More expensive brands, they sell for R10 a cigarette.

Musa gets cigarettes from older boys on the streets. He recruited Thato to help. At first they were mugged by nyaope smokers, they say, but now they are more vigilant.

“Selling cigarettes helps buy food for my family,” says Musa. A few days ago with the profit of R75 he made from selling cigarettes, he managed to buy 12.5kg of mielie meal. Now he wants to buy a 2kg braai pack of chicken.

Thato lives with four siblings and his parents, who are unemployed. Two days ago, he bought cooking oil for the household with the proceeds from his illegal cigarette trade.

Musa and Thato are not alone. GroundUp spoke to more than ten children selling cigarettes. Older unemployed youths are running the “wholesale” side of the black market, getting stock from as far as Johannesburg.

A 16-year-old grade 9 student, Bafana*, says he sells three to four cartons of loose cigarettes a day. He and his three siblings live with their mother. He used to help his unemployed mom by doing piecemeal work, offloading goods trucks at the local mall, but that has stopped since lockdown.

Pantso*, 14, and Mpho*, 16, have also teamed up to sell cigarettes. “My mom doesn’t have to worry about buying tomatoes and onions now; it is now my expense,” says Pantso.

But, he says, he cannot wait for schools to reopen.

John*,18, said, “I know that selling cigarettes is illegal at the moment. But l have raised a lot of money so far and it is my ticket out of the township.”

Some people in the township expressed concern about the trade conducted by children on the streets. Resident Collen Mhlanga disapproves. “At this pace, children will end up selling anything, even drugs, to help look after themselves and their families,” she says.

Next:  Patients at Mfuleni Day Hospital get medication through the fence

Previous:  Protesters bring road project to a halt in KwaNobuhle