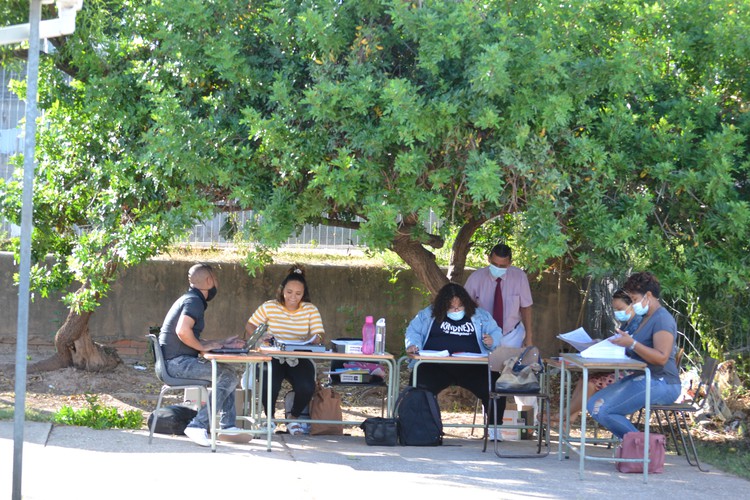 Staff at Jubilee Park Primary School in Kariega (Uitenhage), Eastern Cape, sit under a tree every day because construction on the school’s admin block and classrooms was halted in 2018. Photo: Thamsanqa Mbovane

It has been more than a year since the Eastern Cape education department promised to send officials to assess the challenges at Jubilee Park Primary School in Kariega (Uitenhage).

Nearly 2,000 learners are using prefabricated classrooms while teachers and other staff have to sit under a tree on the school grounds. The school is surrounded by overgrown shrubbery and piles of unused construction material. A R77-million project to rebuild the school halted in 2018.

Terry Hake, Community Liaison Officer for the construction company, said, “For the male teachers and learners, a huge container was converted into three toilets, one of which is out of order. The department of education is failing to release money. That is the only problem. The company is owed up to R8 million to date.”

On Tuesday, principal Patrick Korkee said that it was impossible for learners to maintain a safe distance from one another as a precaution against Covid-19.

“When it is hot in these prefabs, it takes five minutes for you to feel you want to get out of the classroom because of the heat,” he said.

Korkee said some of the staff, which included education assistants, general assistants, and a learner support agent, sit under a tree daily because there are not enough offices and classrooms.

Questions about the delay in construction were sent by GroundUp on 23 February to Vuyokazi Mbanjwa, spokesperson for Eastern Cape Public Works, which is the implementing agent for the project.

Mbanjwa said they would respond to GroundUp in a joint statement with the education department. When contacted again on 25 February, Mbanjwa referred all questions to the Department of Education.

However, provincial education spokesperson Vuyiseka Mboxela promised to respond to questions the following day as they were dealing with the matric results. We are yet to get a response.

Next:  “Most of our members are at Nkandla”: MK veterans say they’re not behind Sunday’s attacks on immigrants