River Club contempt of court hearing pushed back another week 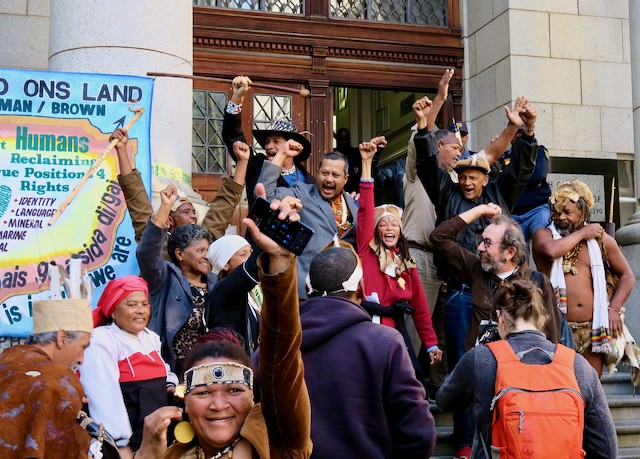 Members of the Goringhaicona and others opposing the River Club development celebrate the dismissal of an urgent application to depose Tauriq Jenkins (centre) as supreme high commissioner of the Goringhaicona Khoi Khoin Indigenous Traditional Council. Together with the Observatory Civic Association, the council has led litigation against the development. Photo: Steve Kretzmann

The contempt of court case against the four company directors behind the controversial R4.5-billion River Club development was postponed yet again at the Western Cape High Court on Wednesday afternoon. The contempt application was brought against the directors of the Liesbeek Leisure Properties Trust (LLPT) for resuming construction at the site, despite a court interdict to stop work.

While these matters were being heard, about 200 people supporting the developers demonstrated outside the court. Alongside them were about 70 people opposing the development. A handful of police kept watch.

Verbal and near-physical clashes were avoided. On 12 July, at the first hearing of the contempt of court case, loud hailers were used to belittle and curse those opposing the development.

By lunchtime, the First Nations Collective supporting the development packed up and left. Those in opposition remained on the court steps, keeping themselves occupied by burning imphepho, chanting and singing, while Judge Chantel Fortuin heard arguments over the application by the Observatory Civic Association (OCA) and the Goringhaicona Khoi Khoin Indigenous Traditional Council (GKKITC) to hold the developers in contempt of court, in their personal capacity.

The developers are Jody Aufrichtig, James Tannenberger, Nicholas Ferguson, Allan Mundell, and Adam Blow. All with the exception of Mundell, who is a financial advisor, are directors in multiple ventures and development companies, with Liesbeek Leisure Properties and Zenprop in common.

The Observatory Civic Association and Goringhaicona Khoi Khoin Indigenous Traditional Council first took the Liesbeek Leisure Properties Trust to court in November last year, when they applied for an interdict to halt building on the site pending a review of procedural decisions taken by the City of Cape Town and relevant provincial planning departments.

The interdict was granted by Deputy Judge President Patricia Goliath on 20 March.

The large mixed-use development, which includes multiple buildings up to eight-storeys high and a new African headquarters for Amazon web services, is being built on a floodplain at the confluence of the Liesbeek and Black Rivers in Observatory.

That the site is sacred to the First Nations, is uncontested. The heritage assessment report, compiled as part of the required environmental assessment for the development, situated it as the site of original colonial dispossession, as Dutch settlers displaced the Khoi from their traditional grazing lands along the banks of the Liesbeek.

In the face of years of opposition through the planning phases of the development, the City and Provincial departments passed the various procedural requirements: environmental authorisation, rezoning, and departure permissions. These were appealed, to no avail.

When LLPT got its water use license to infill part of the original course of the Liesbeek River on 26 July 2021, they started building, until being ordered by the High Court in March to stop, pending a review of decisions. Chief among these was that the Province granted environmental authorisation, despite Heritage Western Cape rejecting the Heritage Impact Assessment which formed part of the required Environmental Impact Assessment.

LLPT then appealed Judge Goliath’s interdict in the High Court, and lost. The developers then filed an appeal at the Supreme Court of Appeal, which is yet to be heard, and resumed site work around 27 June.

The developers argue that the Supreme Court appeal supersedes Goliath’s High Court ruling, their lawyers stating Goliath’s order was final in effect, and not interlocutory.

The OCA and GKKITC disagreed, and on 8 July applied to the High Court on an urgent basis, asking the court to enforce Judge Goliath’s order until the contempt of court matter could be heard. After an initial court appearance on 12 July, it was agreed the matter would be heard on 27 July. But when a judge had not been appointed by Judge President John Hlope by the morning of Friday 22 July, the OCA and GKKITC again approached the court on an urgent basis, resulting in Wednesday’s hearing before Judge Fortuin.

Judge Fortuin, assigned to urgent matters, said that she could not hear the merits of the case as she had not had time to read the papers, which included a 549-page application against GKKITC supreme high commissioner Tauriq Jenkins filed by supporters of the development.

Judge Fortuin said she recognised the urgency of the matter and suggested the merits of the case be argued next week. She was inclined to order the developers to halt any further work on site in the meantime, which Peter Hathorn, counsel for the OCA and GKKITC urged she had the constitutional right to do.

However, Sean Rosenburg, representing Aufrichtig, argued that at the previous appearance on 12 July, OCA and GKKITC had waived their application for an order to halt work on the site with the agreement the full matter would be heard, therefore it wasn’t before her as a decision.

Rosenberg held sway as Judge Fortuin agreed the merits of the contempt of court application would be heard next week.

The OCA and GKKITC’s application was under threat of being scuppered by an urgent application from three people purporting to be part of the Goringhaicona tribe. The applicants, Michael Hansen, Shiraatz Mohammed, and Peter Ludolph have themselves with the First Nations Collective, and sought to depose GKKITC’s Jenkins, who has led the case against the developers together with the OCA.

Jenkins said he received the 549-page application on Monday afternoon, less than 24 hours before it was to be heard in the High Court.

With no time to appoint and instruct legal counsel, Jenkins represented himself in court. Within 90 minutes, Judge Fortuin struck the matter from the urgent roll, leaving the applicants to persist with the application at a later stage.

OCA and GKKITC attorney Hercules Wessels, from Cullinan and Associates, said the contempt of court application is now to be heard on 2 August, but has not yet been informed which judge will hear the matter.