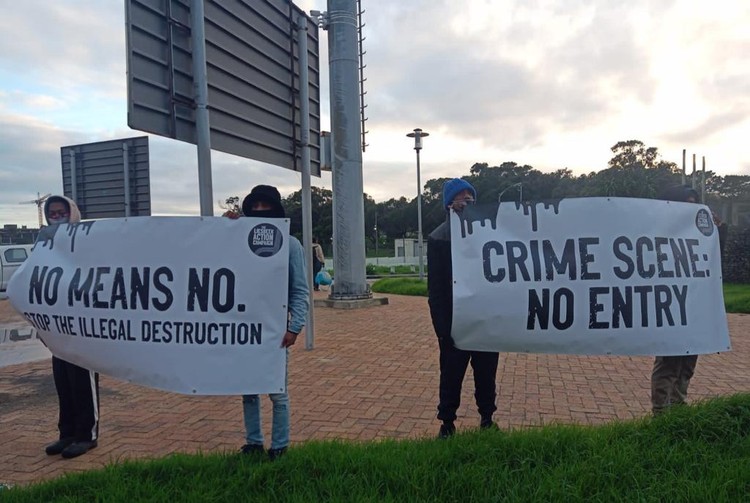 Members of the Goringhaicona Khoi Khoin Indigenous Traditional Council and the Observatory Civic Association are headed back to court this week. They are accusing the developers of the River Club Development of “willful” contempt of a court order which interdicted work on the site pending a judicial review on the approvals given to the R4.5-billion development.

In March, Western Cape High Court deputy judge president Patrica Goliath granted the interim interdict after finding that there had been no “meaningful” consultation for the project with all the affected people. She said the fundamental right to culture and heritage of indigenous groups was under threat because they had not been properly consulted.

A “large-scale urban campus”, which would include the regional headquarters for Amazon, is being developed on the site where the Liesbeek and Black Rivers join.

The site, bought by the Liesbeek Leisure Properties Trust (LLPT) for R12-million, is part of a broader area known as the Two Rivers Urban Park.

On Friday, the Association and Council said it had served papers against the trustees of the Liesbeek Leisure Properties Trust, provincial and local government and the Western Cape First Nations Collective. They say the developers announced in June that they will resume working on the site.

The matter is set down for Tuesday.

According to the applicants, the area was the dominion of the Gorinhaiqua, and it is the only undeveloped remnant of the grazing lands used in the summer by the Khoekhoe for their cattle. The applicants said the site hosted “significant ceremonies and gatherings” and is a “holder of memory”.

The developers say they have lodged an appeal against Judge Goliath’s ruling in the Supreme Court of Appeal, which they believe suspends the interdict.

But in court papers, the applicants argue that the developers’ rationale for disregarding the March interdict is not plausible.

Lawyers for the Association and Council said, “The section of the Superior Courts Act on which they rely only applies to final orders, not interim interdicts. It expressly states that interim orders are not appealable.” They said this issue had already been ventilated, and rejected by the High Court when the developers applied for leave to appeal.

The applicants now want the court to clarify that the interim interdict and judgment precludes the developers from working on the site. They also want an order preventing them from continuing with work.

In the founding affidavit, Leslie London, chairperson of the Association, said that since Judge Goliath’s ruling, they had filed 17 affidavits from representatives of the communities opposed to the development who were never consulted.

In the developer’s subsequent application to the Supreme Court of Appeal, it complained that if it was not able to continue work, it would not be able to complete the development by November. The handover to the tenant is scheduled for 2023 and could “result in the termination of the development agreement and crippling financial liabilities and losses in excess of R386-million”.

London said they were advised by the developers in June that they would continue with work and construction, on the basis that the interdict was suspended by the SCA application.

In a statement on Monday, the developers denied acting unlawfully.

The developers said continuing work would enable 380 workers to return to site and earn an income again.

“The LLPT has had one working day to consider this application. For the reasons that will be set out in its opposing papers, it will be asking the court to dismiss the application,” said the developer.

“The legal advice provided to LLPT is that the judgment and orders by Judge Goliath are final in effect, and hence suspended pending the final determination of LLPT’s application in the SCA,” it said.

“The LLPT categorically denies the accusation that it is in contempt of court as there is no basis for this allegation. It will now be for the Western Cape High Court to decide on the matter.”

Next:  Usable water in Nelson Mandela Bay is down to 2.3% of dam capacity

Previous:  Homeowners clash with shack dwellers over electricity in Mfuleni