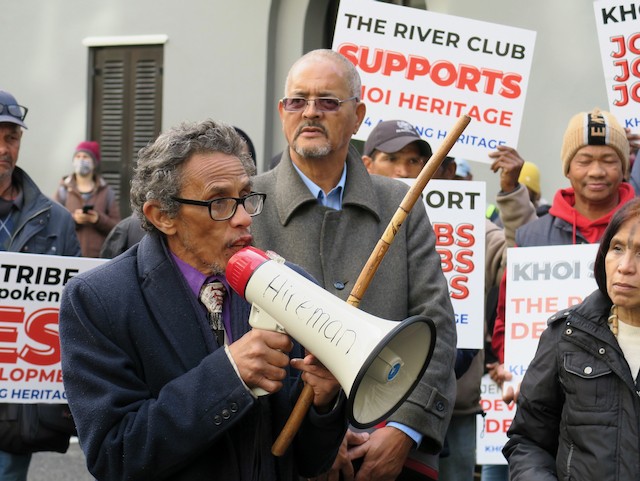 After numerous delays, despite having initially been set down as urgent, a contempt of court application against the controversial Amazon development in Observatory came before the Western Cape High Court on Friday, again as an urgent matter.

But it was then overtaken by a challenge as to who leads the Goringhaicona Khoi Khoin Indigenous Traditional Council, which together with the Observatory Civic Association (OCA), successfully got an interdict to halt construction at the site.

The latest application against Liesbeek Leisure Properties Trust (LLPT), the developer behind the R4.5-billion precinct at the River Club with Amazon as the anchor tenant, was brought on an urgent basis by the Observatory Civic Association, supported by three Khoi organisations.

OCA contends LLPT is violating an 18 March interdict to halt construction at the site, pending a review of the authorisations granted for the development by the Western Cape Province and the City of Cape Town.

The land on which it is being built is part of a floodplain at the confluence of the Liesbeek and Black Rivers, and is also deemed sacred to the Khoi nations. Heritage studies have confirmed it as the site of original land dispossession by Dutch colonisers.

LLPT’s subsequent application for leave to appeal the interdict, handed down by Deputy Judge President Patricia Goliath, was dismissed by her on 5 May in the High Court. But LLPT was subsequently granted leave to appeal by the Supreme Court of Appeal, following which it resumed construction at the site on 27 June.

Appearing before Judge Mokgoatji Josiah Dolamo on Friday, Peter Hathorn, advocate for OCA, argued Goliath’s interdict is an interlocutory order and thus remains in place until or unless the SCA rules otherwise.

Advocate Sean Rosenberg, for LLPT, argued Goliath’s judgment was final in effect, and so falls away in the face of the SCA’s leave to appeal. 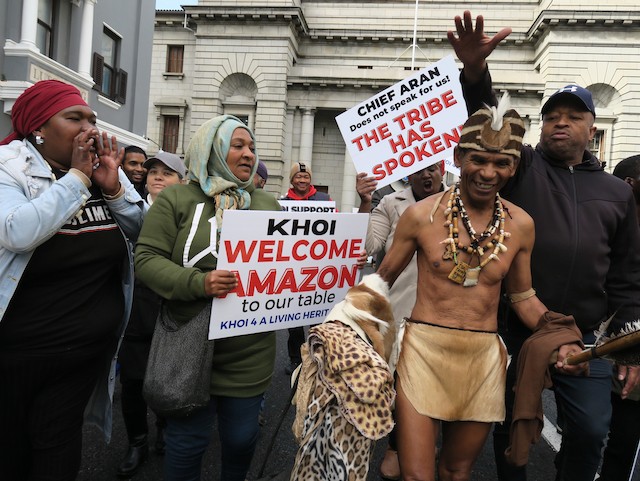 Chief Aùtshumao! Francisco MacKenzie, who opposes development on the River Club site, is frogmarched away from the High Court by demonstrators in favour of the development.

In the afternoon session, Anton Katz, advocate for a faction of the Goringhaicon, introduced a now linked notice of intervention application, accusing the spokesperson for the Goringhaicona Khoi Khoin Indigenous Traditional Council (GKKITC) Tauriq Jenkins of being a fraud.

This was highly relevant, as the GKKITC was together with the OCA, an applicant seeking the original interdict against LLPT.

The affidavits submitted with the intervention application were those of Edmen Hansen and attorney Tim Dunn, who was instructing Katz.

Hansen, who states he is the Goringhaicona Regent, testified that Jenkins had no authority to litigate on the behalf of the GKKITC. Added to which, he argued, Goliath’s order was predominantly premised on the GKKITC’s argument that there was insufficient consultation by the developer with all First Nations parties.

He wants the court to rescind Goliath’s order, claiming it “was obtained on the basis of fraud”, and the GKKITC be withdrawn as applicant in the contempt of court application against the LLPT.

The announcement by LLPT in 2016 of its intention to develop was initially met with unanimous opposition by Khoi houses and organisations. But in November 2019 a Khoi grouping formed as the Western Cape First Nations Collective in favour of the development, splitting the Khoi houses.

Clashes on the court steps

There have been ugly scenes as pro-development protesters clashed with Goringhaicona and those opposed to the development.

First Nation Collective supporters behind the development have hurled verbal abuse at Jenkins and assaulted Chief Aùtshumao! Francisco MacKenzie, frog marching him away from the court steps with insults and chants of “traitor”.

No corresponding violence by opposition to the development was witnessed by this reporter, nor reported.

On the day of the clash, cool drinks had been brought in for the pro-development demonstrators. The driver seen picking them up at the end of the day, was also one of three bodyguards protecting LLPT director Aufrichtig on Friday.

This reporter spoke to three pro-development demonstrators on 12 July, when a crowd of about 200 was gathered on the court steps behind a Western Cape First Nations Collective banner. All had held jobs on the River Club construction site. One said his boss, a subcontractor, had told him he should join the demonstration. Another said his colleague had told him he must join in. The third was vague. None of them were familiar with the Western Cape First Nations Collective, despite being behind its banner.

History of an urgent matter

12 July was the first day the contempt of court application appeared on the court roll. The matter was postponed, with the OCA and GKKITC foregoing an urgent hearing in favour of a judge being appointed to hear it on 22 July.

But it only came before court again on 27 July. On the same day an urgent notice was filed by attorney Tim Dunn, seeking to challenge Jenkins’ authority to litigate on behalf of the GKKITC. This was struck off the urgent roll by Judge Chantel Fortuin.

Fortuin said she recognised the urgency of the contempt of court matter and suggested the merits of the case be argued next week. She said she was inclined to order the developers to halt any further work on-site in the meantime. Hathorn said she had the constitutional right to do this, but she was dissuaded by Rosenberg acting for the LLPT.

Yet again, no judge was appointed by Judge President Hlope, resulting in the OCA bringing the contempt of court motion back on an urgent basis on Friday, but this time without the GKKITC as second applicant, to avoid the contestation of leadership within the Goringhacoina.

Hansen, in his affidavit informed by Dunn, accuses Cullinan and Associates, the firm representing the OCA of deliberately frustrating the legal challenge to Jenkins’ authority within the GKKITC.

But attorney Hercules Wessels, from Cullinan and Associates, stated he believed the notice of intervention seeking to depose Jenkins, as well as an application applying for a resultant rescission of Goliath’s interdict, was brought to frustrate the contempt of court application and buttress “the developer’s ongoing flagrant breach” of Goliath’s order.

Wessels also stated that Dunn had “studiously” avoided revealing his clients’ relationship to the developer and whether his clients were being financed by the developer, either directly or indirectly.

As Katz wrapped up his argument on Friday afternoon, accusing Jenkins of being a fraud, Judge Dolamo requested Hathorn to provide his counter argument in writing, which Hathorn agreed to do by Tuesday. Katz would then submit his final response.

The matter of whether LLPT has violated Goliath’s order to halt building on the site, appears to hinge on Dolamo ’s judgement on the challenge to Jenkin’s leadership within the GKKITC, and on whether Goliath’s order is to read as interlocutory, or final in nature.

The SCA appeal is at this stage set to be heard by a full bench of the High Court on 11 and 12 October.

This paragraph was improved to reflect that the First Nations Collective was formed by a grouping of the Khoi, not all the Khoi: "The announcement by LLPT in 2016 of its intention to develop was initially met with unanimous opposition by Khoi houses and organisations. But in November 2019 a Khoi grouping formed as the Western Cape First Nations Collective in favour of the development, splitting the Khoi houses"

Next:  Ugu municipality defends its record on water

Previous:  Debunking the myth that Africa responded well to Covid

Amazon on a Cape wetland is not acceptable

The understandable concern about the heritage site in Observatory that giant Amazon has reconfigured is surely equal to the horror of reshaping a precious wetland. Heritage and natural environment BOTH require protection here.