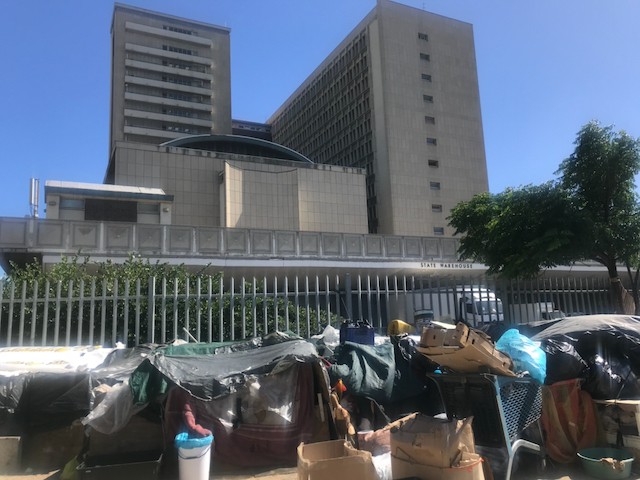 Refugee organisations are seeking to have a Special Master oversee Home Affairs reopening its refugee reception office in Cape Town. The structures in the photo above infront of the Home Affairs building are those of homeless people on the streets of Cape Town. Photo: Tariro Washinyira

The Nbaya order instructed Home Affairs to renew the permits of asylum seekers at its Cape Town offices, irrespective of where the applicants had first applied for asylum.

The SCA order required Home Affairs to re-open the Cape Town Refugee Reception Office by 31 March 2018 and to provide monthly status reports on its progress towards this. Home Affairs sought leave to appeal from the Constitutional Court but this was refused. This means the SCA ruling is final.

The Legal Resources Centre (LRC) is representing the refugee organisations – the Scalabrini Centre and the Somali Association of South Africa.

The closure meant refugees could only apply for asylum in Durban, Musina or Pretoria. The court agreed that this was unfairly penalising refugees and ordered the reopening of the refugee office.

Furthermore, the organisations say that the practice and policy of issuing administrative fines to asylum seekers who cannot comply with the law because there is no office in Cape Town is irrational and unlawful, and Home Affairs is still refusing to renew documents for asylum seekers who initially applied outside the Western Cape,

The LRC filed its court papers on 4 May 2018, according to Petra Marais, attorney at LRC. Further legal wrangling held up the case. Sonke Gender Justice was admitted as a friend of the court in November 2020. The matter will at last be heard on 12 and 13 May.

The applicants want a Special Master appointed to ensure Home Affairs complies with the court orders, and they want refugees and new applicants for asylum to be provided for in the interim by Home Affairs.

“The Special Master will be a highly skilled, dedicated and independent resource to help DHA implement orders; will assist the DHA to monitor their own performance, identify better ways of accomplishing their tasks or managing their resources and compile reports for the court on the DHA’s progress,” says the LRC in court papers.

In its papers, Home Affairs admits that it still does not have a fully functional refugee reception centre open in Cape Town. The department says the reason is that it hasn’t been able to secure premises.

On the matter of administrative fines, Home Affairs argues: “The department requires asylum seekers to pay a fine if their permits expired and will not renew an expired permits unless the fine is paid … The department cannot reliably distinguish between asylum seekers whose permits expired because they were not able to travel to another Refugee Reception Office and those who simply allowed their permits to expire. Vesting officials with the discretion to waive administrative fines in particular circumstances opens the system up to the risk of corruption and abuse.”

Home Affairs also opposes the appointment of a Special Master, saying it “seriously undermines the doctrine of separation of powers to the extent that it constitutes an unprecedented intrusion into the executive sphere, far beyond what is required to secure the implementation of the order of the SCA”.

Though the department has not been able to open the refugee office as required by the SCA order, Home Affairs says, “its failure to do so has not been wilful nor has it been accompanied by any intention to bring either the SCA or this court into dispute”.

“The department has taken, and continues to take, all steps within its power to implement the SCA order.”

Next:  Occupiers fight eviction from multi-million-rand property in Dunkeld West