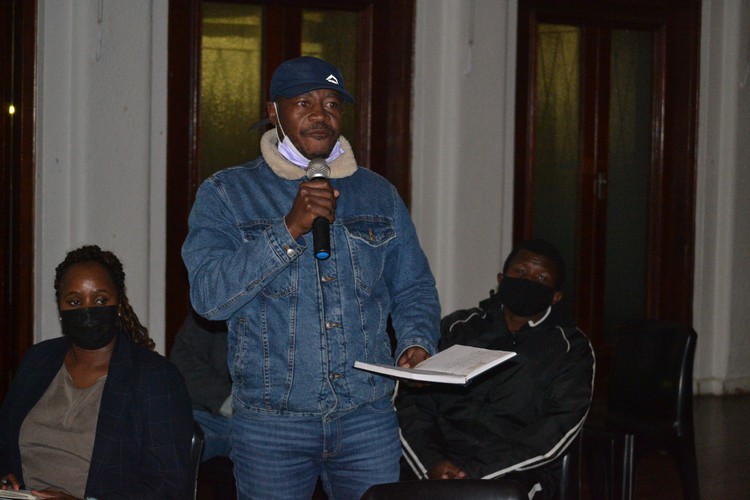 Luyanda Gqubule was among about 100 residents from several wards in Kariega who filled the Town Hall on Monday evening to discuss issues in their communities. Photo: Thamsanqa Mbovane

About 100 residents from wards 42 to 52 filled the Town Hall on Monday evening.

Ward committee member Xolisa Mnyanda from ward 43 asked why the new budget seemed to prioritise speed humps instead of refurbishing dilapidated houses in his ward. “Our people don’t live in speed humps but in houses that need to be fixed. We don’t need speed humps anymore,” he said.

Mnyanda said that water leakages remain a problem despite this being reported to the municipality. “How are we going to avoid Day Zero when you can’t even fix water leaks?”

Ward 42 resident, Mthuthuzeli Frans, said, “Our city is running out of water yet the same clean water is flowing through the streets because of leaks.”

Ward 45 resident Thando Tana from Lapland said people were struggling without toilets. He said crime was also on the rise and the lack of street lights only made the area more dangerous at night. “When we go to the bush we tip toe in the darkness … Provide us with a toilet, each and every household,” he said.

“Everytime we are close to voting, promises are made, but after the vote nothing happens,” he said.

“We have employed more contractors that are going out to deal with these water leaks in townships. Since April last year, the municipality has fixed about 30,000 water leaks. However, you fix one leak but because of pressure something pops out in another pipe causing another water leak,” said Grootboom.

Grootboom also promised to alert the City to clean-up problem areas in the townships.

On the issue of dilapidated and unfinshed houses, Grootboom said that it was the provincial government’s responsibility, but he noted the complaint about the lack of street lights.