About 500 land occupiers lose their homes

An army of Red Ants — some wearing red overalls others in black riot gear and carrying guns — demolished 110 shacks in Dunoon on Thursday. The shacks were on privately owned land at the back of Kwa 5 informal settlement. About 500 people were occupying it.

Accompanied by Public Order Police, the Red Ants in riot gear — who are known as the Stabilization Unit — lined up to keep the land occupiers at bay, while their colleagues in red overalls used crowbars and steel rods to tear down the shacks and later load the materials onto trucks.

The land occupiers, who were evicted from their shacks, assembled at the back of Kwa 5. They watched their shacks being torn down.

Bedsheets, mattresses, buckets, pots and other household belongings were left strewn on the site after the demolitions. Some people managed to salvage their belongings. 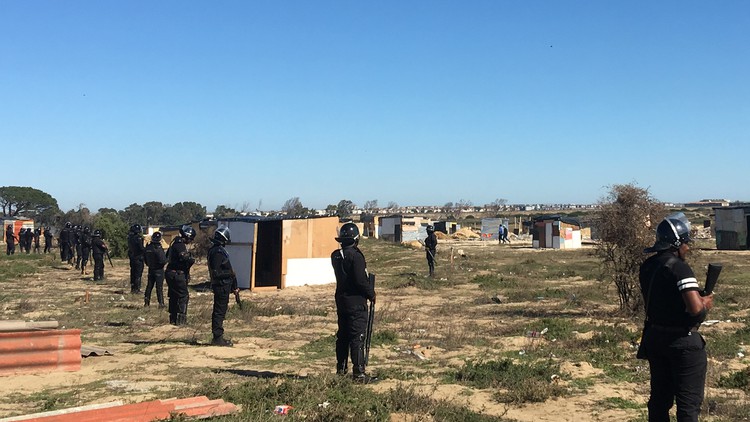 The Red Ant Stabilization Unit together with police formed a barrier to prevent occupiers stopping the men in red overalls pulling down shacks. Photo: Peter Luhanga

Land occupier Lungile Ndaliso said he had built his shack on the site three months ago and had been living in it. “We have been attempting to live here for the past 18 months. Each time we build they come and demolish our shacks and confiscate our shack materials. It is so painful to watch them destroy our homes,” he said.

He said that lack of land for houses in Dunoon compelled the occupiers to settle on privately owned land.

Oda Nditya used to rent a one-room shack in Kwa 5. Being unemployed he could no longer afford to pay R800 per month for rent and a separate R200 for electricity. So he joined the occupation.

It cost him R2,000 to erect his shack. He claimed his belongings had been taken in Thursday’s eviction. He was so angry that he said he would not vote in the upcoming election.

Nomfuthuzo Baliso was on her way to Cape Town city centre to buy clothes for her youngest of four children when she was called to come home as shacks were being torn down. When she returned she saw her shack material scattered and her household goods strewn about her plot. 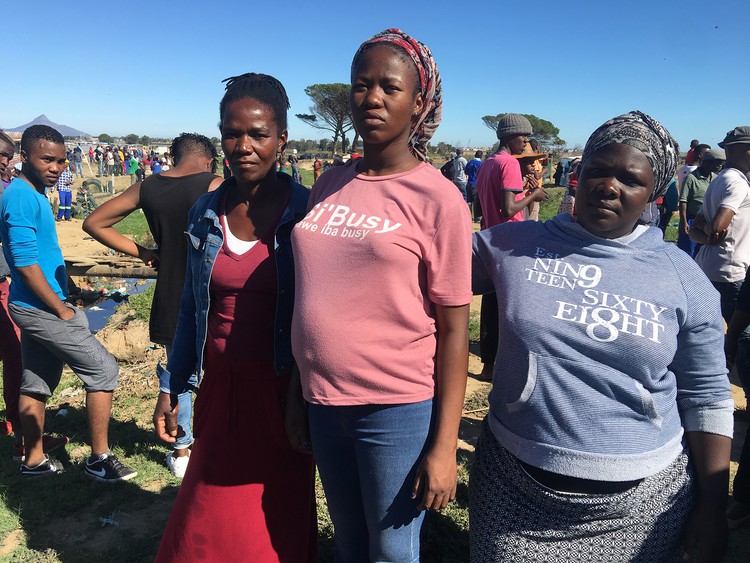 Land occupiers Nomfuthuzo Baliso, her pregnant daughter Namhla, and Lungelwa Makhabelo have been left stranded. Their home was among the 110 pulled down on Thursday. Photo: Peter Luhanga

Johan Erasmus, a deputy sheriff for Cape Town north, was at the scene. He showed GroundUp a copy of an interdict granted by the Western Cape High Court, dated 22 June 2018. It restrains “any persons whose identities are unknown, who have and or who intend to occupy ERF 38371”.

Erasmus said he was there to enforce the court interdict and remove the 110 structures illegally erected on the land. He said he visited the site on Tuesday this week and served the land occupiers with notices of eviction. He affixed notices onto shacks if nobody was home. “The only time they [occupiers] can rescind the court order is when they can get an attorney to represent them in court,” he said.

He said that when he was about to leave the site on Tuesday the occupiers blocked the exit from the site. When he eventually left the occupiers set two vehicles alight along Malibongwe Drive.

Milnerton police spokesperson Captain Adriana Chandler said a man in his thirties was arrested on Tuesday after being part of a group of people who had set two trucks alight and threw stones at motorists on Malibongwe Drive.

Chandler confirmed that on Tuesday police accompanied Erasmus as he gave notice of the evictions. “The community was not happy but the sheriff did his work and left with police afterward.”

Next:  RDP house flooded every time it rains