30-year-old settlement is still a mess

A filthy ditch of stagnant water, oozing with rubbish and even dead rats, runs behind the houses in Kanana informal settlement in Gugulethu.

The settlement was started in 1989 by families from Gugulethu who occupied an old landfill site. Today, according to the Western Cape Human Settlements department, there are 3,000 households. The Department has a plan to relocate Kanana families and build housing on the land, but in the meantime residents are complaining about living conditions.

Community leader Jacob Ndoro, who has lived there for 26 years, said dirt and the infestation of rats were the biggest problems.

“You see this stream, it is supposed to be free-flowing through the area but as you can see it has stagnant water and it is filled with rubbish. The pipe that the water is supposed to go through is blocked. We have people who clean the stream, but because people throw their dirty water and garbage here, this is what happens,” said Ndoro.

When GroundUp visited the area, bottles, plastic, cans, paper, food and pieces of clothing could be seen in the green and grey water. Two big dead rats lay on one side of the stream. Further up the stream was a huge pile of rubbish, with two torn couches.

Ndoro said shipping containers had been placed around the area for residents to dump garbage but some residents lived far from the containers and just dumped their rubbish anywhere.

The area had been serviced with electricity, Ndoro said, but there were still sections with no electricity, where residents had resorted to illegal connections. He said they also struggled with sanitation.

“Most of the area has standpipes, but some are broken or leak, causing more flooding. When it comes to toilets, we are still using non-flushing chemical toilets,” said Ndoro. 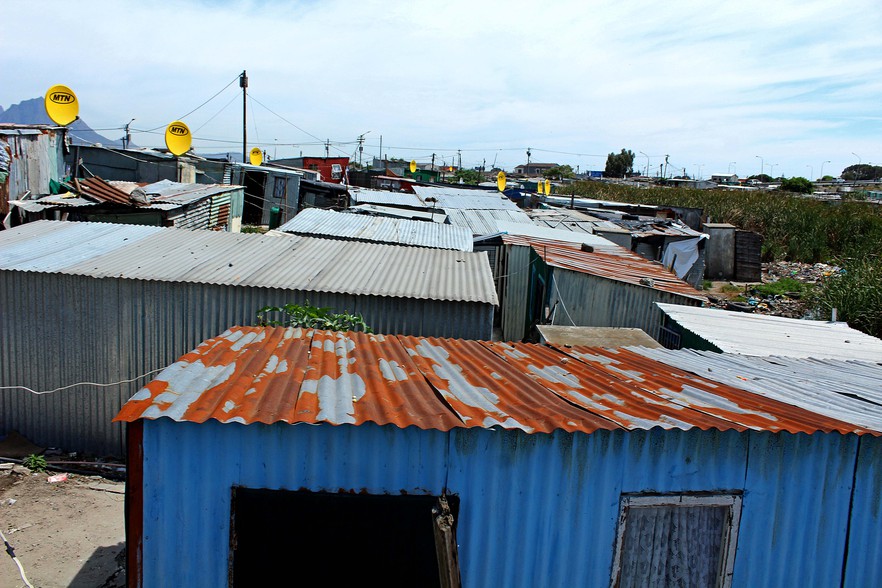 City of Cape Town Mayoral Committee Member for Water and Waste, Xanthea Limberg confirmed that Kanana informal settlement was on City-owned land. She said a solid waste cleaning contractor was active in the Kanana area, and provided a weekly door-to-door collection service.

“When collection teams visit households, they provide two refuse bags for waste. There is also a seven-day-a-week programme, which includes 22 workers and four supervisors, who pick up general litter and undertake other cleaning services. Shipping containers are also on-site for the storage of waste,” said Limberg.

Another resident, Owethu Tshengu, said he was worried about housing in Kanana. “We have been promised time and again by human settlements that we would be moved and housed in a new development in Mfuleni, but we are still here and we are being told nothing,” he said.

Tshengu said just opposite them, a neighbouring informal settlement called New Rest, there were constant housing developments, and some residents had long since moved into new homes. “We invite these housing officials here, they come and they give us empty promises.”

Western Cape Human Settlements MEC Tertius Simmers said Kanana, Barcelona, Europe, Vukuzenzele and Lusaka informal settlements were all located on an old landfill site, which had to be rehabilitated. “To facilitate this rehabilitation, the entire settlement, which comprises over 3,000 households, will have to be relocated to an alternative area.”

“This poses a significant challenge to the Department, as we currently do not have as many housing opportunities available to relocate the entire area all at once. The community of Kanana is therefore being relocated in phases as and when opportunities become available. The first relocations were undertaken in April 2019, with 19 households from Kanana being allocated units in the Forest Village development.”

Simmer said the department had also appointed contractors for the development of various greenfield sites earmarked for residents of Kanana and other settlements on the landfill. Construction would officially start in the new year, he said. Once units had been completed, the large-scale relocation of Kanana households and preparation of the area for construction would be possible.

Next:  Wheelchair user Nonkululeko Dziweni has to wait for two people to take her to the toilet in a mall one kilometre away

Previous:  Occupiers of old age home prepare for another night outside