“We have every legal right to be here. We are going nowhere,” a land occupier in ward 59 near Verulam, north of Durban, told GroundUp.

The occupiers have letters with Qadi Tribal Council stamps, showing that they purchased sites for R450. But last Thursday, the eThekwini land invasion unit demolished 15 shacks and clashed with the occupiers.

Rubber bullets were fired injuring two people including a young woman, Nonkululeko Cele. “I didn’t do anything wrong. My crime was to take photos and film [with her cellphone] everything they were doing – that is why they targeted me. We were not violent at all. All we did was ask questions,” said Cele. 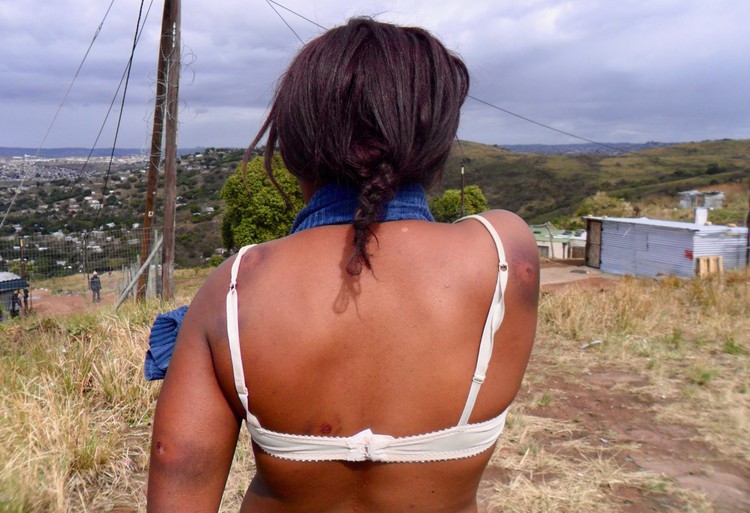 Nonkululeko Cele says she was shot with rubber bullets after she took pictures and videos of the City’s anti-land invasion unit demolishing shacks. Photo: Nokulunga Majola.

“All of a sudden there is someone who claims he owns the land, since when?” asked Martha Zulu, 60. “There are graves that have been here for years. Where was the owner when our families were buried on this land? This land belongs to the Qadi inkosi and its people.”

Zulu says she was born and has lived her whole life in the area. “They [law enforcement] fired towards my house where the children were playing without any care in the world,” said Zulu.

Ward councillor Bongani Majola said, “All I know is that the City’s unit went there to carry out a court order and they are within their rights to do so.”

Occupiers and the inkosi say Thamodarum Govender claims he owns the land and obtained the court order. (Govender could not be reached by GroundUp.)

Majola said, “I have told those people to stop building on that land because it is a privately owned land. There is development set for the land but people continue to build there as the izinduna continue to give sites.”

Induna for the area Muntu Shangase said, “They fired guns on the inkosi’s land. Who gave them the right? They continued doing so even when I told them to stop. We don’t want a fight with the City. The land belongs to the inkosi of the Qadi people and he can do with it as he pleases and he chose to give sites to the people who need it.”

Shangase said, “Beating up people and firing rubber bullets is not acceptable. The inkosi has his arms wide open for any talks, but we will not sit by and allow our people to be harassed. On Sunday, we will be giving people letters giving them permission to build on the land.”

A request for a comment was sent to the City last Friday but there has not been any response.

A meeting between the izinduna of the Qadi, land occupiers and ward councillor has been scheduled for Sunday.

Next:  Our businesses are collapsing because of criminals, say traders

Previous:  Pigs starve as agricultural school teeters on the verge of collapse