Mentally disabled Sipho Mpinda was arrested on Thursday. On Monday his family found out he was dead

Police are investigating his death

Sipho Mpinda was arrested at Khayelitsha Mall and transported to Lingelethu West on Thursday last week. Police notified the family a few days later that Mpinda had been hit by a truck and killed.

Scores of residents blocked the entrance to the station. Singing struggle songs, they waved placards that read: “Killers of Sipho must fall” and “Sipho was a breadwinner”.

A witness told GroundUp that after Mpinda got out of the police van “two police officers threw him down and dragged him through the entrance to the police station”.

She said, “I was shocked to see blood flow from a huge bloodied lump on his head and drench his Kaizer Chiefs jersey.”

Loyiso Feke, a friend of the deceased, said Mpinda had accompanied him to the mall to buy birthday gifts for his baby. As usual, Mpinda had waited beside the car.

“When I returned from the shops, I saw his reflector vest next to a rubbish bin and his cap lying close by, and I asked [the security] guards where he was … They told me that Lingelethu West cops had arrested him,” said Feke.

The security guards told him police had beaten Mpinda.

“I asked why they arrested him, and they said they caught him trying to break into a car,” said Feke.

When he asked which car Mpinda was accused of trying to break into, they showed Feke his own car.

Nceba Xhosana, a neighbour, said, “His death has broken my heart because he loved me very much.”

Xhosana said Lingelethu West cops had told Mpinda’s family on Monday that Lentegeur cops had found his body after a truck hit him. They asked the family to go to the state mortuary in Salt River to identify him, he said.

Xhosana said: “We asked the cops who saw the truck hit Mpinda, but they don’t tell us … I and the whole community blame the cops for his death because they arrested him and took him away from the mall.”

Zwelethemba Mene, also a neighbour, said he had asked the Lingelethu West police about Mpinda’s whereabouts on Friday. “The police said they let him go because he was too strong for them. I asked them why they let him go though they could see he was mentally handicapped,” said Mene.

Nokhaya Mthengeli, a member of SST Neighbourhood Watch in Town Two, said, “The police showed us his docket and said they noticed he was mentally disturbed after fingerprinting and photographing him and decided to release him.” 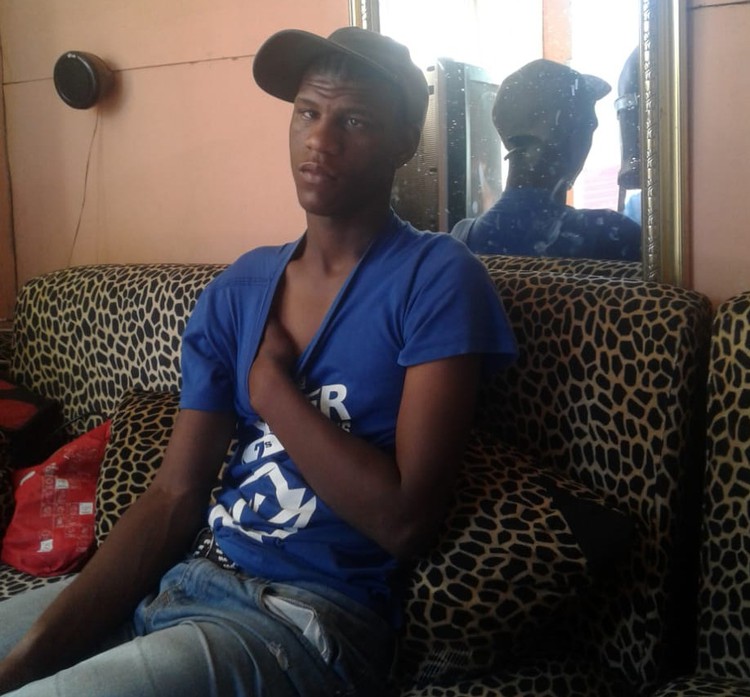 “I feel sad that my son has died. I and Sipho were close and used to love each other,” said Nomakhaya Makeleni.

She said she, her neighbours and relatives had gone in search of Mpinda until 3am on Friday looking for him at Enkanini informal settlement, Harare, and near Lingelethu West Police Station.

“On Saturday, we put up Sipho’s photos in Enkanini and Harare and shouted over a loudspeaker for residents to help us find him. Throughout the search, the police never assisted or supported us,” she said.

“I want the relevant authorities to dig up the truth about the death of my son and bring the culprits to justice,” she said. “I used to use his money to buy food and clothes. Now that he is dead, we will starve.”

Mpinda’s mother said the family had no money to bury Mpinda.

In response to GroundUp’s enquiry, Lieutenant Colonel Andrè Traut of SAPS Western Cape Media Centre, said Mpinda had been arrested on 6 June by police officers “on the grounds that he was seen trying to break into a vehicle at a mall in Khayelitsha”.

“Upon their arrival at the police station with the 22-year-old man, it was discovered that he was mentally challenged and the members decided to take him to a medical institution. As he was no longer deemed a suspect due to the circumstances, he was not handcuffed while being escorted. While leaving the police station the man managed to run away.”

“Later that evening the man was reported as missing by his family. All endeavours by police to locate him were unsuccessful, and his body was discovered at the morgue the next day. He was allegedly involved in a culpable homicide accident which is currently under investigation by Lentegeur police station.”

Traut said that an internal investigation was underway.

Next:  One third of domestic workers are still not registered for UIF

How far have we come since the dark days of apartheid? Then opponents of the totalitarian order were arrested, tortured and murdered. A quarter of a century later the police still seem to have little legitimacy in society, don't appear to be doing their job and appear as capable as ever of being the cause of death of innocent people.