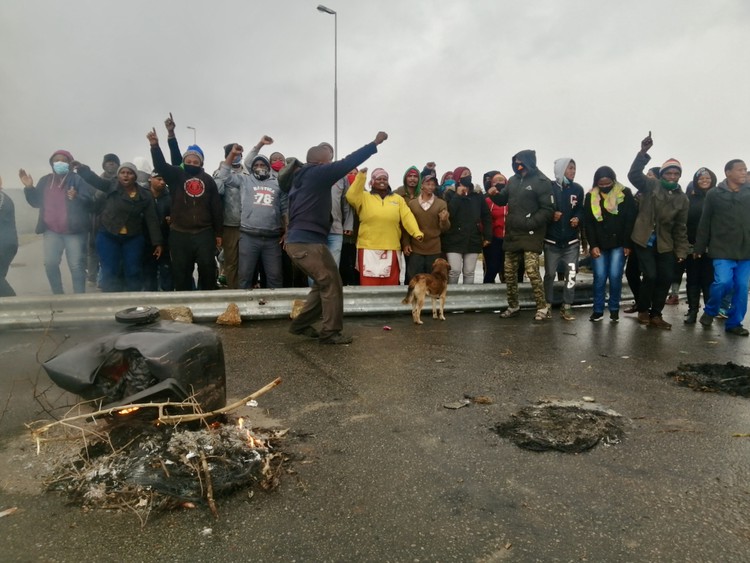 The protest started on Wednesday evening in Jaagvlakte. By 4am on Thursday the three areas embarked on a total shutdown. Qunu residents blocked Chatty Road and Old Uitenhage Road by ripping out guardrails and placing them on the road. Vastrap and Jaagvlakte residents stoned and turned away vehicles in Stanford Road.

Protests stopped mid-morning after the municipality sent an official to address the demonstrators at Booysens Park Community Hall.

These were not the first protests in an ongoing saga over relocation. Minister of Human Settlements Lindiwe Sisulu said in April that to slow the spread of Covid-19 all congested informal settlements must be de-densified and people relocated to areas with water and toilets. But the relocation has gone badly in Port Elizabeth. The first phase of relocating 327 households from Vastrap and Qunu informal settlements to Jaagvlakte services sites started on 27 February after violent protests and finished at the end of July, dragged out by fighting between various communities and political bungling.

According to Qunu community leader Siyabonga Myoyo the second phase of relocation to 555 serviced sites in Jaagvlakte was supposed to start on 1 August. He said municipal officials “told us that they were busy veryfying a list of beneficiaries … But we told them that everybody in our areas has a house number and we know who is supposed to be relocated.”

“In Qunu we have 1,323 households who share 161 chemical toilets. There are seven communal taps and only four are working. We live in darkness. The installation of electricity poles started last year and the project just stopped without any explanation. We have five households whose shacks were dismantled in order to be relocated, but those families are still living outside including a pregnant woman,” he said.

Vastrap has about 500 shacks that still need to relocated, but the land is overgrown and has not been prepared. The municipality has only put out pegs for site allocation.

Vastrap community leader Octavia Mento said: “For 14 years I have been living in Vastrap. I watched many people, including children, being electrocuted by illegal connections. People, [including] disabled and elderly, are still living in shipping containers. Where are the temporary shelters the Minister promised the people?”

“How can you subject eight households to sharing one chemical toilet but we are facing Covid-19. We have sick families but we are forced to share toilets with them.”

Jaagvlakte community leader Masixole Mlaja said, “We live in municipal serviced sites with streets. There are water pipes underground, but there is not even a single standpipe. Water is delivered by water tankers once a week and then we are forced to go to Qunu standpipes for water.”

“We have 327 households and we share 51 chemical toilets. The storm water drains have become places for residents to empty their buckets of poo and pee … On hot and windy days the smell from those drains is unbearable.”

Thembelani Kondile, a researcher at the municipality, said the the relevant heads of the affected departments will meet with the community leaders on Friday.

The Metro last had a municipal manager in September 2018 (Johan Metler) and a mayor (Mongameli Bobani) in December 2019.