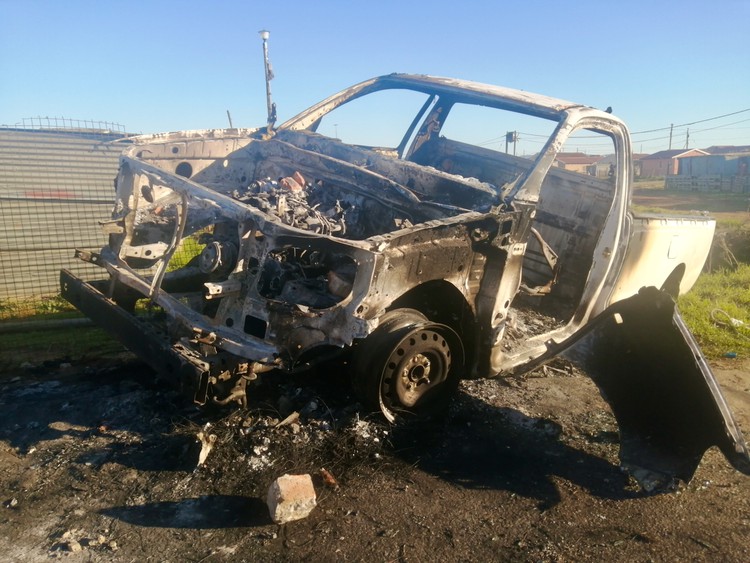 More than 100 people from Vastrap informal settlement in Port Elizabeth blocked roads with burning tyres and rocks on Monday morning. They are demanding that the Nelson Mandela Bay Municipality stop using serviced sites at Jaagvlakte for its Covid-19 relocation program. They want Vastrap residents to be relocated immediately.

As early as 4am vehicles were stoned in Stanford Road. A bakkie belonging to the Scribante Construction company was torched in William Slammert Road. Protesters confronted police trying to extinguish burning tyres at Auburn Road.

Protesters shouted that they would not move until they were told when they would be relocated to Jaagvlakte.

On Friday, protesters torched a municipal truck in William Slammert Road after the municipality relocated people from Missionvale and Qunu informal settlement to Jaagvlakte as part of its Covid-19 response to de-densify congested areas by relocating elderly and disabled people.

Hundreds of Vastrap households had expected to be relocated earlier this year, but the relocation stopped on 2 March after a failed meeting between Mayco Member for Human Settlements Andile Mfunda and Vastrap and Qunu informal settlements leaders.

“For 14 years I have been living in this area. The last successful relocation to take place here was in 2016. Then in February this year it started after we had a violent protest. Out of 327, only 117 households from Vastrap were relocated in February. But it stopped after Mfunda forced us to share our 327 sites 50-50 with Qunu,” said Octavia Mento, a community leader in Vastrap.

“But why is our relocation not taken as seriously as Covid-19?” she asked.

“We are being undermined and provoked by this municipality. They are using our Jaagvlakte sites for Covid-19 relocation while we fought hard for these sites … We understand it is done to mitigate the spread of the Covid-19. But what about our people who have been waiting for too long to be relocated?” she asked.

“Every time it rains here we have to leave our shacks and sleep at community halls. Our place turns into a pigsty because it is muddy. We have elderly and disabled people who live in shipping containers.

“Qunu informal settlements are benefiting through Covid-19 … We cannot be forced to give them our sites while they never assisted us when we were protesting. This municipality must stop sowing divisions among the residents,” said Mento.

Ward 29 Councillor Vukile Dyele (ANC) said: “We have been engaging with the community leaders trying to explain this type of relocation but they seem not to understand. Last week ten households, five from both from Qunu and Vastrap were relocated to Jaagvlakte.

“The current relocation is for Covid-19. The normal relocation will resume when things have gone back to normal.”

Dyele refused to comment on whether the 50/50 decision led to the protests.

Municipal spokesperson Mthubanzi Mniki has not returned our calls or messages since Friday.

Next:  Feeding poor people: The national government has failed