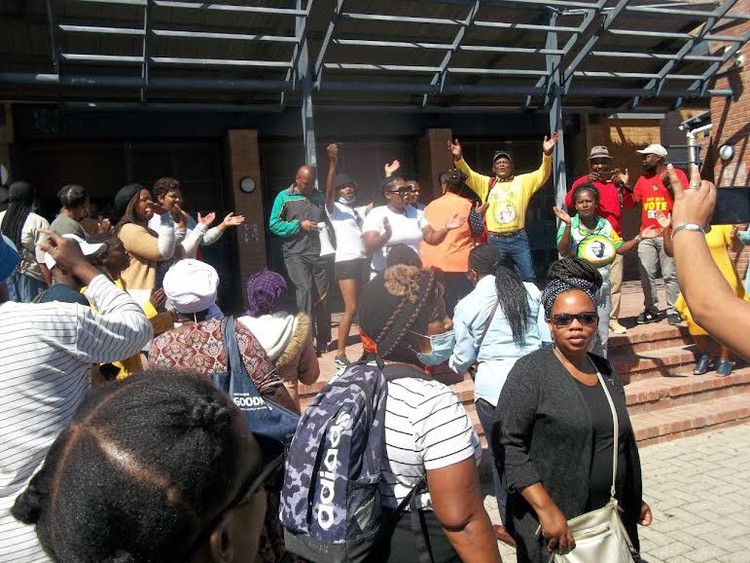 Khayelitsha residents entered the Magistrates Court on Wednesday demanding a moratorium on bank evictions through the court and the reinstatement of families who have lost their houses.

Lonwabo said the residents protested outside the court because the court issues the eviction orders.

He said: “If the court continues to give eviction orders against the home owners, we will shut it down.”

Community leader Zukile Sinama said banks put houses on auction without the knowledge of the owners. “Owners can’t go to the auction to buy their houses again cheaply. A house is auctioned for R3,000 while the owner owes the bank only R4,000,” he said.

Sinama said: “The courts must stop issuing eviction orders, otherwise we won’t stop the residents when they defy the sheriffs.”

Community leader Kholekile Mwahla said the courts must give the evictees alternative accommodation. He said about 200 families are facing evictions “but others are resisting” in various townships.

“We must start a consumer boycott to make banks understand our power and talk to us,” he said.

Protester Zandile Funa said she and other residents defy court sheriffs who evict them in Mandela Park and urged others to do the same.

“When the sheriff puts your belongings out, put them back in. No one must sleep outside without alternative accommodation,” she said.

Zimkhitha Jaca, who joined the protest, said she and her mom were evicted from their house in Bhongweni in 2016. “My mom languished in Pollsmoor Prison for five weeks after she defied an eviction order and stayed in the house. We moved out eventually,” she said.

Jaca now stays in a three room house with Nolubabalo Sillie, who is now also facing eviction. Sillie said her parents died in April and December 2018 and the eviction process started in 2019.

“When I and my brother ask the bank to make arrangements for us to pay, they say we need a lawyer to act on our behalf because the house was registered in our parents’ names,” she said.

“We want the bank to allow us to finish the payment. We have nowhere else to stay,” she said.

The protesters sang struggle songs and entered the court after waiting for an official to come out and attend to them.

Community leader Victor Mrhawu said the protesters wanted an “urgent meeting” with the magistrates and prosecutors to discuss their grievances.

He promised to meet the community leaders and advise them which senior court officials they could meet to discuss their demands.

Next:  Lottery money funded the board chair’s luxury private estate