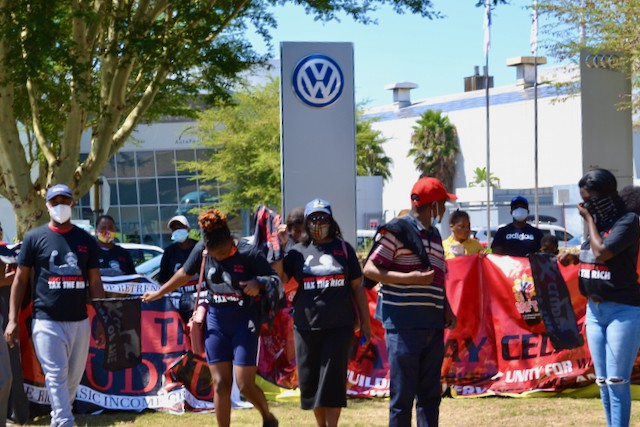 About 30 members of the South African Federation of Trade Unions (SAFTU) protested outside Volkswagen South Africa’s main plant in Uitenhage on Wednesday morning.

The protest — in conjunction with the South African Communist Party (SACP), EFF, Assembly of Unemployed and Makukhanye Rural Movement — was to demand that 14 shop stewards, fired on 29 December, be reinstated.

The shop stewards were fired after workers downed tools because of a dispute over Covid-19 safety in July. Workers had said they did not feel safe on the production line.

Volkswagen insisted it had met all safety requirements.

Siphiwo Ndunyana, provincial executive member of SAFTU, shouted during the protest: “We lose jobs every day. They are adding to the poverty that already exists.”

“If it means that every week we must be here, we will be here.”

Busiswa Stokwe, district executive member of the SACP, said, “We are very shocked that Volkswagen SA would take such a position by dismissing leaders of the workers in a workplace … Volkswagen SA has positioned itself in the media as a progressive employer, as a progressive stakeholder in assisting the government of the Eastern Cape, in making sure that they were even availing the field hospital.”

Volkswagen spokesperson Andile Dlamini said shop stewards had admitted during the disciplinary enquiry that claims made over safety were false.

Next:  Closure of SASSA office leaves Saldanha Bay beneficiaries in the lurch

Previous:  Man burnt to death for stealing a cellphone