Part two in a series on the Pondoland dagga growers

In the hillside Pondoland village of Manhlaneni, a small delegation from the Eastern Cape Department of Rural Development and Agrarian Reform stepped into a dimly-lit rondavel where a group of women sat on upturned beer crates removing the leaves from dense bunches of cannabis.

One of the women passed a large handful of green buds to Sibusiso Nongwanya, the department’s chief of staff, then howled with laughter as he posed with it awkwardly for photos.

“People here have been growing and surviving from selling this plant for generations, but it has always been illegal,” Nongwanya told GroundUp. “We want to make sure that this indigenous knowledge can empower these farmers in a commercial industry.”

Read part one in this series: Legalisation is killing our market, say small-scale dagga growers

As South Africa looks to enter the booming commercial cannabis market, which according to consultancy group Prohibition Partners could be worth up to R27 billion locally by 2023, Nongwanya’s department has repeatedly reiterated the plant’s economic promise for the Eastern Cape, the country’s poorest province.

“We must not be left behind as cannabis is brought into the spotlight and the world jumps to grab their drag on the spliff,” said the department’s MEC Nomakhosazana Meth at a cannabis stakeholder event in East London in August.

But despite the fanfare, Beecee Nombanga, a Manhlaneni community leader, remained sceptical that small-scale growers would see any benefits from a legal trade that he said was geared towards “big companies in big towns who have a lot of resources that we simply don’t have”. 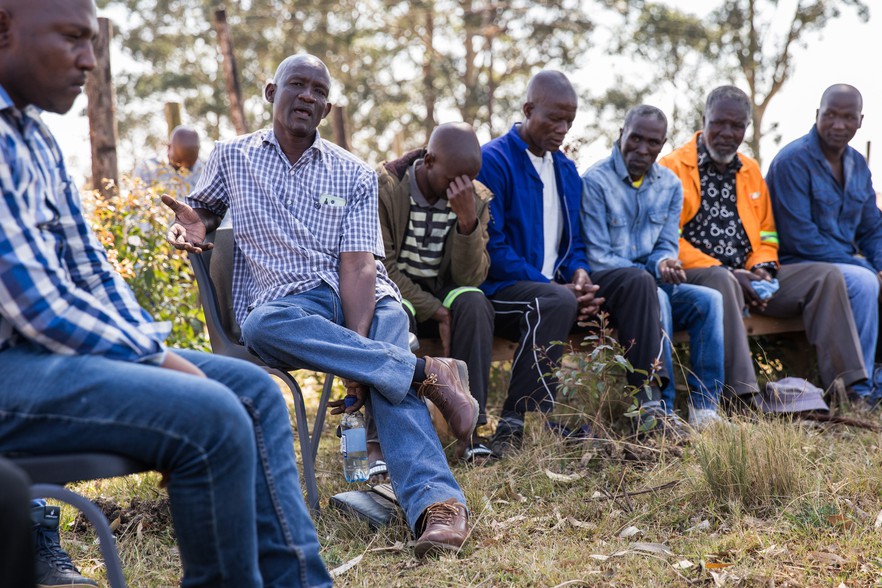 At present, the only route into South Africa’s legal cannabis trade is by obtaining a South African Health Products Regulatory Authority licence for medical marijuana cultivation. As previously reported by GroundUp, this poses considerable barriers to entry for small-scale growers, including prohibitive costs.

The first such licence was awarded to a Durban-based company in April this year and a small handful of others have since followed, all of them major commercial enterprises outside of Pondoland.

“Our people feel betrayed, because all of the licences are being issued to companies from elsewhere, while we who have been growing this plant here for generations, who have the skills, who have the knowledge, who have the land, are still being criminalized,” Nombanga said.

But growing cannabis for the medical research industry is an extremely capital intensive, expensive and highly technical enterprise. Companies growing for this market require highly skilled growers, pharmacists, security and administrators who can navigate the complicated bureaucracy of regulatory authorities, both local and foreign.

Nombanga added that many of the local growers had been afraid to attend a meeting with the visiting government delegation earlier that morning for fear that it was a ruse to have them arrested en masse.

“Our people have been persecuted for generations for selling dagga to raise their families, so of course they are afraid,” said Lulama Nokhele, another community leader, gesturing towards a nearby police station that was opened in the 1970s specifically to eradicate cannabis from the area and remains one of few state services.

“On top of that, we are not being properly informed about the new legal changes. It feels as though we are being left behind,” Nokhele added.

But attorney and cannabis activist Ricky Stone told GroundUp that there were encouraging signs that local government would pay more than lip service to communities that in many instances have subsisted on cannabis for more than 200 years.

“The Premier has established a steering committee to work with the private sector to develop relevant local standards and then to take that to national level to say ‘this is a workable model’,” Stone said. “Whether national will buy into it remains to be seen, but it really is an enormous opportunity.”

In September, President Cyril Ramaphosa attended an imbizo in Lusikisiki, the nearest major town to Manhlaneni, where he noted the role that cannabis cultivation, among a number of other proposed “catalytic projects”, could play in uplifting one of South Africa’s most underdeveloped regions.

According to a 2019 report from New Frontier Data, the inclusion of traditional rural growers is necessary:

“They are often those most in need of the benefits of legalisation, with many cultivating the plant out of financial necessity. Furthermore, if they are not integrated into the regulated market, they will likely continue cultivating illegally, strengthening the illicit market, which could threaten the legal industry,” the report states.

The report also cautions that mounting international interest in the sector, if not carefully regulated, could have negative consequences for small-scale growers, a concern that’s been echoed by a number of cannabis activists.

“Instead of barriers to entry being lowered, and with this the decriminalising of Eastern Cape growers, multinationals are trying to take over the industry,” Jason Law, director of the Cannabis Development Council of the Eastern Cape (CDCEC), told the Daily Dispatch in July.

In the same month, the same paper reported that the king of Western Pondoland, Ndamase Ndamase, was in “advanced talks” with a Chinese company called SA Honglin Investments, which aims to pursue cannabis cultivation as part of a controversial multi-million Rand investment in the “kingdom”.

In a previous Daily Maverick Scorpio article in May, local community leaders claimed that they had not been consulted about plans by Ndamase to lease communally-held land to SA Honglin Investments for expansive mining, tourism and agricultural ventures in the region.

The King’s spokesperson has insisted that the proposed partnership would make a significant contribution to skills development and job creation. 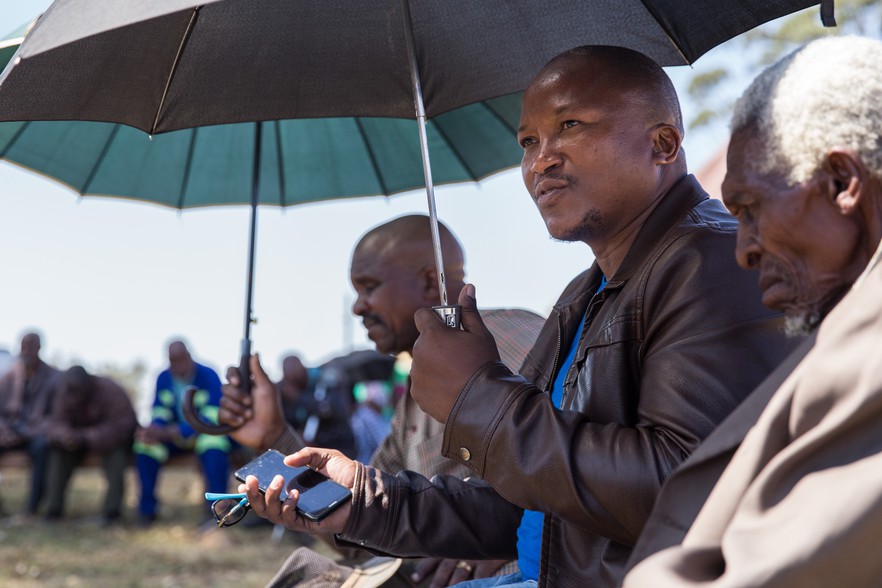 Back in Manhlaneni, the local chief, Luthando Dinwayo, told GroundUp that he was wary of “economic vultures” looking to exploit the area’s history of cannabis cultivation. “But we must also be smart,” he added. “We need to start thinking beyond selling just for recreational purposes. We can also use this plant to make textiles, to make clothes, to make bricks. There is a lot that we can do.”

Stone, the attorney, said that although selling for recreational use may be legalized in South Africa in the future, Pondoland strains have low THC (the main psychoactive compound in cannabis) and therefore would be of “little value” in a legal recreational industry.

Cannabis non-profits including Umzimvubu Farmers Support Network and Fields of Green for All have suggested a model whereby rural farming cooperatives would bring their combined cannabis harvest to a centralized licenced facility within their traditional authority, where it could be graded, taxed and quality controlled. The farmers would be paid according to the grade, then their crop could be fed into the most appropriate commercial market.

In the remote village of Mkumbi – a half hour’s drive, an arduous hour-long hike and a river crossing away from Manhlaneni – local growers continue to harvest this year’s crop to sell into the illicit recreational market, despite falling demand and the persisting risk of criminal charges. 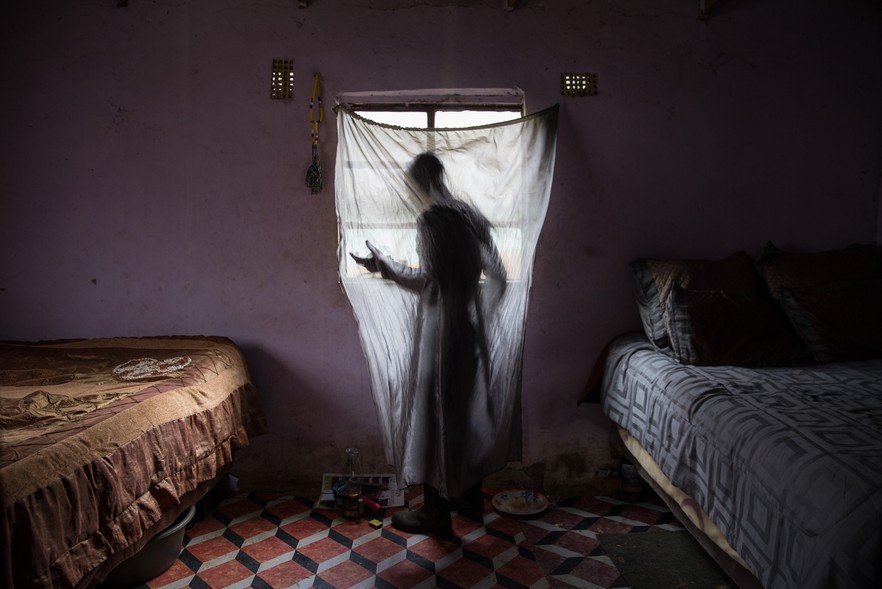 A resident of Mkumbi stands by the window of his home searching for a weak cell phone signal.

“We don’t know what happens to this plant once it leaves here, and we don’t want to know,” said 55-year-old Kululani Makhwahla as she and her 20-year-old daughter Thando returned from their fields carrying large bunches of cannabis on their heads.

“All we are interested in is the money we get to support our families,” she added as she dropped the load in the corner of the family’s rondavel.

Makhwahla told GroundUp she was dubious of government’s promises to assist rural cannabis farmers like her. “We still don’t even have basic services from them, like schools, electricity and water,” she said.

“Or a cell phone tower,” interjected her daughter, as she balanced her phone on top of a stack of plastic water containers against the wall, where she said she could sometimes find a weak signal and receive text messages from friends who had moved away from the village in search of education or employment.

Makhwahla pulled up a small wooden stool and sat in the light of the open doorway, staring at the dirt floor absentmindedly as her chickens pecked at stray cannabis seeds. “I don’t see anyone helping us,” she said. 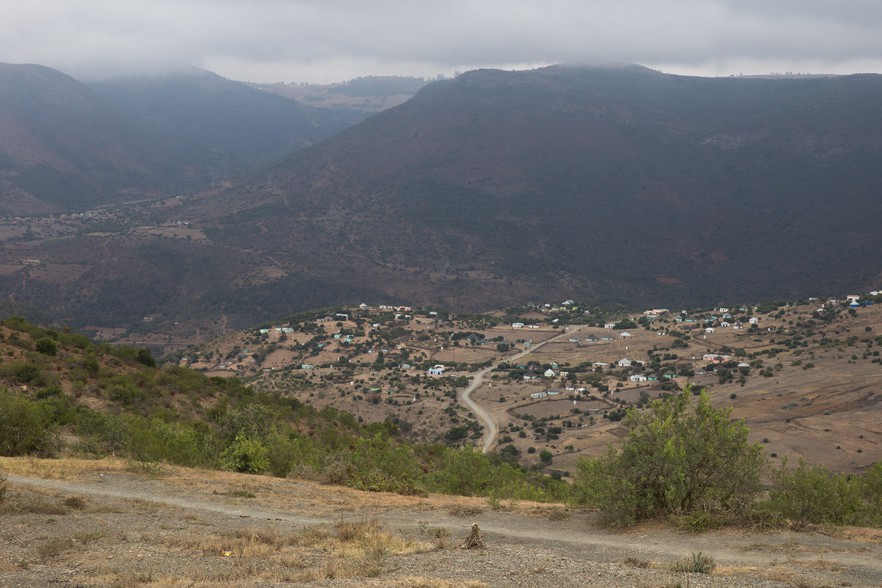 A view over the hills and valleys of Pondoland from the outskirts of Manhlaneni.

Cannabis growers named and photographed in this article not only gave permission for their real names to be used, but emphasised that GroundUp must name them.

Next:  Taxi associations accused of terrorising immigrants in Pretoria