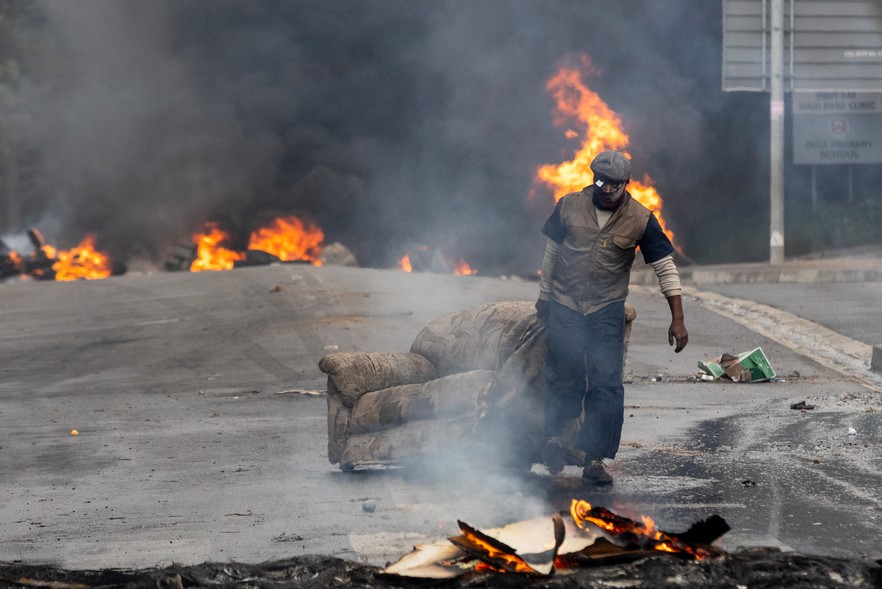 A protester pulls a charred couch from Hout Bay main road where mostly amaphela taxi drivers blocked streets, demanding the City of Cape Town compensate them for loss of income since the introduction of the MyCiTi Bus services in the area.

Amaphela (sedan) taxi drivers brought Hout Bay and surrounding communities in Cape Town to a standstill on Monday. The drivers have vowed to continue protesting until the City of Cape Town pays compensation they say was promised in 2009 when the Llundudno and Imizamo Yethu MyCiTi bus route was established.

More than 50 protesters blocked the roads at Imizamo Yethu Circle, Main Road and Victoria Road with stones and burning tyres demanding a meeting with City officials.

According to protesters, taxi drivers under the Hout Bay Taxi Association in 2009 had signed an agreement with the City that they would be compensated as the new bus services would operate on the route they use, impacting on their client numbers.

The drivers told GroundUp that they had several meetings with the City but each time were told that payment would be made by 2014 but this never happened. They then approached an attorney in 2019 who is helping them take the battle against the City to court. 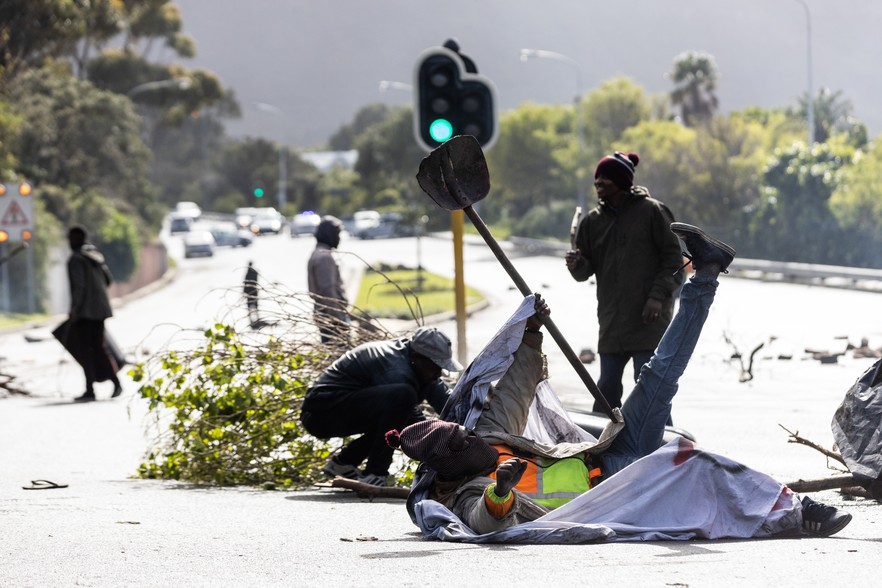 Protesters barricade streets near the traffic circle outside Imizamo Yethu in Hout Bay.

Attorney Anneke Whelan said the City kept moving the goalposts on when the funds would be paid and this frustrated members of the association as they were the only ones who had not yet been paid.

Whelan said: “The City bizarrely contends that the implementation of the MyCiti bus service has caused the Hout Bay Taxi Association’s members’ business to improve.”

According to papers filed at court, the members of the association are claiming damages from the City. Depending on the size of their sedan taxi some are claiming R279,700 and others R283,000 plus interest and costs.

Drivers who spoke with GroundUp anonymously said the City’s proposal to add a new route between Hout Bay and Wynberg further jeopardises their ability to make an income. “We are not going to allow that,” said one driver. 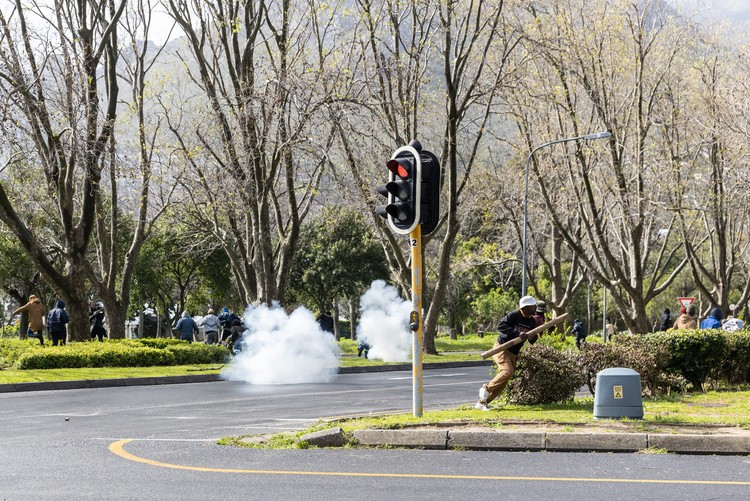 When we arrived in Hout Bay some protesters started throwing stones at the police. Police responded by using rubber bullets and stun grenades to move the crowd away from Victoria Road. 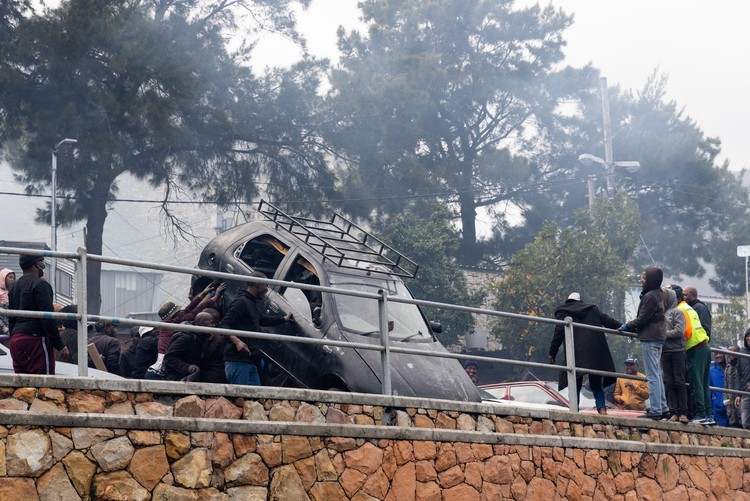 Protesters attempt to throw a vehicle into the street. They were unsuccessful.

In a statement following the protest, the City said it had suspended its MyCiTi and Dial-a-Ride services in Hout Bay. This left hundreds of people who rely on the services stranded.

“We have confirmation that three MyCiTi buses have been stoned in Imizamo Yethu, one of which was petrol bombed. Thankfully, we have not been informed of any injuries to passengers or bus drivers,” said Mayco Member for Urban Mobility Rob Quintas.

In response to their demands for compensation Quintas said, “The City has been engaging with the Hout Bay Taxi Association since 2014 and will continue to do so. This matter is currently on the Western Cape High Court roll, and the City is awaiting the court’s ruling on this matter.”

Police are still monitoring the area. A case of public violence has been opened. 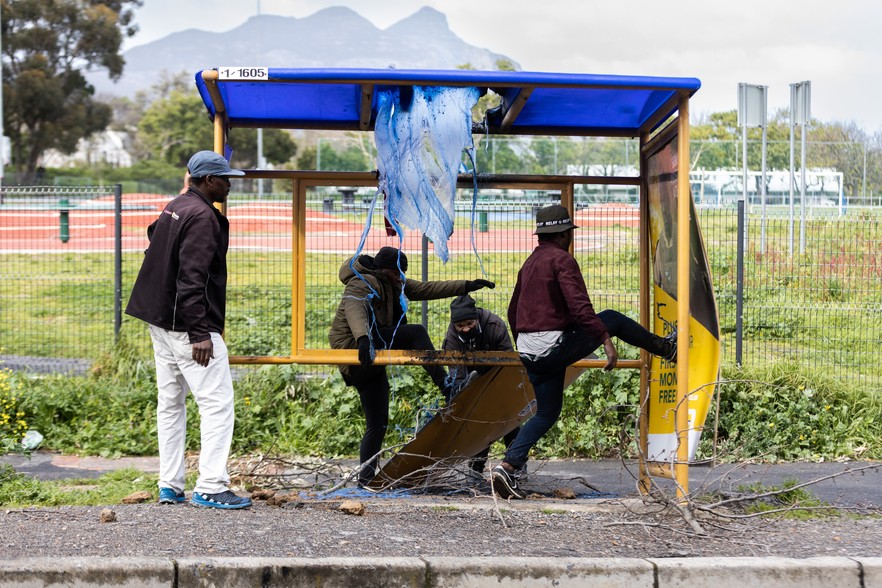 A bus stop near traffic circle near Imizamo Yethu was also vandalised and partially burnt.

Next:  South Africa does need some gas in the energy mix – just not the kind Gwede Mantashe wants