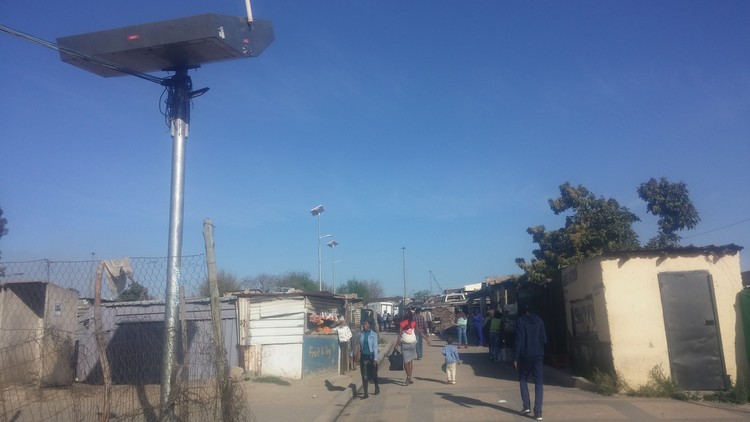 These are some of the solar powered streetlights installed in Extension 1, Diepsloot about three years ago. But they no longer operate according to residents. Photo: Chris Gilili

“Life here has been hell without electricity and we are fed up,” says Rider Sithole. He is a community leader in Diepsloot’s Extension 1 where residents in about 600 shacks say the City of Johannesburg has ignored their pleas for electricity for years.

The area is overpopulated with informal shacks and inadequate communal toilets and taps. Faulty and smelling sewer water covers the streets and footpaths. Rubbish is also strewn all over.

According to Sithole, who has lived in Diepsloot for two decades, the City installed solar towers and streetlights three years ago. He says the lights only worked for a week and were never fixed.

“Without working street lights, we are always victims of criminality. Criminals wait until it is dark and then they attack. There is a new incident every weekend: robbery, rape or someone being mugged. The councillors know about this but they are not willing to save us,” says Sithole.

Resident Angie Raboshakga says he walks a kilometre over the bridge in order to charge his phone at Extension 2 which has electricity.

“Our kids are affected the most by this because they struggle with studying or doing their homework. I’m forced to sometimes throw away spoiled meat and other perishable stock at my tuck shop. I’m so disheartened. We really need power to survive,” he says.

Patrick Ngwenya says his family collects wood to make a fire to cook and boil water. “Nobody cares about us in Diepsloot. You can’t walk safely at night here, it’s dangerous. Even police seldom patrol this area because they are also sacred.”

GroundUp tried to get comment from Ward 95 Councillor, Julius Maake but he refused after several requests.

Kate Matlala is the chairperson of the South African National Civil Organisation (SANCO) in Diepsloot and was the ward 95 councillor for five years until 2021. She told GroundUp that Extension 1 has never had electricity since it was established in 1990. “We wrote many petitions to the City for electrification,” she said.

According to Matlala, the area first needs to be formalised before electricity can be installed. “The City needs to first determine the population size and create streets. However the project to formalise Extension 1 was hindered by infighting between local businesses and the City. So it might even take longer for electricity to be installed there,” said Matlala.

Diepsloot’s Community Policing Forum (CPF) secretary Kutlwano Moalosi said, “Criminals take advantage of the darkness. This makes our job very difficult. Patrolling this area at night is a nightmare. Some people get robbed and stabbed.”

He said the infrastructure in the area was also a challenge for the CPF and police because vans can’t navigate through the shacks. “Officers are forced to leave their cars on the main streets and walk in. This is a serious problem. More so at night,” he said.

According to Moalisi, the CPF is also consistently engaging with councillors to urge that Extension 1 be formalised and electrified to fight crime easier.

Next:  Government defends its decision to end Zimbabwean permits