Mthatha patients wait in the rain at clinics from 3am

“For years we have been treated like this, but it’s worse since Covid.” 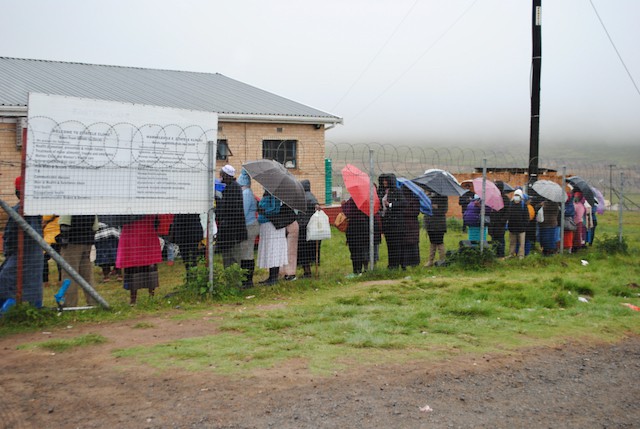 People queue in the rain at Zithathele Clinic in Nyangilizwe. All photos: Mkhuseli Sizani

People complain of poor and rude service and long queues at state clinics in Mthatha, Eastern Cape, while at the Bedford Orthopaedic Hospital patients say they wait weeks for surgery.

This week we went to see the situation at Stanford Terrace, Civic Centre, Zithathele, Ntapane and Mthatha Gateway clinics.

It was raining heavily on Monday and we found pregnant women, mothers with newborn babies, elderly and people with disabilities taking cover under trees. Some had umbrellas. People had been queuing outside from as early as 3 and 4am. The clinics open at 8am.

Since the Covid pandemic, several clinics have stopped allowing people to wait indoors and chronic medication is given to people outside at the gate.

Last month, we reported how women wanting abortions sleep all night outside this clinic.

On Thursday morning about 300 people were queuing and sitting on the pavement outside the Mthatha Gateway clinic.

Thulisile Nzimande, from Chris Hani Park, said he left home at 3:30am. “I wanted to be first in the queue, because this clinic is always full. The nurses allow 30 patients at a time inside the waiting room that looks like a shack … We wait two to fours before we are attended to.”

“There is no booking system in place. For years we have been treated like this, but it’s worse since Covid.”

A 65-year-old from Ngcambele Village said she arrived at 4am and was already 13th in the queue. She said there was a booking system if one wanted to see a specialist, but it didn’t work. “We end up shouting at one another if someone does not stand in the queue,” she said. 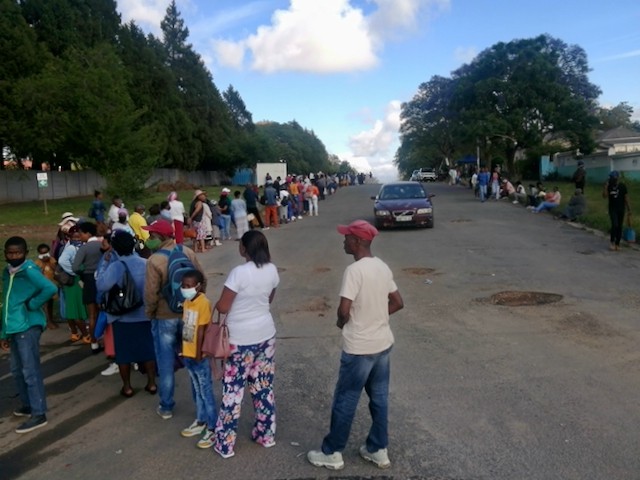 People queue from 3am to get service at Mthatha Gateway clinic

At 6:30am on Monday, there were already about 80 people outside Stanford Terrace clinic, waiting in the rain.

Among them was Olona Ncapayi, who had brought her baby for immunisation.

“We are freezing outside. Most of us are carrying blankets to keep warm,” said a diabetes patient from Chris Hani Park. She complained that nurses only started seeing people at 9am.

Zimasa Samnka said she was turned away by the clinic on Friday 5 November and told patients are not served after 1pm. 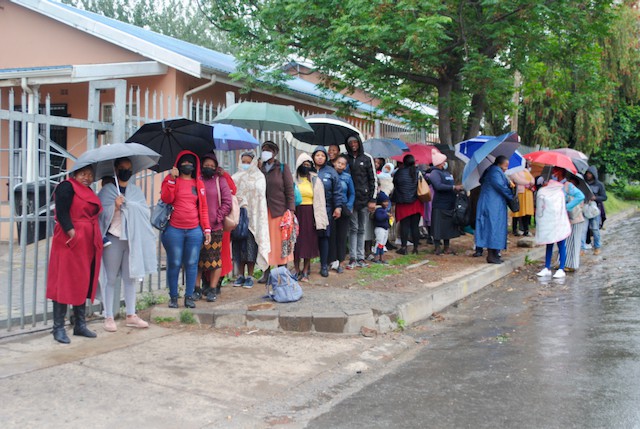 People wait in the rain for hours outside Stanford Terrace clinic

About 50 patients were queuing in the cold outside the Civic Centre clinic next to the N2. A woman who said she’d been queueing since 6am said the clinic took three hours just to see ten patients.

“Most of us are often turned back home without being helped, hence we come very early,” she said. She did not want to give her name. 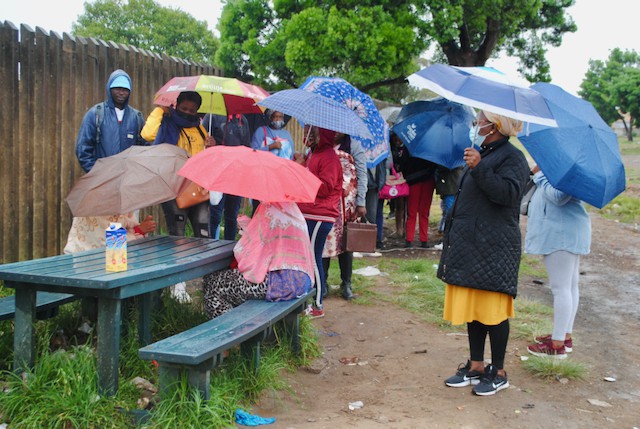 By 8am, there were 85 people standing in the rain outside Zithathele Clinic in Nyangilizwe.

A nurse was checking clinic cards. “I don’t care whether you had bereavement or a dream about your calling, [but] we don’t accept apologies for those who miss their clinic appointments,” she told the people in line.

A young woman told GroundUp: “I am five months pregnant but I have to also queue in this rain until my name is called. There are no chairs provided. If we are tired we sit on this uncut grass. But today it is raining and it is difficult to sit down.”

Zameka Magudumeji said the staff are rude. They do not care for elderly, disabled and pregnant people, she said. 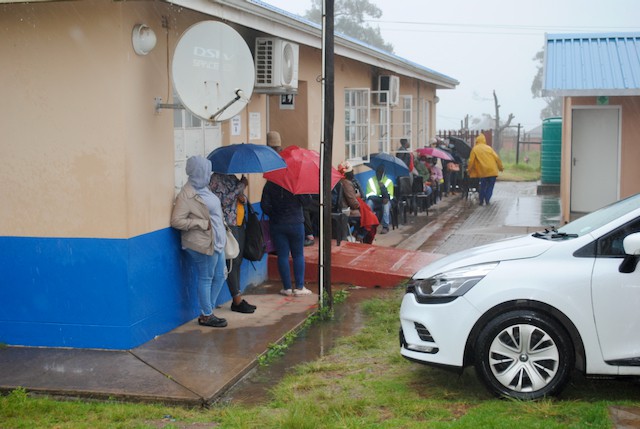 The health department says it will investigate allegations that Ntapane Clinic doesn’t service people on Fridays.

At Ntapane Clinic in Corana, a pregnant woman who had tried to have a checkup on 5 November, said nurses told her they use Fridays as their day off and do not see patients. The nurses apparently said it was because they were the only clinic that opened at 7am.

“What is even worse, when you bring a very ill person on a Friday these nurses tell you straight that they are not serving patients on that day. You must hire your own transport and send the patient to another clinic or hospital,” said the woman.

But Yonela Dekeda, acting provincial health spokesperson, said, “All the clinics operate from 8am to 4:30pm from Monday to Friday. There are, admittedly, pressures resulting from the Covid pandemic that require that health services be reconfigured and re-purposed.”

Dekeda said they would investigate the complaints about Ntapane. Dekeda said Stanford Terrace serves a population of over 20,000 people and has nearly 4,000 appointments a month. She said teams sometimes worked after-hours in order to meet the demand. There was a waiting hall, but it only took 50 people. 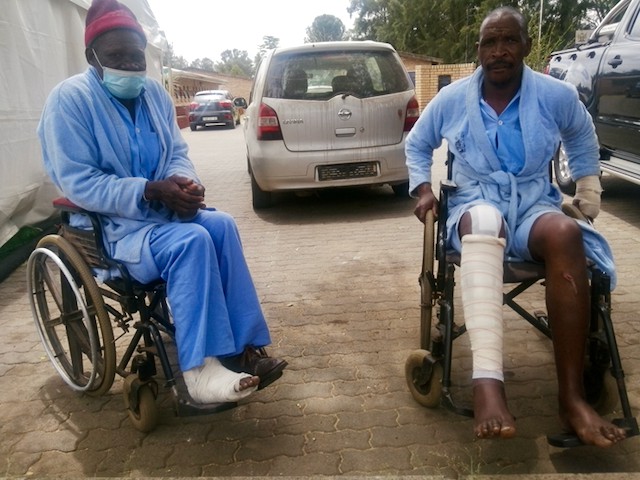 Gcinikhaya Vusani and Mkhanyiseli Ntlomelo catch a bit of sun in the parking lot at Bedford Orthopaedic Hospital. Both have waited six weeks for surgery. Photos: Mkhuseli Sizani

Meanwhile at Bedford Orthopaedic Hospital people complain that they have to wait weeks for surgery.

On 25 October we met Mkhanyiseli Ntlomelo, from Mqanduli, in his wheelchair. “I was admitted here on 3 September after I was assaulted … My leg and arm were broken … I was only taken to theatre on 15 October.”

“Nurses keep on dressing our wounds with bandages and also give us painkillers.”

He said his arm had still not been operated on.

Gcinikhaya Vusani, from Engcobo, also uses a wheelchair. He said he was admitted on 6 September.

“I broke my knee … But until today I have not been taken to theatre … My life has been brought to a standstill.”

“I am the only breadwinner at home. By now, I should be at home directing my five children and wife on how to plant for the summer season.”

Another patient, who did not wish to give their name, said, “I was admitted on 17 October after I was shot … The bullet is still in my arm.”

A patient from Port St Johns said he had spent almost a month waiting to see a doctor. “Both my arm and leg were broken after being assaulted … I don’t know how long I will wait.”

Dekeda said cases are triaged, and that the department is working to set up a 24-hour theatre as well as surgical camps “to catch up on the backlog”.

She did not answer our questions about the shortage of doctors and how many doctors are currently available at the hospital.

Next:  Principals are drowning in the education department’s admin demands