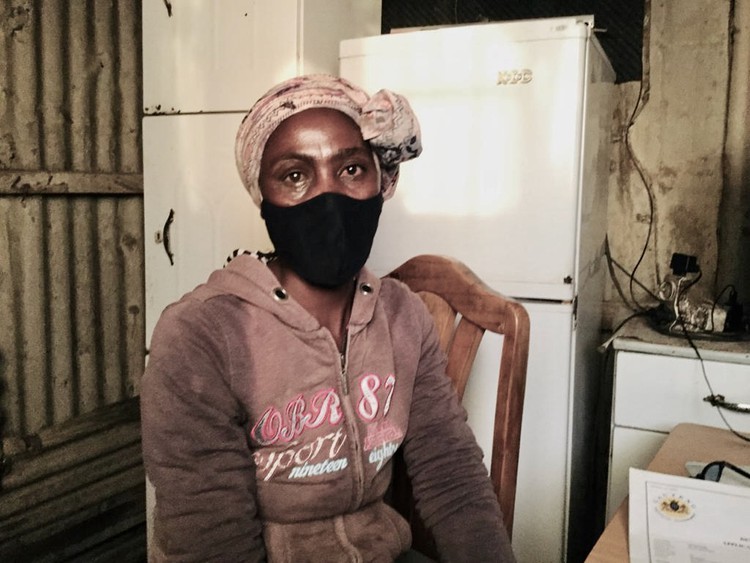 Sphiwe Mdluli has been on the waiting list for a home of her own from government since 2004. Photo: Kimberly Mutandiro

Despite being partially blind, Siphiwe Mdluli has been on the waiting list for a home of her own from government since 2004. Now, the owner of the shack she is renting wants it back and she has nowhere else to go.

“I cannot see properly, but l have been walking around all sections of the township looking for a place to live. No one will give me a place,” says Mdluli, who lives in the Langaville Extension Six informal settlement in Tsakane.

She has been renting her current shack for five years and pays R300 a month. She was a domestic worker but is unemployed because of her poor eyesight. She lives with her four children.

Residents in the informal settlement have started to be moved to Extension Four, where a housing project is to commence. Already 200 toilet structures have been built there. The owner of the shack where Mdluli lives wants to be present so that he may also be moved when his house is allocated, which is why he wants Mdluli out.

Mdluli has been hoping for an RDP house since she registered for one in 2004. She says she goes every week to the Alberton housing office and the local office in Tsakane. Officials told her that houses were currently being allocated to people who had registered in 1996, she says.

“These forms prove that l applied for housing,” she says, showing GroundUp a receipt from the Gauteng department for housing. She says she always shows the forms to prospective landlords to show that “l will not be bothering them for long, because my house will be approved one of these days. Sadly, that has not been enough to get me a place.”

“She cries all the time and does not sleep at night,” says Mdluli’s daughter, Delisile Manana, 26. “Sometimes we wake up in the morning only to find that she has already gone out because she wants to find us a place to live.”

In 2016, Mdluli was diagnosed with eye cancer and her right eye was removed at Johannesburg General Hospital in 2018. She also underwent fibroid surgery in 2019. She applied for a disability grant, but was only paid out for one month. It was stopped because she had not produced letters from the hospital to prove that she could no longer see properly.

“I do not have money to travel to Joburg hospital to get papers. As soon as l can raise the money, l will go,” she said.

Meanwhile, her landlord, Linda Skosana, has his own problems. He lives with his wife and children in the home of another family. He says he helped Mdluli because she’d been struggling to find a place.

“People will be moved to Extension Four, but l have not received a letter of confirmation about when they will move us. The fact of the matter is l need the place for myself and my children as l have no place of my own.

“There have been cases where shack tenants have cheated landowners when the place gets approved for housing by claiming the land as theirs, simply because the owner lives elsewhere. I’m not saying this will happen, but that land is the only place that l can call my own,” he says.

“Even if l can get an empty space to build another shack that will be fine,” says Mdluli. “Until then l will walk as far as my feet can take me.”

She has asked the local councillor if there is any vacant land.

Ward 81 Councillor Makhosaza Gloria Gwayana (ANC) told GroundUp: “Housing offices are currently closed due to Covid-19. There is nothing much that can be done now. There are many forms belonging to people waiting for houses in the housing provincial office waiting for vetting. The office currently has a backlog of people who applied in 1996 whose papers have not yet been processed. However, there is no guarantee because it is only people who meet requirements who will be approved by the provincial housing office provided that there are housing stands available.”