“Our children’s blood is flooding the sea. It feels like there’s no way out for us.” 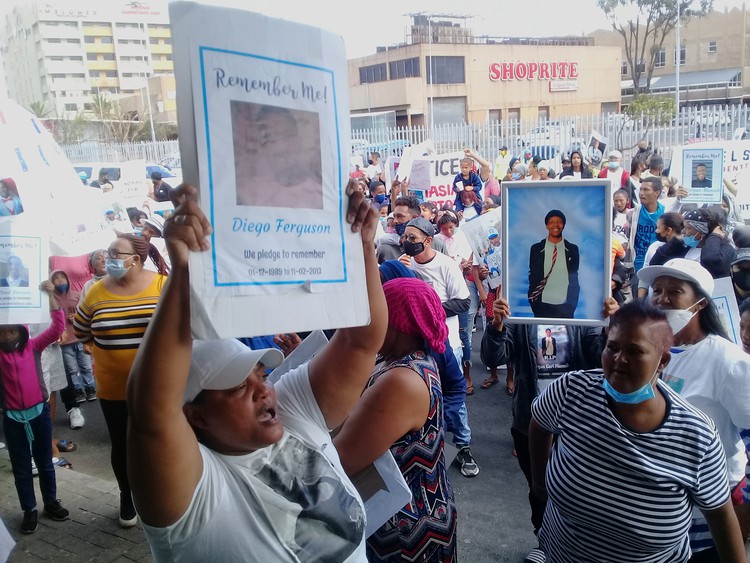 Zelda Ferguson (centre) holds up a poster of one of her two sons who were murdered in Mitchells Plain. She joined dozens of residents who marched to the police station on Sunday, demanding an end to crime. Photo: Marecia Damons

Zelda Ferguson from Eastridge, Mitchells Plain still mourns the loss of her two sons who were both murdered in separate incidents in the area.

On Sunday, Ferguson joined over a hundred people who marched from Cadillac Street in Beacon Valley — where several young men were recently shot dead — to the police station to demand better policing and highlight the spike in shooting incidents in the community.

The march, led by the Mitchells Plain United Residents Association (MURA), the Community Police Forum and the Neighbourhood Watch Association, was attended by both young and elderly residents from different parts of Mitchells Plain.

They handed over a list of demands to SAPS, but also addressed it to the Western Cape Government and City of Cape Town. The demands include establishing a Mitchells Plain-based gang unit, installing effective surveillance cameras in crime hotspots, establishing a local Drug Action Committee, and implementing a special safety plan for the area.

According to the quarterly crime statistics for October to December 2020 eight out of the ten police stations with the highest reported drug-related crime cases are in the Western Cape, with Mitchells Plain having the most drug-related cases. This is followed by Bishop Lavis, Atlantis, Steenberg, Kleinvlei, Cape Town Central, Lentegeur and Delft.

Police stations in Elsies River, Delft, Manenberg and Mitchells Plain were also among the top ten for the highest number of attempted murder cases in the Western Cape. Although violent crime dropped during the hard lockdown, the Western Cape had an 11% increase in murders in October to December 2020 over the same period in 2019. Attempted murder cases also rose. One promising statistic though is that contact crime in Mitchells Plain dropped in this period by 28%.

During the march on Sunday, Ferguson explained that one of her sons, Diego, was shot six times in Eastridge in 2013. He was 23 years old. She said police dropped the murder case “due to a lack of eyewitness accounts”.

Her second son, Keanu, was only 17 when he was fatally stabbed on 26 January 2020 in Lentegeur. Ferguson said that nearly 14 months after Keanu’s murder, there have been no new developments in his case and his killers were probably still on the streets.

“We’ve had enough of this crime. Our tears are filling the oceans. Our children’s blood is flooding the sea. It feels like there’s no way out for us. It feels like no one is taking any notice of us. Look at the crime statistics. It’s going up daily, and what is SAPS doing for us?” asked Ferguson.

Linda Jones of MURA said because community members were usually the first ones to arrive at a crime scene, they needed to speak up and report what they witnessed. “Our parents need to come out and admit to their children’s crimes. They support their children out of love, but by doing so they’re condoning what they are doing. We can’t only expect the government or SAPS to change our communities.”

“It’s our young men who are partaking in these heinous crimes. They’re as young as 13 in court for murder. They’ll become younger by the day. Unless our government treats these as acts of terrorism, it will continue,” said Jones.

When residents arrived at the police station, Community Police Forum chairperson Norman Jantjies encouraged residents to join neighbourhood watch groups and to work alongside police in their area. “Most of the shootings between gangs are about drug territory. If we don’t address the issue of drugs head-on, we’ll never be able to address the broader issues of gangsterism in our community,” said Jantjies.

Lieutenant Colonel Elroy Finck accepted the memo on behalf of SAPS and Advocate Leslie Morris accepted it for the province and mayor’s office.

“Your plight to live in peace is not falling on deaf ears,” said Morris.

The community has given police, the City and provincial officials until 7 April to meaningfully address their demands.

Next:  Parents shut school to force education department to pay its bills