Evicted families stuck in Paarl caravan park for a year

About 52 families have been living in green canvas tents for more than a year at New Orleans camping site in Paarl South. They were evicted from farms in the surrounding Cape winelands, including Simondium and Wellington.

The Drakenstein Municipality has offered the campsite as emergency accommodation, but is unable to say when the families can be moved to suitable accommodation.

Evictions in the broader Cape winelands and in Drakenstein Municipality have created a crisis. At least 20,000 people are at risk of eviction on Drakenstein farms.

When the day campers leave, we go and check for a piece of meat or other leftovers

“When the day campers leave, we go and check for a piece of meat or other leftovers so our children have something to eat,” said Elsabe Goeieman, one of those living in the caravan park. “Sometimes they [day visitors] feel sorry for us and give us their leftover foods.”

Her family, together with most of the families in the park, were moved to the New Orleans camp after being evicted from a property in Simondium known as Die Blou Huis on 11 April 2018.

GroundUp met Goeieman sitting outside on a weathered couch with her daughter and three other residents.

“Most of us are unemployed now because we used to work seasonally on farms around Simondium. We are really struggling … but what can we do?” she said.

Goeieman and her husband share a tent with their four children and two-month-old grandchild. Inside, the family have placed makeshift partitions of plastic sheeting and material.

“It gets so hot inside in summer, so we would rather sit outside with the small baby. In winter, the wind blows through the holes in the tents and the tents flood when it rains and our things get damaged … There are also a few people with TB and living in tents doesn’t help,” she said. 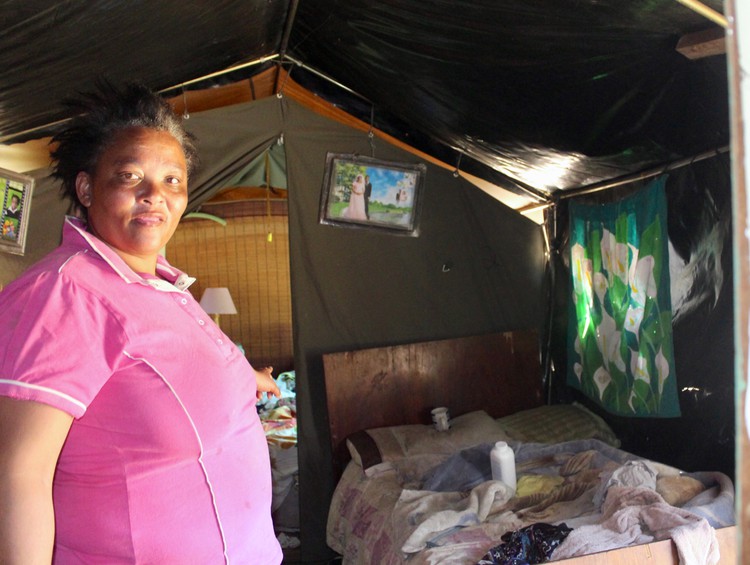 Elsabe Goeieman and her husband having been sharing a tent with their four children and two-month-old grandchild for a year, since being evicted from a farm in Simondium.

Goeieman said that since moving to the park, she had not been able to find a school for her 15-year-old daughter, Michelle. Michelle’s old school was about eight kilometres away from where they lived, and she would walk to school. She was forced to drop out a few weeks after they moved to the park.

Goeieman said that for months after being moved to the park, the children stayed home. Now, the younger children attend New Orleans Primary School, just a stone’s throw away from the park.

“We moved here in April, so we struggled to get our children into schools. The younger children got places, but not all the high schoolers. My child would love to go back, but when I went in January, no one could take her,” said Goeieman.

When the group were first moved to the park, Goeieman said, they were told the tents were temporary and they would be moved to houses within months.

“Drakenstein [Municipality] said they would build us Nutec [fibre cement board] houses, but we are still waiting. We have no idea when we will move … The only upside to living here is that we have electricity and running water,” she said.

The group shares the park public toilets with day campers.

A man living in the park, who identified himself only as Mr Scheepers, said, “Winters are a problem for us … Many of the tents blew over last year and we had to help people in the middle of the night put them back up. So imagine what will happen this winter.”

Billy Claasen, of the Rural Farm workers Development Organisation, said the situation was unacceptable. “The sewerage system is under severe pressure due to the influx of people there. People complain about the conditions there and no one listens.”

Claasen accused the municipality of using the park as a “dumping ground” to house evictees from surrounding areas instead of providing “dignified” accommodation.

Gerald Esau, director of Community Services at Drakenstein Municipality, said its emergency housing plans had been brought to a halt by opposition from the community.

“An emergency housing project with improved basic services is being constructed in an area called Schoongezicht. Unfortunately, it was recently invaded by the surrounding community who refuse for these evictees to be accommodated there,” he said.

“Drakenstein Municipality is providing 24-square-metre Nutec structures to the families, but cannot provide a timeframe as we are not sure how long the negotiations with the surrounding community will take,” said Esau.

Last month, a family of 11, evicted from the Windmeul Kelder wine farm, repeatedly rejected the municipality’s offer to house them at the caravan park. The building offered to them, which was being used as a washroom, is not big enough to house them and their belongings. The family is currently sitting on the R44 roadside. 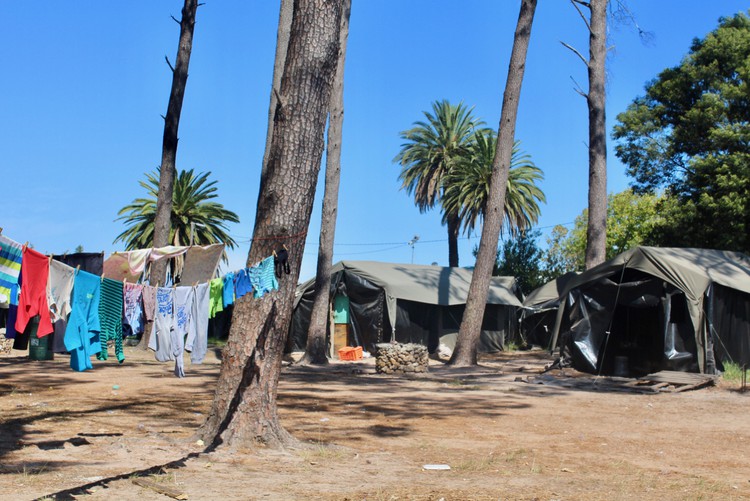 The Drakenstein Municipality has offered the New Orleans campsite as emergency accommodation for people evicted from farms but it is unclear when the families can be moved to suitable accommodation.

Protesters bring road project to a halt in KwaNobuhle