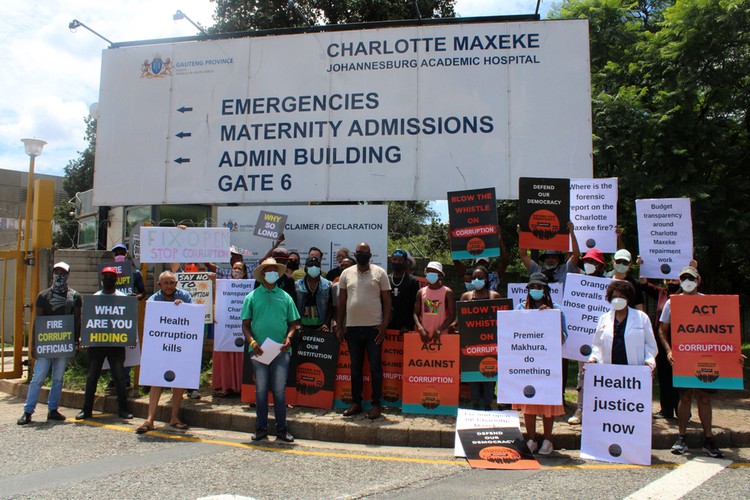 Mathivha joined about 40 people picketing outside the Charlotte Maxeke Hospital on Sunday, demanding that all wards at the hospital be fixed and opened urgently.

The picket, organised by the Defend our Democracy campaign, took place on the eve of Gauteng premier David Makhura’s state of the province address. Picketers demanded that he address the impact of the continued closure of the hospital in his speech.

“We need deadlines and we need those deadlines to be soon because the people of this province cannot wait any longer,” said Sasha Stevenson from SECTION27.

Mathivha said that millions of people access public health facilities in Gauteng every year. “The province’s public health sector cannot afford to have a hospital with more than 1,000 beds down even for one day,” she said.

Charlotte Maxeke has been closed since 16 April 2021 because of a fire. The hospital opened partially in June and is operating at a bed capacity of about 650 beds. The emergency, psychiatry and cardiothoracic wards are just some of the units at the hospital that are still closed.

Health workers at the hospital told GroundUp that they are working in a difficult environment. They are struggling to address surgical and treatment backlogs.

“Some of the lifts are broken, despite the health department] saying they have been fixed. There has also been a delay with getting a CT scan at Charlotte Maxeke so patients are referred to Helen Joseph and Edenvale hospitals. In-patients wait between three days and two weeks for a scan, while out-patients can wait for up to three months,” said Professor Adam Mahomed, head of internal medicine at Charlotte Maxeke.

One of the areas affected by the fire was the parking lot. “You can spend an hour or two just looking for parking,” said Mahomed.

According to Mahomed, a significant number of the hospital’s “highly skilled specialised nurses” have resigned. “When we open the emergency unit in March, we will probably have problems with staffing because a lot of the resignations have come from trauma and casualty nurses,” he said.

During a media briefing at the hospital on Thursday, Charlotte Maxeke Hospital CEO Gladys Bogoshi said the hospital used to see about 74,000 out-patients per month. Since the fire, many of these patients have been referred to hospitals in Charlotte Maxeke’s cluster including Helen Joseph and Chris Hani Baragwanath hospitals, where health workers say they are not coping with the increased patient load.

Mathivha said there are currently insufficient beds in cluster hospitals to treat trauma patients and internal medicine patients. “We have to hustle every day to see who can be prematurely discharged to make space for incoming patients. Cluster hospitals are running out of medicine,” she said.

Wits University uses Charlotte Maxeke as its teaching hospital, but the ability to do this has been severely impacted by the hospital’s continued closure, said Professor Shabir Madhi, Dean of the Wits Faculty of Health Sciences.

“It has compromised Wits’ ability to provide the education required to build the next generation of health care workers,” he said.

Madhi also decried the impact of the hospital closure on patient care. He recounted the experience of a relative who recently died after waiting for days for a bed at one of the cluster hospitals.

“It is not normal to have a 70-year-old person on supplementary oxygen, waiting in a wheelchair in an emergency department for a bed,” he said.

Madhi said the provincial health department has declined offers from Wits University to assist with resources for assessing and refurbishing Charlotte Maxeke.

In a memorandum read out by Duduetsang Mmeti from Defend Our Democracy, the group demanded that the provincial government fix the hospital urgently and reopen critical wards, particularly the casualty ward, immediately.

They also want the provincial government to ensure that the hospital is safe, functional and that fire hazard protection measures are in place. They want the establishment of a joint government and civil society oversight team to monitor the progress of the repair work, as well as the refurbishment budget and procurement process. They demanded an investigation of the Gauteng Department of Infrastructure Development and called for additional capacity and budgets to surrounding hospitals to reduce the burden on “already overworked” health workers.

Mmeti also called on the Premier to finalise and publicly release the forensic report into the fire. Ten months later, the cause of the fire at the hospital is still unknown.

Mmeti requested a response to the memorandum by 1 March 2022.

Thokozani Langa, a manager at the Gauteng Department of Health, received the memo on behalf of the Premier.

Asked why additional funds had not been allocated to cluster hospitals to cope with the increased patient load, Langa said the fire occurred after budget allocations had already been made for the financial year.

He said budget allocations to cluster hospitals would be dependent on the budget allocated to the health sector during finance Minister Enoch Godongwana’s speech next week Wednesday.