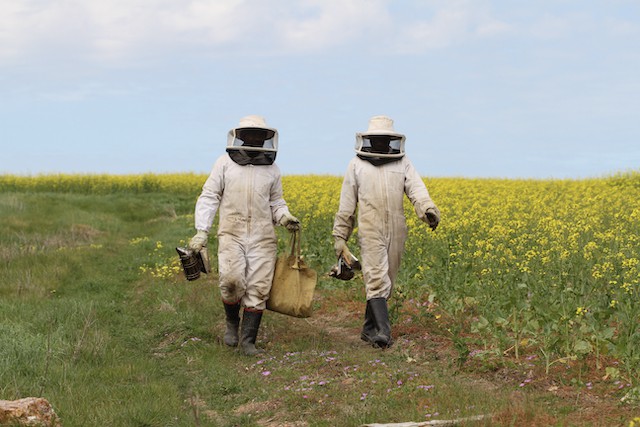 Good winter rains and hot summer weather have made the Western Cape prime breeding ground for honeybees this season, and as a result, bee removal service providers have been inundated with calls for help. But scammers looking for a quick buck and illegitimate bee removers are now also thriving with the newfound demand, undercutting prices by killing colonies rather than removing them.

Ernst Mulder has been a bee remover in Cape Town’s southern suburbs for almost ten years. While demand for his services typically increases in the spring and summer months when an abundance of blooming forage and temperate weather conditions encourage swarming, Mulder says he’s seen an unprecedented increase in the number of bee removal requests over the past year. In December, he was removing up to nine swarms a week, double his heaviest workload in normal years.

Although the number of beekeepers in the region has increased in the past five years, Mulder also believes that heavy rains in recent years have meant an increase in blooms and a lot more food available. Bee numbers have risen.

Lohan Geel, owner of Beelicious Honey bee removal services, has also noted a “huge increase” in the number of calls he received in the last few months. Geel was busy through the winter this year, a rare occurrence for such a typically seasonal industry.

Geel believes the pandemic has played a role. “There were a lot more people looking after their gardens, so there’s more food for the bees in home gardens. With good food, colony birth rates increase, the space inside their hive gets too small, and the colony splits and the new colony swarms to a new location.”

Chris Oosthuizen, founder and director of Honeybee Heroes, a honeybee education non-profit in Stanford Valley, sees a much larger shift in the way we cohabit with the creatures around us.

“As a result of humans taking away so much of their habitat – whether its levelling tree stumps or removing rock formations where they might make their homes, or the many other ways we develop our properties – the bees are forced to migrate to where the food is and where they can live.”

“While bees may have more opportunities for where they can live on farms – because farmers don’t remove as many natural formations from their land – the way we’ve created mono-cropping systems means that the bees don’t have enough food there except for a few weeks a year when that crop is blooming.”

Oosthuizen says we’re going to see more and more bee migration to urban areas in the years to come. 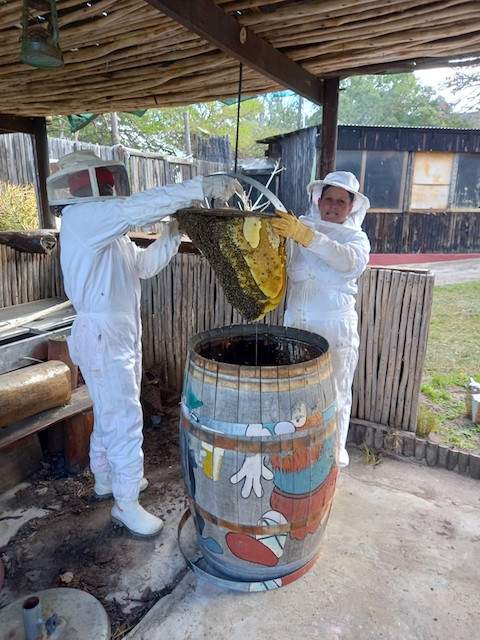 With demand skyrocketing for bee removal services, scammers have stepped in. These “bee removal” services charge a reduced fee, then arrive with a can of poison and kill the bees inside the hive.

With legitimate providers’ schedules getting booked up, it becomes an issue of numbers, says Geel. “I can do two to three removals a day, maximum, whereas a guy with a can of Doom can do one every half an hour.”

“You give a quote. They go to the other guy, and that person will undercut your quote. It’s a vicious cycle, and a lot of us have had to cut our prices significantly to keep up,” says Geel. “Removing a hive safely is a labor intensive process, which is why it’s costly.”

“A proper removal is not just removing them and sticking them in a box somewhere. You have to feed those bees, because you’re taking them out of their natural environment. You have to make them strong again so that they can survive where you’re going to place them. There are costs on the beekeeper’s side to help them live a better life,” he says.

Most legitimate bee removers will have temporary apiaries where they will take the bees, care for them until they’re laying brood again. Then they’ll either move them to a permanent apiary site where they produce honey or sell them to other beekeepers looking to increase their hive count. But fraudulent bee removal service providers don’t have these apiary sites.

“Even some of these guys that take them out alive actually dump them on the ground once they leave your property, because they don’t have a place to take the bees afterwards,” explains Lohan.

“I’ve had quite a few calls when I show up and it was someone that removed the bees, got paid, took the honey and dumped the baby bees – the brood and the larvae – with the rest of the bees on the side of the road. It’s awful.”

He has teamed up with beekeeper John Thornton of Garden Route Honey Producers to offer bee removal courses in Gqeberha and the Western Cape.

“There is no such thing as a colony that cannot be removed alive,” says Mike Allsopp, a longtime beekeeper, bee remover and honeybee researcher. “You can get every colony out alive if you’re prepared to put in the amount of time and money it takes.”

He has removed colonies that took almost six weeks to get out of the hive.

But there are times when it’s necessary to terminate a hive, Allsopp says, if it’s a dangerous situation and people are getting hurt. He recently was forced to terminate a hive that was causing havoc at a pre-primary school, having placed three children in hospital and stinging multiple others. “In that case, it was the right thing to do,” he explains.

There is no legislation in South Africa making it illegal to kill bees. “Someone who has never looked at bees is just as entitled to do a bee removal as anyone else,” says Allsopp. “You can use a bulldozer or a jackhammer or Doom or do anything you like. There are no legal or illegal bee removal people. It doesn’t require a license or certification or anything.”

Allsopp has been advocating for 20 years for licenses, writing legislation in the hope that government would incorporate it into law, and lobbying insurance companies to include infrequent bee removals into their housing packages. But so far those efforts haven’t succeeded because there’s just not enough uproar about the issue.

The regulation of bee removals is complicated because a financial burden would be placed on the homeowner, not just the beekeeper. “Should homeowners be allowed to terminate a bee colony for R300, or should they be forced to pay R2,000 or more to remove it?” says Allsopp. If that financial burden came into effect, homeowners wouldn’t phone anyone but try to poison or remove the hive themselves. This might lead to fewer bees getting saved, because someone who may have been interested in getting a quote for a proper removal will skip that step entirely.

“A person needs to have the necessary insurance, training and equipment before they should be allowed to work with dangerous animals, or they’re going to get themselves and other people hurt,” says Allsopp.

Poisoned bees don’t always die immediately, and often leave the hive and die outside. Other animals like birds may eat the bees and get poisoned themselves.

It’s also ineffective. Even if the colony dies, the honey and comb inside the hive remains, which is a signal to swarming bees of a safe habitat to make their home. That means it’s likely another swarm of bees will soon take the place of the last one, and then the cycle continues: more bees to kill, more bills to pay.

Bees are friends, not foe

Having a bee colony on your property or nearby can be a blessing. “There are many people who happily share their properties with a bee colony,” says Oosthuizen of Honeybee Heroes. You shouldn’t remove them unless they are problematic.

The only time a removal should be necessary, he says, is if the bees move into a location where you walk frequently in their flight path or disturb their hive with movement or sound, which could trigger defensive action from them.

“The bees are just doing their day-to-day thing, just like all of us. If you leave them alone, they’ll do the same to you. But if you get too close, keep in mind that you’re a burglar, and they’re going to defend their home, just like any of us would.”

“All honeybee colonies have their own personality, and some are docile while others are a bit more energetic. But in general, South African honeybees are just like the rest of us South Africans – hardworking, resilient, and a little fiesty,” Chris says with a smile. 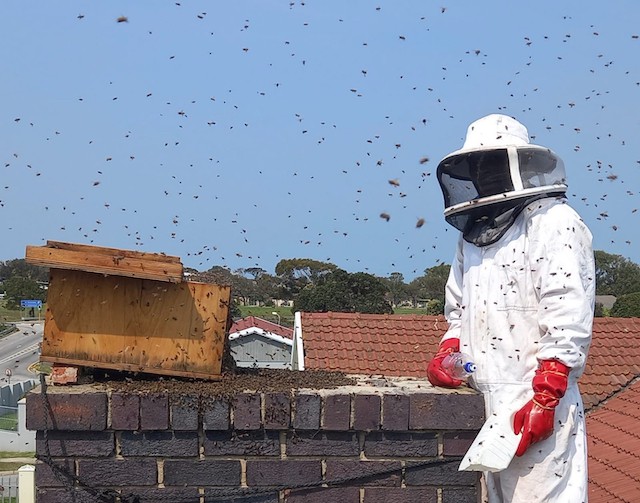 A member of the Beelicious team removes a hive from a wall. Photo supplied

Have bees? Here’s what to do:

If you have a honeybee colony in an unwanted location on your property, the most important thing to do is to call a qualified removal provider. Do not try to remove the hive yourself as it poses a safety risk. Don’t forget to notify your neighbours if you’re scheduled for a bee removal, so that they can ensure their families and pets are indoors for the duration of the process.

How to identify a legitimate bee remover

Next:  Durban metro and KZN Premier fail to help immigrant traders after attack