One dead, 13 due in court after protests and looting in Bloekombos

“We are willing to move elsewhere. We just want a place to stay” says occupier 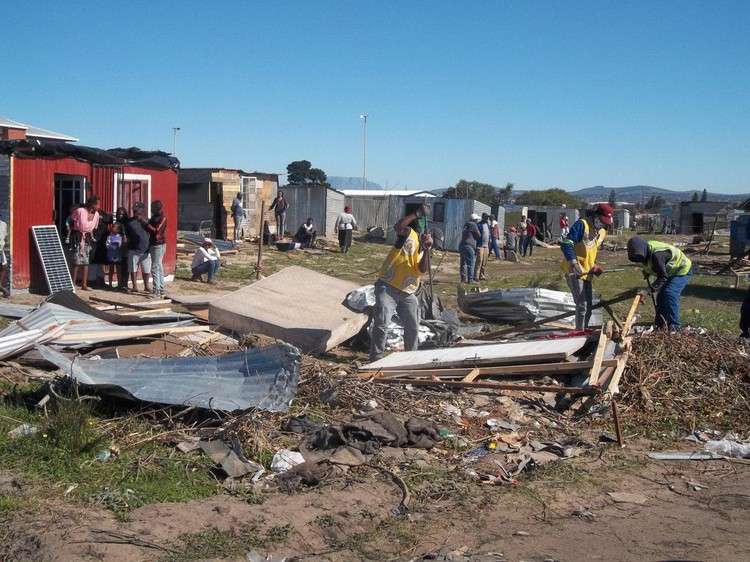 Thirteen people are to appear in the Blue Downs Magistrate court on Tuesday for public violence following protesting and looting in Bloekombos, Cape Town at the weekend.

Police are also investigating the death of a 19-year-old woman who was apparently shot during looting at a trucking business in Kraaifontein. Western Cape police spokesperson Brigadier Novela Potelwa said a 62-year-old man had been arrested in connection with the shooting.

Potelwa said that about 500 protesters stormed the trucking business near Old Paarl Road after setting alight a delivery truck outside its premises. “As the [angry protesters] forced their way into the premises, the [accused] fired a gunshot and the 19-year-old was hit in the head,” she said.

For the past few weeks, the group have been erecting structures on property around the Tygerberg Raceway.

A senior official in charge of the operation on Friday told GroundUp that the City of Cape Town had only demolished unoccupied and unfurnished shacks. However, GroundUp saw several shacks with beds in them being demolished.

One occupier, Inathi Sigaba, was seen begging officials to spare her shack which contained a bed and blankets. An official explained to her that for a shack to be considered furnished and occupied, it must contain a bed, clothes and other things.

Sigaba said she moved onto the land after her landlord in section 16 evicted her. She could no longer afford the R650 rental fee. She recently lost her job as a cashier at Makro in Tygervalley, she said.

The Community Advisory Services (CAS) has called on the City to set aside a piece of land for the former backyarders to build their shacks near De Nova outside Bloekombos in Kraaifontein. CAS is a community-based organisation established to “eradicate poverty and uplift the community” in Kraaifontein.

CAS founder Linda Phito said: “We have seen former backyarders engage in violent protests. Our worry is that the land that they want is meant for projects that are to benefit the community.”

Phito said the City should halt its Maroela Project, which is expected to accommodate 120 RDP houses, until it finds an alternative land for the land occupiers.

“We are willing to move elsewhere. We just want a place to stay,” she said.

“Hundreds of vulnerable beneficiaries who have been waiting stand to lose housing opportunities. The City will continue to stand up for its communities and beneficiaries of projects and services,” he said.

Next:  Old age homes on the brink of collapse as provinces cut funding

Previous:  Lockdown in pictures - Day 137: Elephant in the sand