Fire kills one man and destroys 200 shacks in Cato Manor 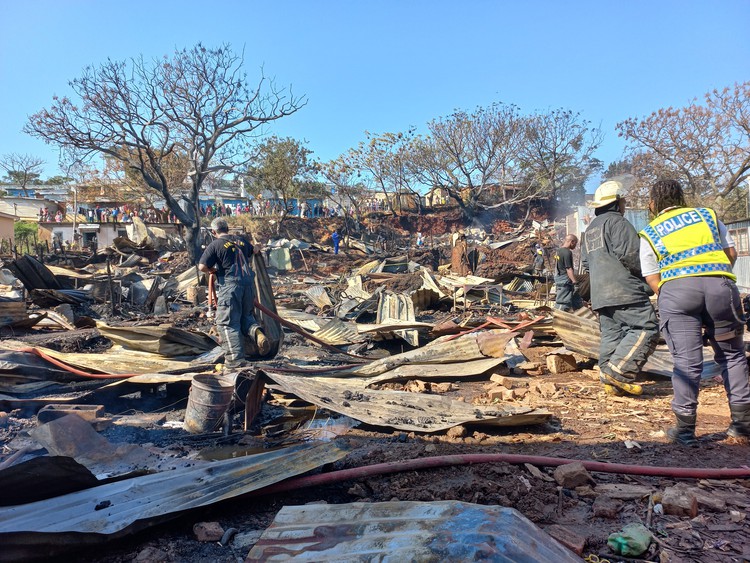 Emergency workers clearing the area after one man died and 200 shacks were destroyed in a fire at Marikana informal settlement in Cato Manor, Durban on Thursday. Photo: Nokulunga Majola

One man died and about 200 shacks were gutted in a fire at Marikana informal settlement in Cato Manor, Durban on Thursday.

Police spokesperson Colonel Thembeka Mbele said an unidentified man was burnt beyond recognition. “An inquest docket has been opened at Cato Manor SAPS. the incident is being investigated,” Mbele said.

Residents are speculating that the unknown man was visiting in the area and had been walking between shacks when the fire erupted after the power had been out that day.

“Maybe someone left appliances on when the power went off in the morning and when the power came back, it started the fire. This is the biggest fire we have ever seen. A lot of people lost their belongings. We are left with nothing,” said resident Sbusiso Khuzwayo.

This was the third fire in eight months at Marikana. In April this year, we reported on the fire where Nomasamson Dlamini died and 16-year-old, Cebo Mpiliso was injured.

Residents blame illegal electricity connections for most fires in the settlement. They say because shacks are close together, when there is a fire, many shacks get hit.

Nkosingiphile Dlamini who lives with his girlfriend and two children said they lost everything in the fire. He spent the night outside while his family went to sleep at a friend’s place nearby. “If we don’t get material to rebuild, we are most likely going to spend another night sleeping outside,” said Dlamini. He is unemployed and survived by renting out shacks in the settlement. He said all his shacks burnt down, leaving him with no income.

The City’s Disaster Management team visited Marikana and wrote down the names of the victims. They promised to return to provide assistance.