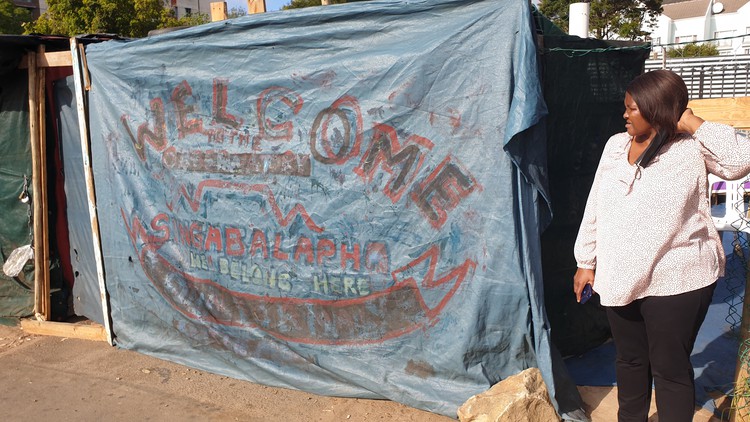 Barbara Vuza has been living outside the former Arcadia House old age home in Observatory since 2020 along with about 30 other families. Photos: Mary-Anne Gontsana

Judgment was reserved this week in the case brought by the City of Cape Town to overturn an interdict preventing it from evicting about 31 families living in tents and shacks along the main road in Observatory. The group of mostly backyarders have named the area “Singabalapha”- ‘We belong here’ - informal settlement.

They originally occupied the Arcadia House old age home, owned by the Cape Peninsula Organisation for the Aged (CPOA) in May 2020. They were evicted and the building was demolished. Then they settled on the lawn outside and obtained an urgent interim interdict preventing the City from evicting them.

At the time, Acting Judge Selwyn Hockey accused the City of using its bylaws as a “quick fix” to evict the occupiers and said the City was “abusing bylaws” to circumvent the provisions of PIE (the Prevention of Illegal Eviction and Unlawful Occupation of Land Act).

The City approached the Western Cape High Court to overturn the interdict. The matter on Monday was heard by Judges Patricia Goliath, Kate Savage and James Lekhuleni.

Advocate Ismail Jamie for the residents argued that the way in which the bylaws were being implemented was “unconstitutional and unlawful” and that the residents were under constant attack by the City.

Advocate Karrisha Pillay for the City disputed this, saying there was no evidence that occupiers’ items had been confiscated. She said video evidence of action by law enforcement officers showed no serious aggression towards occupants. She said no bylaw had been used to evict the residents.

Judge Goliath said they were concerned that upholding the interdict could “paralyse” the City in this matter and future similar matters. 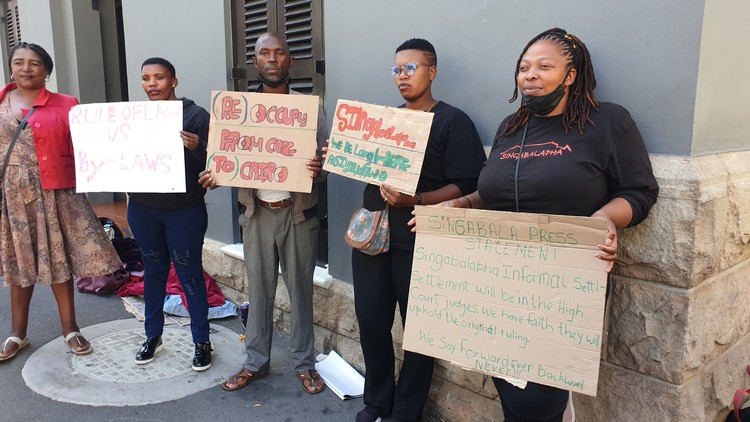 Some of Singabalapha informal settlement residents picketing outside the Western Cape High Court on Monday.

Barbara Vuza lives with her sister Mase and eight other relatives in a small, dark, wood and zinc structure. She says there are about 31 homes in the settlement.

“There’s no electricity here, so we use candles. We have no toilets or taps for water,” she said, pointing to five 20-litre bottles. “For a toilet, we use buckets or we ask to use the toilets at the Pick n Pay nearby,” said Vuza.

Vuza says she has been on the City’s housing list since 1985 and her sister since the 90’s. They want the City to allocate them houses, give them land or renovate vacant existing buildings near the city centre.