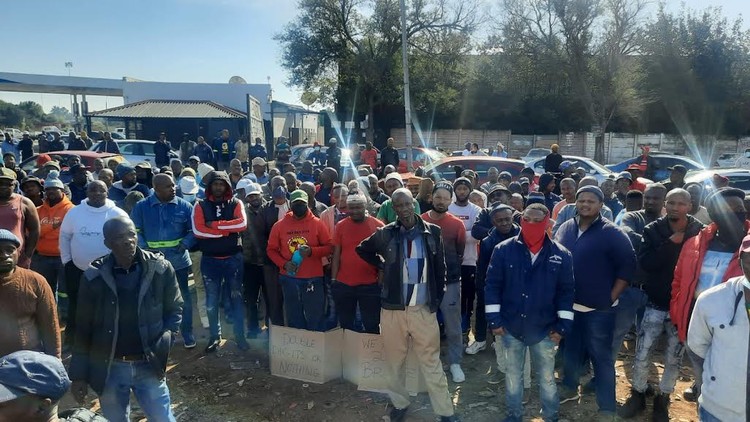 Some of the workers at steel giant ArcelorMittal who downed tools on Wednesday are expected to return to work on Thursday after the employer succeeded in getting an interdict, said the National Union of Metalworkers of South Africa (NUMSA).

The workers are demanding a 10% wage increase. The union held demonstrations in different parts of the country where the company has operations, including Vanderbijlpark and Newcastle in KwaZulu-Natal.

As well as a 10% wage increase across the board, NUMSA wants ArcelorMittal to pay 80% of medical aid contributions and to scrap labour brokers and offer permanent jobs to workers in temporary employment. NUMSA said in a statement that the employer had offered a 5% increase which was “not much at all” for the lowest paid worker who earned R7,000 a month.

In Gauteng, the workers marched in and out of the main gates of ArcelorMittal in Vanderbijlpark, chanting and disrupting traffic.

ArcelorMittal said in a statement the company believed its offer was fair considering current economic conditions and the future sustainability of the business. Spokesperson Thami Didiza said the company had won an interim interdict in the Labour Court against a strike by employees at the blast furnaces, coke batteries and steel-making in Vanderbijlpark and Newcastle. “Should these employees continue with the strike, it will be considered unlawful,” Didiza said.

NUMSA spokesperson Phakamile Hlubi-Majola said those workers were expected to return to work on Thursday pending a final court judgment on the strike. She condemned ArcelorMittal for going to court to stop the strike. “They waited until the last hour, so that they could strike fear against the workers,” she said. The union said in a statement that ArcelorMittal had made the application for the interdict because another application - that its business be declared an “essential service” is pending at the Commission for Conciliation, Mediation and Arbitration. Essential services workers have more limited rights to strike.

The union said the Labour Court interdict affected only workers in blast furnaces, coke batteries and the steel plant. All other workers could still take part in the strike.

Lucky Serutla, a general worker at ArcelorMittal in Vanderbijlpark, complained about working conditions. “The company doesn’t want to meet our demands. Some workers have been retrenched and fired, and they don’t employ any additional workers. You find two of us as employees, having to share the workload of about six or seven people. Yet our salaries are not going up,” said Serutla.

Another employee, who did not want to be named, said he supported seven people in his family. ”We cannot afford the standard of living on the same salary as two years ago. Food and petrol are going up frequently. We need the increase,” he said.