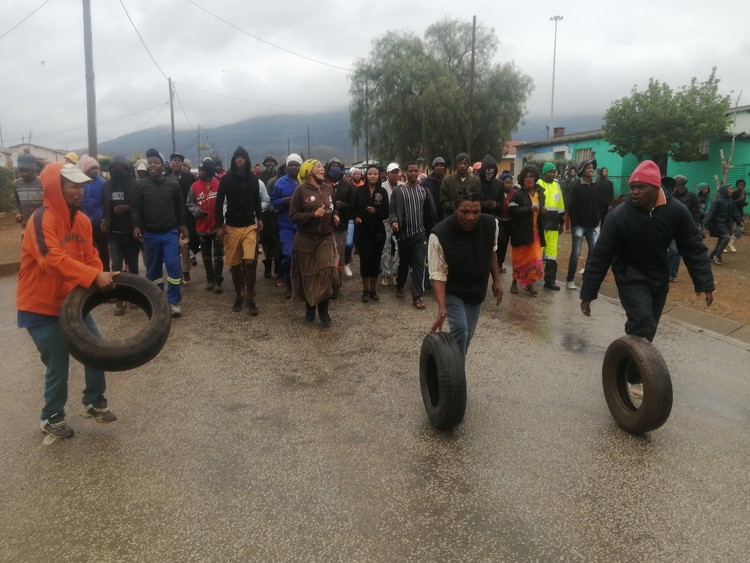 Cookhouse residents blocked the R63 with burning tyres and large stones on Friday. They believe people from their community are being sideined for the Somerset East Multi Purpose Industrial Park construction project. Photo: Mkhuseli Sizani

About 400 Cookhouse residents blocked the R63 with burning tyres and large stones on Friday, demanding they be employed at the R28 million Somerset East Multi Purpose Industrial Park construction project.

During the protest, the group turned away several taxis that transport workers to the Cookhouse wind farms. Thereafter, protesters moved to Madiba Hall where they agreed to go to Cookhouse Creamery and Fresh Stop filling station. There they ordered the owners to fire all of their workers from Somerset East and replace them with Cookhouse residents. The workers included petrol attendants, cashiers, security guards and cheese makers.

The protesters say they were angered on Thursday afternoon when the position for Community Liaison Officer for the project was readvertised. It is alleged that out of ten candidates interviewed on 29 September, only one was from Cookhouse. The ward councillor has dismissed this allegation.

Cookhouse community leader Bhongolwethu Mema said: “The project is for the entire Blue Crane Local Route Municipality but Somerset East residents are excluding us. Our councillors and mayor are folding their arms and are doing nothing about this problem.”

Ward 3 councillor Thobile Xakaxa in Somerset East said: “This problem started after rumours were spread that the scores for the interviews were leaked and the highest scorer was from Cookhouse. The Somerset East community then protested and demanded all the jobs.

“But Cacadu Development Agency which is the implementing agent on Monday said that the appointment processes were not properly followed. It then ordered … the position to be readvertised,” he said.

“The Somerset East residents are refusing to allow Cookhouse residents to be part of this project. They too claim not to be benefitting from projects. They also protested on [Friday morning] at the municipal offices in Somerset East,” he said.

Xakaxa said a meeting with both communities will be held on Monday to resolve the problem amicably. “There is no way we can allow communities to fight,” he said.

Next:  20 shacks ignited in five minutes in experiment