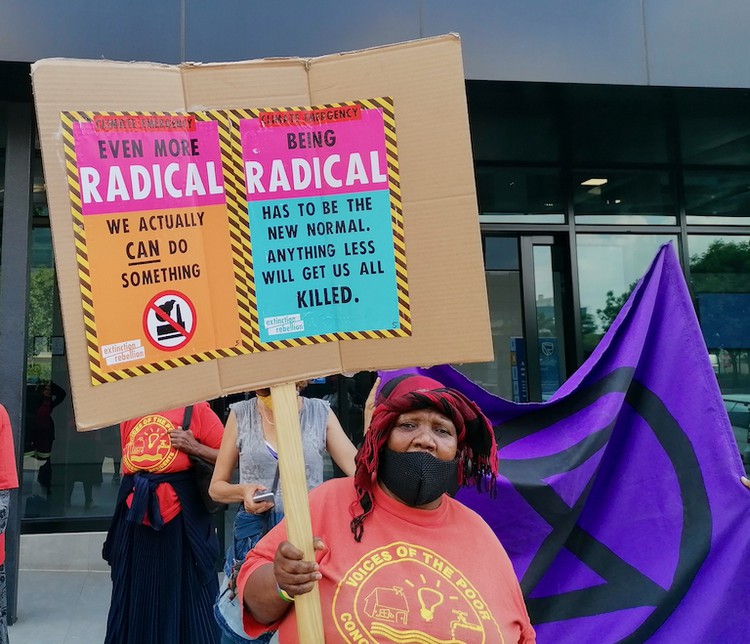 On Friday morning, about 20 demonstrators picketed outside Standard Bank’s offices in Rosebank, Johannesburg, to demand that the bank not finance a crude oil pipeline through Uganda and Tanzania.

If built, it would be the longest heated crude oil pipeline in the world and it would negatively impact communities, rivers and forests along the pipeline, protest organisers Extinction Rebellion SA (XRSA) said in a statement on 6 October.

They held signs which read: “Rapid transition to renewable energies” and “Act now or there will be hell and high-water”.

They are demanding Standard Bank disclose all past investments in fossil fuels and to stop any further fossil fuel investments. They accuse the bank of contradicting its open endorsement of the Paris Climate Agreement.

“When we know that it is under-served communities that will suffer the hardest impacts from climate catastrophes, Standard Bank must now be pushed to endorse social and environmental justice as a fundamental part of its investment strategies,” read the XRSA statement.

Speaking at the picket, organiser Malik Dasoo said, “We want to send a message that Africa is not a dumping ground. It is not a place where you can just come, seek as much profits as you want and leave.”

Chairperson of VPCR Eunice Manzini said Standard Bank must listen to poor people. “We are going to die, but they [rich people] will not because they know where they will go. We don’t have any place to go,” said Manzini.

Next:  Neighbouring communities fight for jobs at construction project