Mystery: Why did a youth movement get lottery funding to build an old age home that doesn’t appear to be needed? 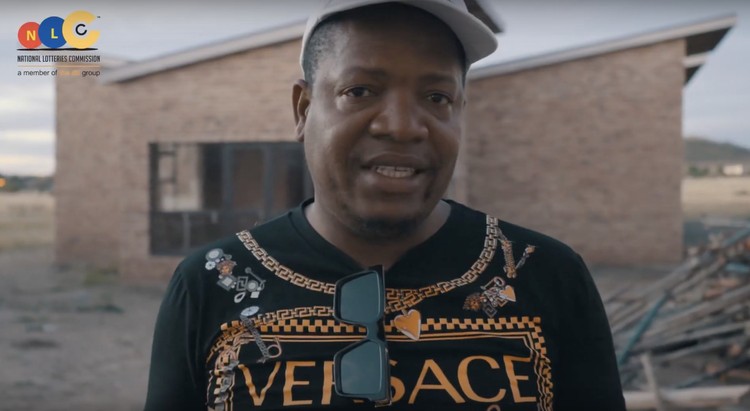 SAYM executive director Alfred Sigudhla in front of the old age home, then under construction, in a screenshot from a November 2020 video posted on the NLC’s YouTube page. (Fair use)

A Lottery-funded old age home in the Free State is yet to open its doors, despite receiving over R27.5-million in grants over the past five years.

The Free State Department of Social Development (FSDSD), says it was not consulted beforehand about the plan to build the home by the Southern African Youth Movement (SAYM), which received the multimillion-rand funding, including the initial location of the home in Botshabelo, or when it was moved to Thaba Nchu after protests in which the partially-built facility was vandalised.

When the department “was eventually consulted” in 2022, it had “advised that the old age home be repurposed to a substance abuse halfway house”, according to Lindiwe Mnguni, the FSDSD’s acting head of communications and marketing.

The funding for the old age home was part of several grants totalling over R67.5-million doled out to SAYM-related entities by the National Lotteries Commission (NLC) since 2016. The grants are all recorded in NLC annual reports under several slightly different variations of the organisation’s name.

SAYM also received almost R27-million from the NLC to build a drug rehabilitation centre in Mbombela in Mpumalanga, which is still not completed or operational, and R15-million to produce and stage a drug awareness musical, which only ran for a handful of performances.

Construction of the old age home initially began on a site in Botshabelo, about 66km from Bloemfontein. But when angry community members “vandalised and ransacked” the partially-built home, it was relocated to a new site in nearby Thaba Nchu, according to SAYM.

Explaining the normal procedure that should have been followed, Mnguni said: “Like any other facility to be constructed, proper infrastructure procedures must be followed like land identification, zoning of the land, etc. At all times the norms and standards guiding construction of the old age home must also be complied with.”

The FSDSD finally did a site inspection at the home on 25 May 2022, according to Mnguni. This was almost five years after the first R20-million grant was paid to SAYM in May 2017 for the old age home.

But, responding to questions from GroundUp, SAYM’s board chair, Dr Lekgotla Mafisa claimed his organisation had “consulted broadly with various stakeholders, including DSD, before the facility’s construction commenced.”

“As a result, the Tribal Authority, in consultation with the local municipality, issued a letter allocating the land,” Mafisa said. He did not mention in his responses to GroundUp that the FSDSD had advised that the home be turned into a substance abuse halfway house, as there was already an DSD old age home in Thaba Nchu.

Mnguni said the FSDSD was now working with SAYM “to provide guidance and support regarding the re-purposing of the old age home” and had issued a “conditional registration” for the halfway house, not the old age home the NLC had originally funded, in October last year “to enable SAYM to fasttrack the plan for re-purposing.”

Mafisa told GroundUp that SAYM had received an “interim licence” to operate from DSD, which would be given to them at a “handover ceremony”. Mnguni said the department was not aware of any handover ceremony.

“Full registration could only be issued once the facility met the set norms and standards,” she said.

The SAYM’s old age home and drug rehab centre were both part of an allocation of over R250-million in proactive funding from the NLC for six homes and four rehabs around South Africa in the 2016/2017 financial year.

Proactive funding, which has been at the heart of the looting of the lottery, allows the NLC to identify and fund projects without first requiring an application for funding.

None of the old age homes and drug rehabs are yet operational and most are incomplete. Last year, the NLC allocated almost R65-million to finish several multi-million rand infrastructure projects that were left incomplete after millions in Lottery grants went missing. This includes several of the unfinished old age homes and rehabs, but the SAYM projects are not included.

Mafisa says the home has been completed and that interviews for staff were conducted late last year. Mafisa also undertook to supply GroundUp with copies of the adverts placed for staff for the home, but never did.

On who would staff and run the new halfway house facility, Mnguni said: “The facility belongs to SAYM. The department will plan a supporting role as per request tabled for its consideration.”

While Mafisa claims that community consultation preceded construction at the Botshabelo site, a community uprising forced them to find a new site in Thaba Nchu.

“The debate was about land allocation for urban development by the tribal authority,” the SAYM’s Mafisa said.

“The community members wanted their chief to also allocate stands alongside the project, which the municipality refused and forcefully removed those illegally erecting shacks. During the community protests, the project was devastatingly vandalised and ransacked. Cases were opened against perpetrators. A decision was taken to relocate the project based on safety concerns,” Mafisa said.

“The project was delayed due to land disputes between communities … and had to be relocated to another site which needed new plans and all required research work and architectural plans had to be developed,” according to a May 2020 news report.

In June 2021, just over a year later, a local Free State news website, which interviewed SAYM executive director Alfred Sigudhla about the home, reported that the facility was “90% complete with finishing touches being done.”

A video interview with Sigudhla, published on the NLC’s YouTube channel a few months earlier in November 2020, shows that the old age home was still very much under construction.

The video was one of several released by the NLC, produced to counter GroundUp’s reporting about corruption involving hundreds of millions of rands in grants for unfinished old age homes, drug rehabs and other multimillion-rand Lottery-funded infrastructure projects.

Despite receiving R27.5-million from the NLC, “SAYM has invested millions in completing the project,” Mafisa said.

And in response to follow-up questions, he said that after the project was relocated, “the original funding didn’t cover other things required by the licence conditions, like waste building, fire and landscaping, including perimeter walls.”

“The final report with all its financial implications has been submitted to NLC, and once finalised, it will be shared with the public accordingly. It is worth mentioning that SAYM has invested millions in completing the project,” Mafisa said.

The NLC, in response to questions about SAYM’s various Lottery-funded projects, said, “We confirm that the South African Youth Movement has received funding from the NLC.

“We are unfortunately unable to refer to any documentation or verify information regarding the inquiry as all proactive funding files have been seized by the Special Investigating Unit as part of their ongoing investigation.”

Next:  City withdraws workers after crew robbed yet again in Philippi