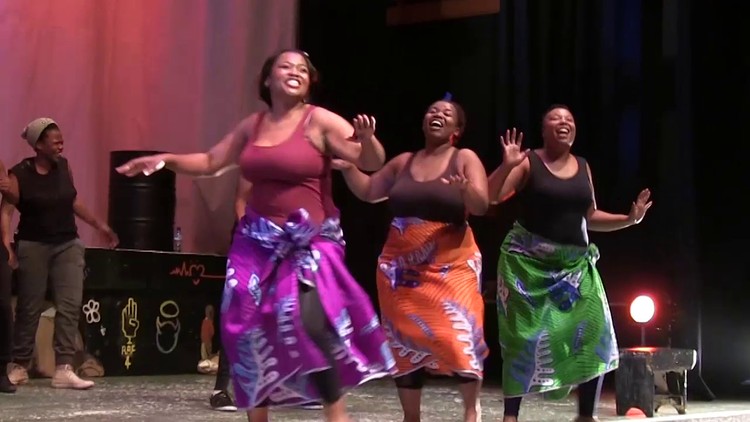 Opening night of the musical Taking Back the Future in Mahikeng on 20 June 2017. Photo supplied by Southern African Youth Movement

For a show funded with a R15-million Lottery grant and boasting an all-star cast, there is remarkably little evidence that the musical, Taking Back the Future, undertook the three-province tour that was a key part of the grant.

The show was co-written and co-directed by Tsotsi star Presley Chweneyagae. His foundation, the Presley Chwenengayae Foundation, was included in all branding on all content related to the project.

Chwenenyagae enjoyed a close relationship with some members of the NLC’s former executive and board and regularly attended the organisation’s events. He did not respond to an email, sent to an address supplied to GroundUp by his wife, with questions about the musical and his involvement, as well as a request for photos and videos from the show.

The musical is one of three projects (the other two are a drug rehabilitation centre in Nelspruit in Mpumalanga and an old age home in Botshabelo in the Free State) for which the Southern African Youth Movement (SAYM) received funding of over R67.5-million from the Lottery, according to the NLC’s annual reports.

“Taking Back the Future is a project funded by National Lotteries Commission [NLC],” SAYM said on its website, in a post that is no longer on the site, but which we found using the Wayback Machine.

The stars of the show, which was co-written and co-directed by Chwenengayae and Tshepo Ratona, were actors Zenzo Ngqobe, Tshireletso Nkoane, Boitumelo “Chuck” Shisana, and Segomotso Modise.

The musical “explores the lives of young individuals living in a busy, yet lonely street of South Africa’s capital, Pretoria,” according to a review by the Mahikeng Mail after the show premiered at an arts studio in the town in June 2017.

Chweneyagae and Ratona told the paper: “We wanted to create a universal story in South Africa because of the scourge of [the drug] nyaope and to convey the message about its detrimental effects to our youth.”

“[It is] one of [the] creative initiatives conceptualised and implemented by Southern African Youth Movement and The Presley Chweneyagae Foundation,” the post says. “This is a dual artistic project, it constitutes both theatre and film elements. The production will tour three provinces, Free State, Mpumalanga and the North West Province.”

Facebook posts from the time of the premiere suggest that this three province tour was communicated publicly, but there’s silence about the tour after 25 June 2017.

The focus of the multimillion-rand project was supposedly to assist children living on the streets, and other vulnerable children.

“Its main focus is on youth development using different art disciplines and life skills to assist children living in the streets and vulnerable youth in general,” the pair told the newspaper.

But the only event we could find relating to street children was a poster advertising a Take Back the Future seminar in Pretoria in 2017, which was billed as “Using art to save children on the streets”.

The only review of the show we could find was the one published in June 2017 by the Mahikeng Mail, when the show premiered in the North West. It had a five-day run, from 20-24 June in the town’s Mmabana Studio 1 theatre, according to online adverts at the time. It was advertised to start at 7pm each night and there was possibly an extra show one day. The theatre can only seat 120 people. This means a maximum of 720 people would have seen it at that venue if all the shows were sold out.

Despite an extensive internet search, including the SAYM website and Facebook page, and the Presley Chweneyagae Foundation, which is branded on all marketing material for the show, including a vehicle funded by the NLC, our search failed to turn up any other reviews, photographs or videos from performances of the musical. We can find no evidence the show was taken to other provinces.

SAYM’s website does not have much content about the show, besides a gallery with a few posters, a photograph of the branded, Lottery-funded vehicle, and what appears to be a photograph of some of the cast. We could not find a single photograph on this site from any of the rehearsals or performances of the musical.

We also found a February 2017 “Call for proposals” for the musical, in which several positions for the show were advertised. One of the advertised positions was for “an expert on drug and substance abuse with a minimum of ten years experience with a degree in the relevant field”. We also found online adverts for auditions in Free State and Mbombela.

In response to a request for copies of photos and videos from performances of the show, as well as a copy of a documentary about Take Back the Future, SAYM sent us dozens of photos. They include pictures of the stars of the show, and some from auditions and rehearsals. The only photos of an actual performance are from the opening night in Mahikeng in June 2017.

The reason for not being able to supply documents relating to the 2017 project was that most had been destroyed, SAYM board chairperson Dr Lekgotla Mafisa said.

Mafisa wrote that it is “common knowledge” that the project took place “six years ago”, and that the minimum required period to store documents is five years. “From there the shredding process after so many years after the project was undertaken. However, we have all the pictures that cover all the three auditions and performances,” he said.

He wrote that the programme was covered by “main media, radio, television and print media across all the provinces”. He said that the reason we could not find it in the media “is due to the fact that the project took place six years ago”.

“Many organisations shred documents every five years as per sound document management standards, which we are sure you are familiar with,” he wrote.

Mafisa was also at pains to disassociate Chenengwae’s foundation from the musical: “The board of SAYM took note of the risk of association [and] at its own discretion advised the NLC that Chweneyagae Foundation would not participate as an interested party in the project.

“We hope that you are not going to use Mr Chweneyagae maliciously to sensationalise his participation in the project, of which he is not a beneficiary,” Mafisa said. “The SAYM is a beneficiary and not the Chweneyagae Foundation. Mr Presley Chweneyagae was not paid in his personal capacity.”

Chwenegae’s foundation is also billed as a partner organisation and has branding on posters relating to the show. It also has branding on a Taking Back the Future vehicle.

SAYM executive director Alfred Sigudhla is also an active director of Chwenegayae’s foundation, a position he took in January 2012, according to company records.

In answer to further follow-up questions Mafisa said, “SAYM and the Chweneyagae Foundation have core branding rights on mutual projects of interest. That’s the reason why the foundation was classified as a related party and was removed in the implementation of the project.”

“Mr Chweneyagae is a Brand Ambassador of SAYM in his capacity as the patron of his foundation,” he said.

Mafisa said SAYM was also unable to supply contracts relating to the project, as “contractual relationships between parties in the first place are not for public consumption, guided by the various pieces of legislation that protects such information such as POPI Act.”

The NLC said it was unable to supply photos or videos as all files relating to what are known as “proactively-funded” projects, such as this one, had been seized by the Special Investigating Unit.

This article was updated to include the correct spelling of Tsotsi in the headline.