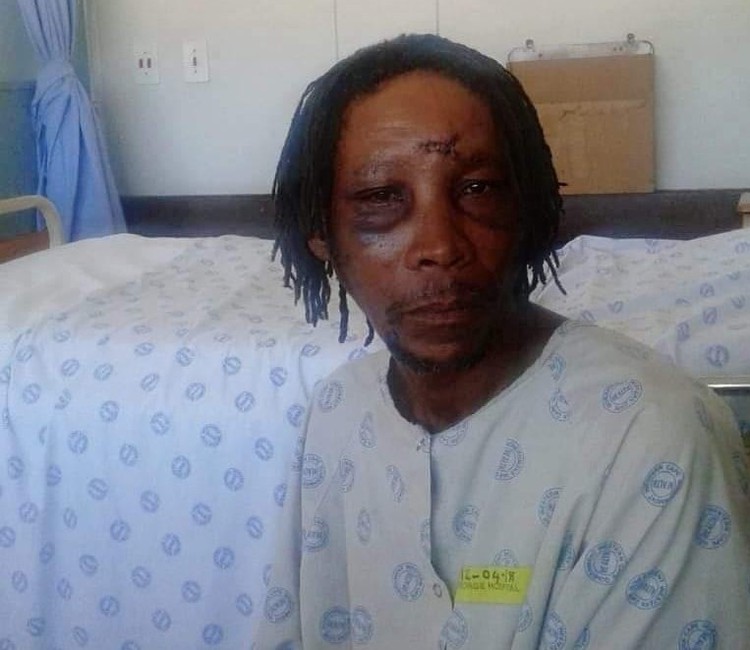 Two Murraysburg farmers are to appear in the court this month for assault with intent to do grievous bodily harm. They are accused of assaulting Anthony Koopman who was passing their farm looking for work. Photo supplied

Two farmers are to appear in the Murraysburg Magistrate’s Court this month for assault with intent to do grievous bodily harm. They are accused of assaulting a man who was passing their farm on his bicycle on the evening of 9 February.

Anthony Koopman from Murraysburg said the attack left him with severe head injuries and epileptic seizures.

Captain Malcolm Pojie, Southern Cape SAPS spokesperson, confirmed that an attempted murder case was initially investigated by Murraysburg detectives. “Investigation into this matter revealed that 42-year-old [Koopman] was travelling on his bicycle when he was accosted by two men. He sustained serious injuries and was taken to a hospital in George for medical attention,” Pojie said. He said the incident took place on the R63, close to Murraysburg.

“Further investigation led to the arrest of the two accused aged 71 and 37. They were later charged for assault with the intent to commit grievous bodily harm …The time of the alleged incident was about 9pm,” he said.

According to Koopman, he was out looking for work when he passed a farm in the Bloupoort area near Murraysburg. He said a man shouted for him to stop which he did. “He came to me and hit me in the face with his gun.”

He said the man called his father who arrived in a car. “The farmer almost drove over me. He then threatened me with a pistol and shot blanks at me,” he said. Koopman said that he can’t remember much after this. “I didn’t wake up for a while.” Afterwards he was treated at George Hospital for a cracked skull and received stitches on his head.

The two men are Ludwig van Heerden and his father Karel van Heerden. They appeared in the Murraysburg Magistrates Court in September and pleaded not guilty. They are due back on 19 October.

Their attorney Arno Bouwer told GroundUp that it does not make sense that Koopman went looking for work so late in the evening. He said that one of the Van Heerden farmers had woken up and went outside when he heard his dogs barking. The farmer allegedly saw Koopman chasing some of his livestock.

Bouwer said one of the men admittedly pulled Koopman off his bike “after he tried to stop him and Anthony didn’t want to stop because he was a suspect”.

He said the farmers then phoned the police and ambulance service. Bouwer has blamed the police for not conducting a proper investigation at the scene.

Neville van Rooy, a community activist from Murraysburg, organised a demonstration outside the Murraysburg Magistrates Court on 17 September.

He said the case against the farmers was important for the community because there have been two similar attacks in the past. “Even while [these incidents] have been reported to police, it hasn’t yielded the results that the community wants,” he said.

Van Rooy said he was recently involved in a case where a farmer just shot a man in the foot. This was just one of the many complaints by farmworkers that he had dealt with while working for an organisation called Support Centre for Land Change.

Chriszanne Janse van Vuuren, also of the Support Centre for Land Change, said Koopman has lost all prospects of employment due to his injuries, which is why he will pursue a civil case against the farmers.

Koopman was called to testify in the case on 14 September without being given time to adequately prepare. He was only notified of his appearance on 11 September, said Janse van Vuuren.

She said that the organisation was struggling to find out why Koopman was “cross-examined” by the court without representation. She said the cross-examination left Koopman feeling more anxious.

Koopman explained that due to his head injuries, he now suffers from epileptic fits. He said that his head injuries also cause him dizziness which often prevents him from being able to sleep. Koopman wants to pursue a civil case against the two farmers.

Janse van Vuuren said they will refer the matter to the South African Human Rights Commission.

The Van Heerdens are due back in court on 19 October.

Next:  Gay couple’s struggle to marry in Richards Bay