Murder charges dropped against activists after six months in prison

Abahlali BaseMjondolo says police and politicians are trying to silence them 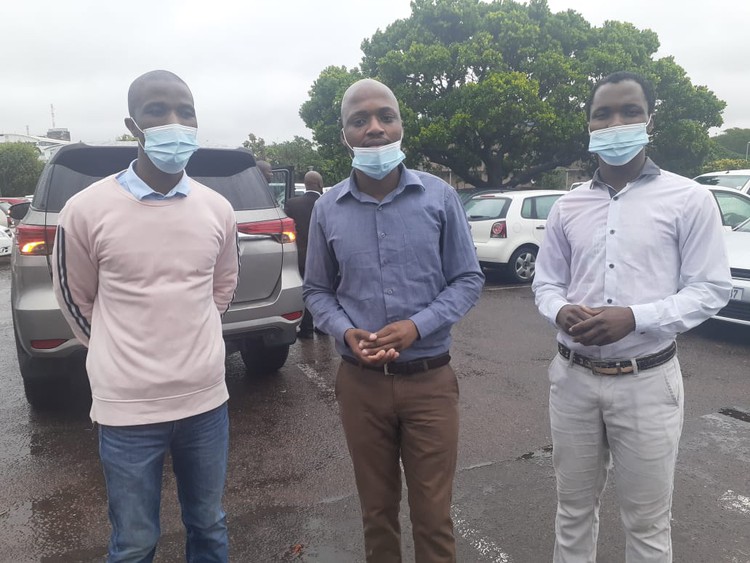 [From left] Lindokuhle Mnguni, Ayanda Ngila and Lando Tshazi after charges against them were withdrawn in the Durban Magistrates Court on Wednesday. Photo: Nokulunga Majola

The state has withdrawn charges against three Abahlali BaseMjondolo activists who spent about six months in custody at the Westville Prison for the murder of Vusi Shandu.

Shandu was a former eKhenana informal settlement resident who was shot dead in Cato Manor in March. The trio, Ayanda Ngila, Lindokuhle Mnguni and Lando Tshazi are community leaders in eKhenana.

Outside court, about 50 Abahlali members and supporters waited in the cold and rain and erupted in celebration when the three men walked out the court building.

In a statement, Abahlali BaseMjondolo said the trio’s arrest was an attempt by police and politicians to intimidate them and silence their fight for housing in eKhenana. Abahlali said costs of fighting court cases involving its members had bankrupted the shack dweller movement.

Meanwhile, the case against Abahlali’s deputy president Mqapheli Bonono, the secretary of its branch in eKhenana, Maphiwe Gasela, and Siniko Miya is expected to continue at the Magistrates Court in Durban on Friday. They face charges of intimidation and conspiracy to murder a witness in Shandu’s murder case.

Abahlali spokesperson Thapelo Mohapi said urgent reform of the criminal justice system was needed to stop it from being misused to repress activists. “The movement is under attack. We are calling for solidarity and saying hands off our activists, hands off Abahlali,” said Mohapi.

The National Prosecuting Authority had not responded to GroundUp’s questions by the time of publication.