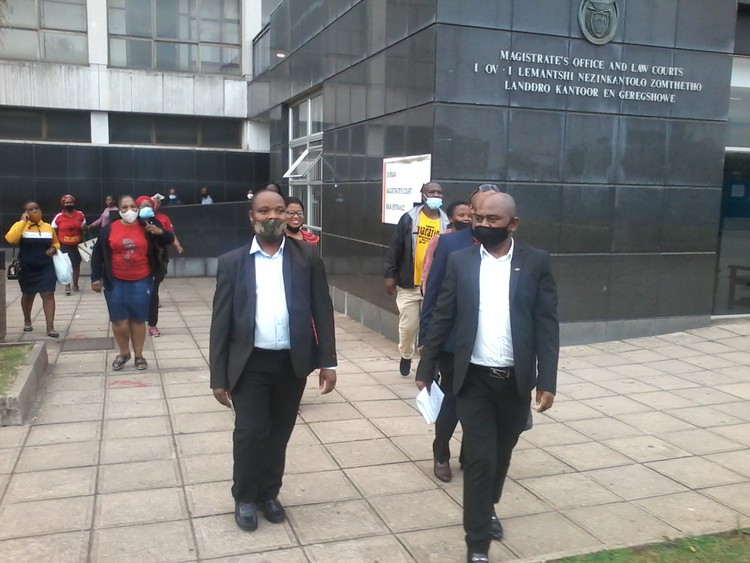 Abahlali BaseMjondolo president S’bu Zikode with deputy president Mqapheli Bonono leaving the Durban Magistrates’ Court after Bonono and Maphiwe Gasela were released on bail on Thursday. Abahlali’s leaders are claiming they were arrested as a way to discredit the leaders and the shack dweller movement. Photo: Nokulunga Majola

Two of the three leaders of the shack dwellers movement, Abahlali BaseMjondolo, who face charges of intimidation and conspiracy to commit murder have been released on bail.

Members and supporters of Abahlali BaseMjondolo celebrated their release on Thursday because they believe that the recent arrests of the leaders are targeted attempts to discredit the movement.

The movement’s deputy president Mqapheli George Bonono and secretary of its branch in eKhenana, Maphiwe Gasela, were granted bail of R2,000 each by the Magistrates’ Court in Durban on Thursday.

Bonono and Miya were arrested on 4 May while Gasela was arrested on 12 May. The state alleges that Bonono called an open meeting at Daikonia Churches on 21 March, where he and his co- accused conspired to kill a witness in the murder case of Vusi Shandu in which three other Abahlali BaseMjondolo activists are implicated. Shandu, aged 45, was a former eKhenana resident who was shot to death in Cato Manor in March.

Bonono and Gasela’s bail conditions include that they cannot enter eKhenana informal settlement or be in contact with any one from the settlement, especially the witnesses who were present at a meeting held on 21 March where the state alleges that the accused conspired to kill witnesses in another case.

Magistrate Xolile Manjezi denied bail for their co-accused, Siniko Miya, due to a previous case that apparently dates back to before he got involved in the movement. Miya, 29, will remain in custody until a hearing on 16 July.

During the court proceedings, hundreds of Abahlali BaseMjondolo members sang and danced outside. After his release, a tearful Bonono thanked those supporting them. 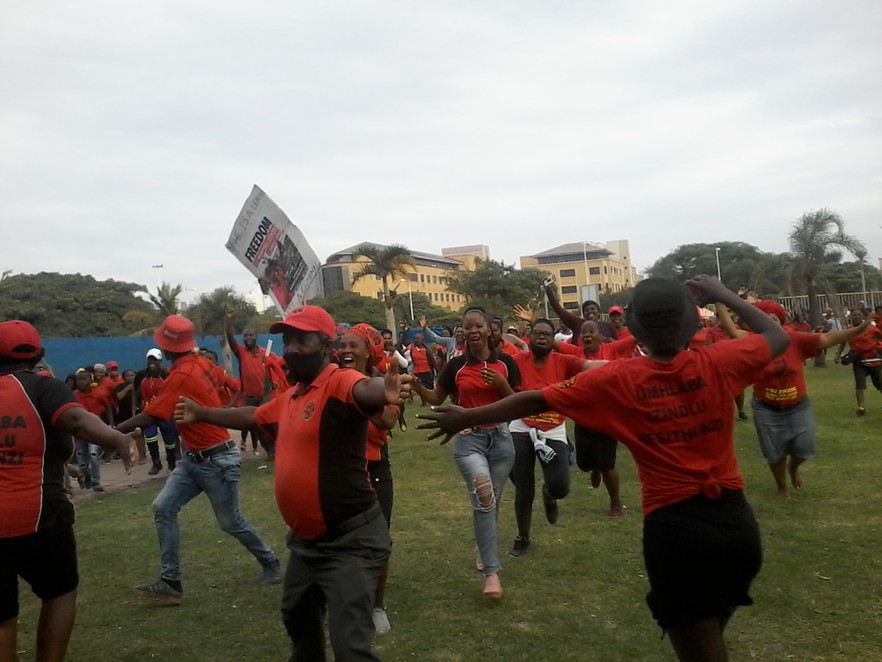 Hundreds of Abahlali members celebrate outside the Magistrates Court in Durban over the release of their two leaders on Thursday. Photo: Nokulunga Majola

Meanwhile, residents of eKhenana accuse the Cato Manor police of being biased and not conducting a thorough investigation into the cases.

“The police are just grasping at straws because there is no evidence to support their claim. Simiko [Miya] was not even at the meeting where it is claimed he conspired with Bonono and Gasela to have the witness killed,” said a resident who asked not to be named.

Abahlali BaseMjondolo founder S’Bu Zikode believes that the arrests are “a political plot to destroy the movement by exhausting our time, energy and resources, and divert our focus which is mainly land, housing and dignity”.

Zikode claims that these are targeted arrests, meant to discredit the Abahlali BaseMjondolo after it won the Swedish government’s Per Anger award in April.

“They are trying to rubbish us and make us like we are beneath the law,” he said.

With the local government elections scheduled for 27 October, he said the movement and its leaders are viewed as “stumbling blocks” for politicians who “consider informal settlements as a bank of votes”.

Zikode said they will be looking into the court’s bail conditions and the state’s grounds for refusing Miya’s bail. To Bonono and Gasela, he said, “You comrades have been brave and excellent. Thank you for your selfless support.”