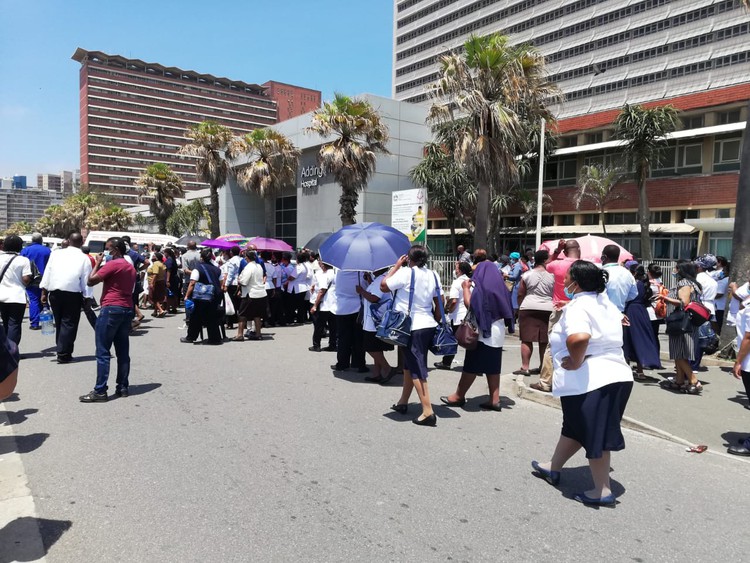 Staff at Addington Hospital in Durban gather in the parking lot during the go-slow protest they staged on Wednesday over faulty lifts in the facility. Photo: Nokulunga Majola

On Wednesday, staff gathered in the parking area embarking on go-slow protest at the facility to demand that the KwaZulu-Natal Department of Health fix eight lifts that have not been working for months. Only two of ten lifts in Addington are operational.

“Whenever I come to the [Addington] hospital, I have to carry my daughter on my back up the stairs to the sixth floor and it is not easy,” says Zamile Msomi from Lindelani resident, north of Durban.

Msomi brings her eight-year-old-daughter, who is disabled, to Addington Hospital for physiotherapy every month.

Msomi and her daughter, like dozens of other patients, were told to return on another day. “I do not have enough money to make a second trip back to the hospital. This is really disturbing for us as patients,” she said.

Another patient, Bhekithemba Nkwanyane, from Ntuzuma, said he arrived at the hospital at 7am to collect his medication. He had not yet been assisted by noon. “I don’t know what I am going to do if I don’t get assistance today because I have run out of medication,” he said.

“It is clear that the CEO of the hospital and the human resources manager have failed to address these issues. Not only are they not doing their work but they are victimising the shop stewards; people are being placed on leave without being paid,” Ndlovu said.

National Education Health and Allied Workers’ Union (NEHAWU) regional secretary Prince Mthalane said, “How are [staff] going to reach their work stations if the lifts are not working? We have workers who are also disabled, how are they supposed to get to their working station? These are the answers we want from the hospital management.”

The go-slow comes two days after the Democratic Alliance (DA) in KwaZulu-Natal (KZN) wrote to the South African Human Rights Commission (SAHRC) calling for an investigation into the situation at Addington Hospital.

In a statement, Dr Rishigen Viranna, MPL and DA KZN spokesperson on health, said they had received numerous reports from both staff and patients. “A week ago, staff and patients were stuck in the hospital’s only functional lift at the time, for several hours. Fortunately, they were rescued before the lift allegedly dropped to the ground floor,” said Viranna.

Union representatives met with the management late on Wednesday.

SAHRC Commissioner Chris Nissen confirmed that they had received a complaint about Addington Hospital and would be conducting a site visit soon. “It is indeed a violation of the patient’s human right and the staff too. How can they expect patients to use one lift and also climb the stairs to different floors?” he asked.

On Wednesday, Dr Sandile Tshabalala, head of the KwaZulu-Natal Department of Health, said in a statement that flooding caused the lifts to malfunction. “The Department has been engaging with the appointed service provider, who is working flat-out to source parts and ensure that the lifts are repaired timeously,” he said.

He confirmed that a working committee was formed to monitor the day-to-day functioning of the hospital and lift repairs; ensure communication between engineers, hospital management, and organised labour; and to keep all staff informed of the progress.

“Due to the specialised nature of the lift equipment, parts have to be ordered overseas, which may affect their timely shipping which is susceptible to logistical backlogs caused by the Covid-19 epidemic. The department also has a bigger project in the pipeline to replace the old lifts. This is expected to commence early in the new year,” he said.

Previous:  Green Scorpions order City of Cape Town to sort out pollution in the Milnerton Lagoon

Gqeberha refugee office is a nightmare for Somali immigrants