Mnangagwa’s critics and supporters face off in Cape Town

Opposing groups of Zimbabwean demonstrators confronted each other at the Cape Town Convention Centre on Wednesday where president Emmerson Dambudzo Mnangagwa was attending the World Economic Forum meeting.

Zimbabweans living in Cape Town who are members of opposition parties MDC and ZAPU, hostile to the president, were surprised when Mnangagwa’s supporters from ZANU PF emerged and settled on the same spot.

The two opposition parties have been mobilising for protests during the event that runs from 4 to 6 September. In a letter circulating on social media since last week, the opposition urged Zimbabweans to protest in large numbers. “Here is our time to show our braveness against this government. We need a government which looks after the people,” the letter read.

MDC representative Chief Pfekedza described the ZANU PF crowd as a “hired or rented audience.” He accused ZANU-PF of wasting money transporting the crowd while Zimbabwe is in shambles.

“These people are not living here,” said demonstrator Gift Mutseya.

ZAPU member Nkosikhona Ndlovu said protesters had been tortured and killed and activists abducted in Zimbabwe. “We need a liberated Zimbabwe. Government is corrupt, that is what is pushing millions of us out of the country. Now we have xenophobia attacking the same oppressed people.” 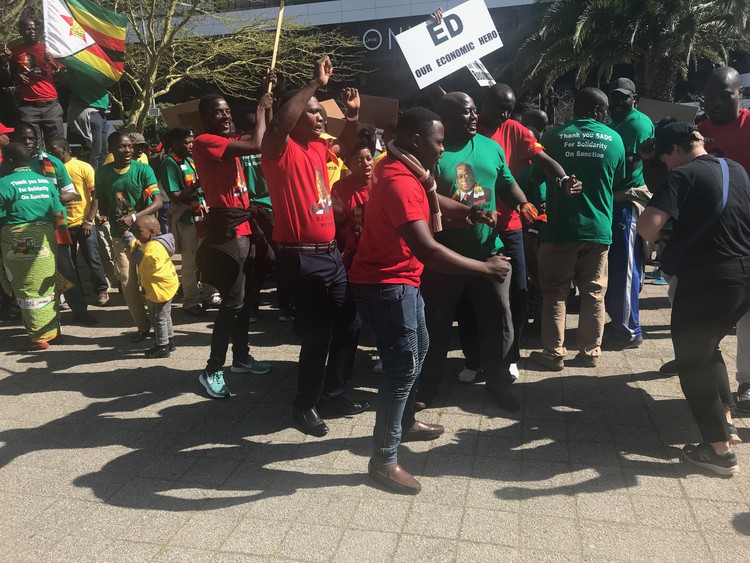 But Godfrey Tsenengamu, ZANU PF national commissar, said only ten leaders in the ZANU PF group had travelled from Zimbabwe. The rest were living in Cape Town.

Tsenengamu, said it was the opposition’s constitutional right to protest. “We believe in coexistence and multi party democracy. Dialogue is the way forward not confrontation.”

Tsenengamu said fixing the country was not an overnight matter but a process. The president had embarked on economic reforms such as fixing currency, attracting investors and fighting corruption.

He said about 17 people said to have been killed by the army during protests in August had been causing anarchy.

“They were looting, burning cars and stoning people. It is the duty of the government to maintain order,” Tsenengamu said.

Next:  I tipped off the police before the murder of Glebelands resident, says state witness