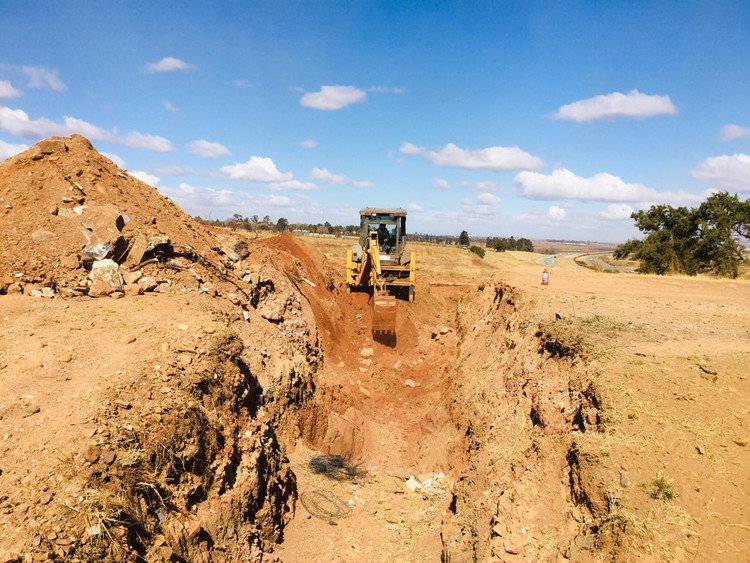 The Midvaal municipality has dug this trench to try to prevent a land occupation. Photo: Kimberly Mutandiro

“The ‘Big Six’ want to turn it into a race war which it is not. Some of the landowners who were affected by the land invasion were mostly blacks, coloureds and Indians,” says Beverly Gruar, a landowner in Elandsfontein, Midvaal, where a group of men calling themselves the Big Six have co-ordinated a land occupation.

The Big Six have framed the occupation in racial terms, telling GroundUp last week that the land has to be taken from “white people” and be given to “black people”.

A list compiled by landowners shows that at least seven plots on the land appear not to be owned by “whites”.

“I feel sorry for the poor and desperate people they took money from,” says Gruar. “It doesn’t make sense that criminals should want to invade land simply because they did not see anyone on the land. It takes time for some people to raise money to start their agricultural projects.”

On Saturday and Sunday, metro police, Dedeur SAPS, and members of the community policing forum stepped up patrols in the area to stop occupiers re-erecting shacks that had been demolished. The municipality also dug a deep trench to isolate the land from Vlakfontein township.

A large group of landowners, who mobilised themselves through social media, also arrived in the early hours of Saturday morning to support the Elandfontein landowners.

Landowners with shields and pellet guns formed a wall to stop the occupiers from crossing a bridge on the N1.

Over a dozen frustrated occupiers threw stones and shouted insults. Some threw stones at cars on the N1 and threatened to close the road. Metro police dispersed them.

Landowner Marius Harding said, “This is a housing problem which the government is failing to solve. We can say what happened to landowners here in Elandsfontein is another way of people trying to take matters into their own hands and expropriate land without compensation through mob justice. As long as the government fails to give people land, mobs will continue invading.”

“The past month has been terrible,” said Gruar. “My son received death threats. Our home was petrol bombed and we had to extinguish flames before they spread. Several times on my way to work some men and women would block the road to stop my car from passing. They threatened to drag me out of my car and chop me into pieces and burn me, all because they wanted to steal land that does not belong to them.”

Khensani Maluleka, one of those who paid the Big Six for land, said she was stopped from accessing her plot on Saturday by law enforcement. “The people in charge of the occupation showed us papers which prove that they won the piece of land on our behalf. The problem is that police keep disturbing us from putting up our shacks,” she said.

“They have told us that they will keep fighting for us to have the land, so taking back the money will not be necessary. l like this area because it very peaceful and quiet. All l want is a piece of land where my family can live peacefully,” she said.

Mokete Motsamai, Mayco Member for Development Planning and Human Settlement for Midvaal, told GroundUp last week, “This is no longer a land invasion but a criminal syndicate.”

MP Dennis Ryder, DA Regional Chair for the Vaal Region, said, “The Elandsfontein land invasions have been like no others that I have seen in my nine years in government, or in the ten years as an activist before that.”

“Land invaders have marched onto privately owned land, where landowners are still living, and threatened to kill the legal owners and burn their houses.”

“Landowners should not take the law into their own hands, or demand that the municipality assume SAPS’s functions.”

Next:  “Mfuleni residents are tired of seeing the City relocate residents from other townships”