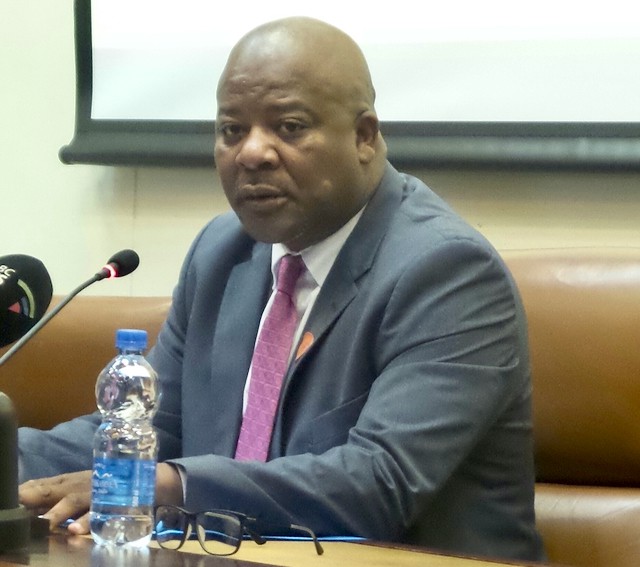 “Information presented to me by SAPS has indicated that there are foreigners involved in some of these invasions. My comments were not a blanket statement attributing all such invasions to foreigners,” Mayor Nqaba Bhanga told GroundUp. Photo: Joseph Chirume

Mayor of Nelson Mandela Bay Nqaba Bhanga has been accused of inciting xenophobia and placing immigrants’ lives at risk after making inflammatory comments at a special council meeting on 30 April.

Bhanga said a human settlements report showed that an estimated 30,000 households had “invaded” public and municipal land since 2018.

Bhanga told GroundUp, “Criminal and political elements have hijacked and encouraged land invasions across the Metro. The information presented to me by SAPS has indicated that there are foreigners involved in some of these invasions. My comments were not a blanket statement attributing all such invasions to foreigners.”

Police spokesperson Colonel Priscilla Naidu would not confirm whether police were investigating such cases. She referred us back to the mayor for comment.

The mayor’s spokesperson Morne Steyn referred GroundUp to Councillor Werner Senekal in the mayor’s office who did not respond to our emails asking for evidence for his comments about immigrants being behind land occupations.

A shack owner in Nomakanjani informal settlement in Kamvelihle, who did not want to be named, said, “How can I buy land from a foreigner when I know that this is municipal land? This settlement was established after years of fighting running battles with the police and the municipality as we demanded houses.”

Secretary General for the Community of African Nations in South Africa (CANISA) Abdulrafiu Olatunji said Bhanga should come forward with evidence so they can investigate.

“We need to know the foreigners selling land to locals so that we confront them in order to address the issue before it creates unrest in the community,” said Olatunji. “We need facts.”

Olatunji said the mayor’s comments “may trigger an attack on migrants”.

Chairman for the Zimbabwe Migrants Support Network Chris Mapingure said, “We are shocked to hear such utterances from him as we believe his office is there to unite people. This message can result in xenophobic attacks. We appeal to the mayor to revisit his speech.”

Next:  Robben Island Museum is ailing and yet R102 million of its infrastructure grant went unspent