Mayhem in Atlantis over building of community hall

Tear gas, rubber bullets and stun grenades were fired on Thursday at protesters from Witsand, near Atlantis, who built barricades using trees and burning tyres. A shop was also looted.

Over 500 people from the Witsand community gathered in groups to demand a community hall, clinic, a police station and schools. The protest was aimed at the City of Cape Town. 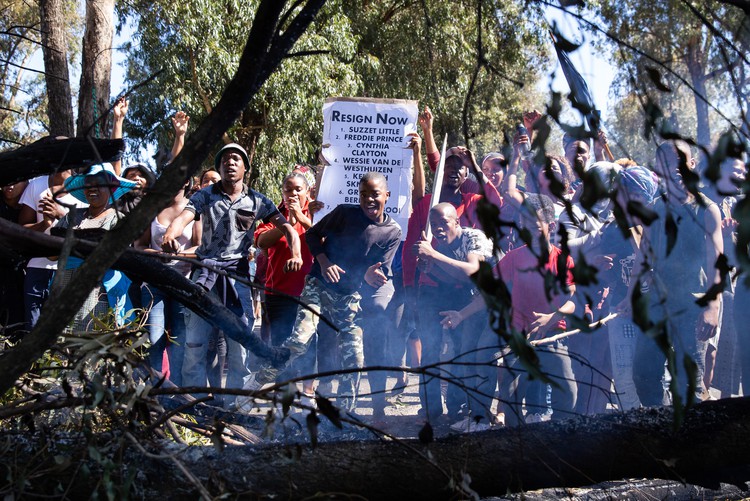 At least 500 protesters blocked a section of the R304 with branches, tree stumps and tyres.

Community leader and South African National Civic Organisation (SANCO) Member Lavapo Motshisi told GroundUp that the protest was a response to what the community sees as continued delay in the delivery of services and the construction of a community hall.

Motshisi said SANCO has been in contact with the City over the construction of the community hall, funded by an outside donor since June of last year. He said that there have been, what the community believes to be intentional, delays put in place in the contract. This includes sketches of the hall that need to be delivered to the sponsor to begin building. Motshisi said the community hall should be built because there “is no infrastructure, no clinic, no police station, no school” in Witsand, which neighbours Atlantis. 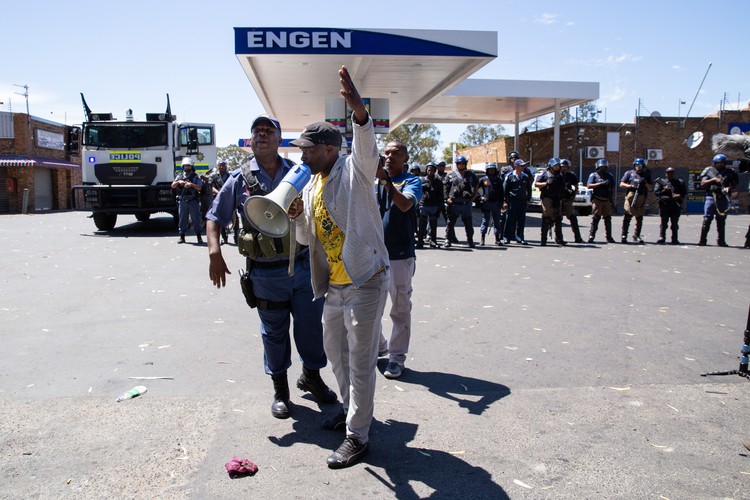 A community leader tries to calm the situation after police gave protesters five minutes to disperse.

Binky Masega, fellow community leader and SANCO member, told GroundUp that the council had provided the community with a sketch of the community hall, but they had deemed it “fake” based on the evaluation of another resident who works in construction. She said the community wants an approved and official sketch from the City to take to Mkhulu EDP.

The protest grew in intensity and many stones were thrown. Several police in riot gear dispersed large groups at the entrance of Witsand. They used rubber bullets and tear gas. 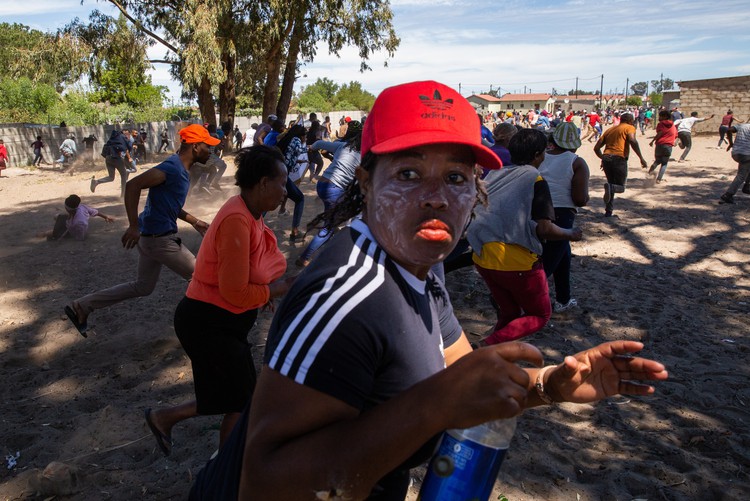 Protesters disperse after police fire stun grenades and rubber bullets at them. Protesters retaliated by throwing rocks and bottles. This woman has just been shot in the arm (see bottom of photo).

Shortly after the first dispersing, sub council manager for Area 1 in the Western Cape, Wessie van der Westhuizen, arrived on the scene to deliver to the residents a sketch of the community building and speak with residents. Van der Westhuizen said he was out of the office during the most recent negotiations between the community and the City. He confirmed to GroundUp that outside sponsor, Mkhulu EDP, approached the City to do two development projects, with one being located in Atlantis. This development project was meant to build the community hall.

Community members still wanted an “official sketch” and to hear from Councillor Suzette Little, whom SANCO had been in negotiations with. 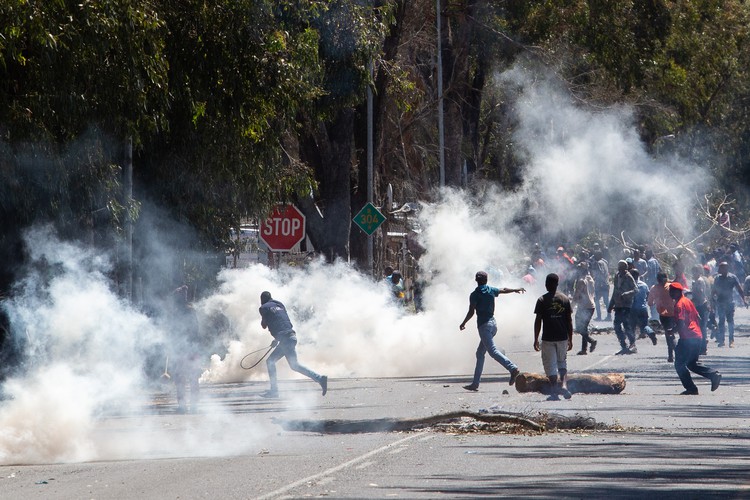 Police use tear gas to clear the streets.

While waiting for Councillor Little, the protest escalated with some stone throwing and well as toyi-toying.

More police arrived on the scene with a Nyala. They warned residents to disperse within five minutes. Following this warning, stun grenades were thrown, and the police began apprehending individuals, including those who looted a nearby store. GroundUp saw at least three people arrested. SAPS had not confirmed the total number of people arrested by the time of publication. 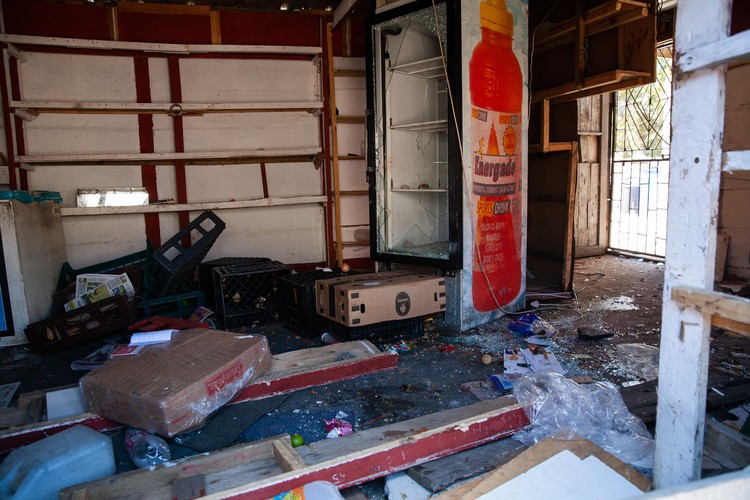 At least one store was looted.

One resident was shot at close range with a rubber bullet leaving a large gash in her right forearm. She said she was not “doing anything wrong” and that she was concerned about her two-year-old child and now also her ability to go to work. She received medical assistance.

Following this final dispersal, the police then began to clear the streets, cutting logs and clearing brush. They stayed in the area for the rest of the afternoon. 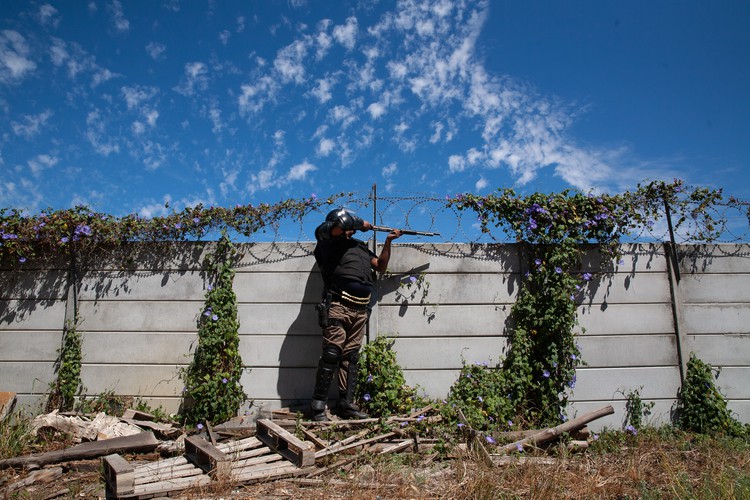 Police make their way through the township searching for protesters. 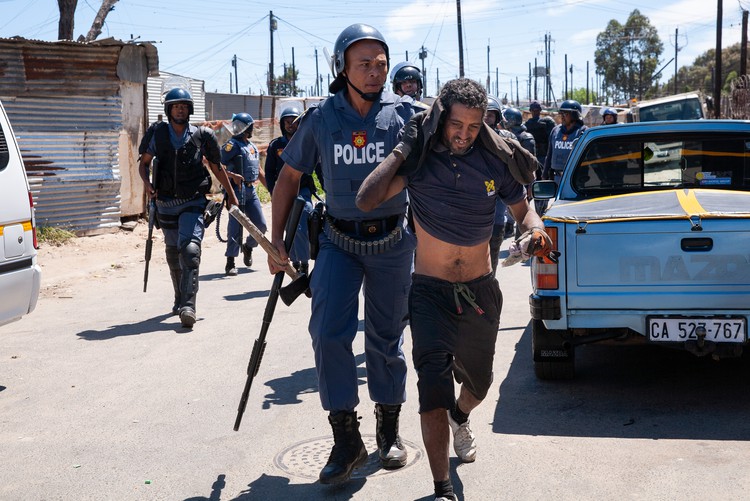 At least three protesters were apprehended. 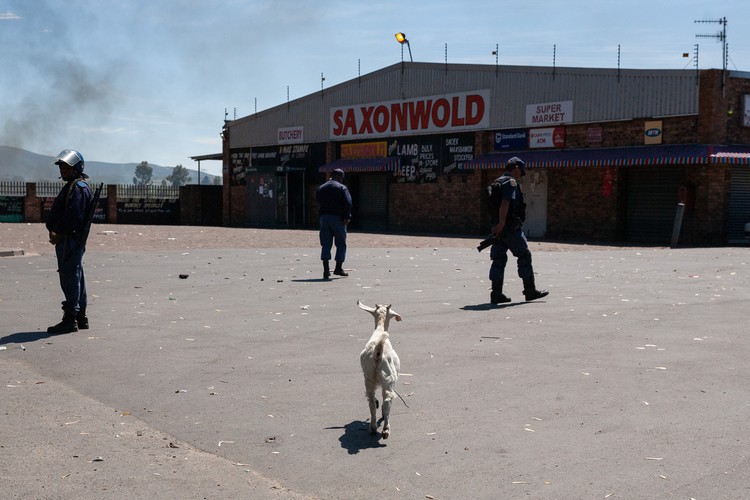 During a quiet break, a goat walks nonchalantly past the police.

Next:  Workers stand in solidarity with MyCiTi bus strikers