City says it has received over 60,000 requests for plastic sheeting from the area 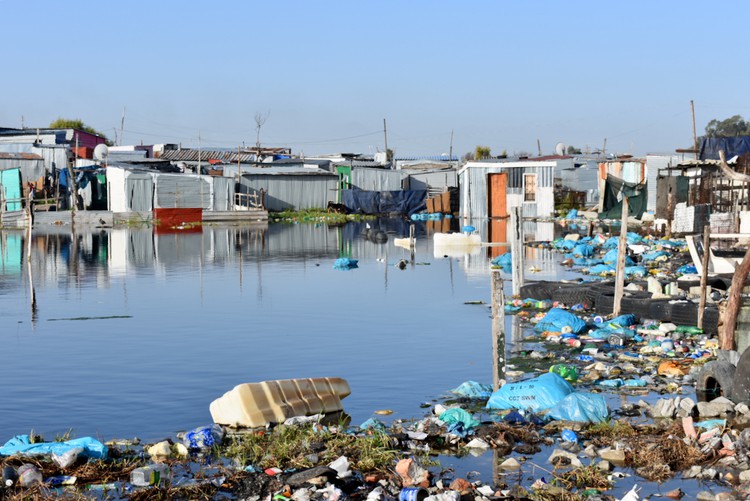 The rains have subsided for now but Marikana in Philippi remains flooded. Photo: Buziwe Nocuze

Residents of Marikana informal settlement in Philippi, Cape Town, which was flooded by the recent severe storm and is still underwater, say they have had no flood assistance from the City.

Residents wear gumboots to move around the flooded alleys.

“We have been contacting the City of Cape Town to assist us without luck. It is painful to see other informal settlements being assisted while we get nothing,” said Daluxolo Naki, a community leader.

Naki said people have been leaving Marikana for temporary shelter in drier areas.

“My kids can’t go out … We are asking the City to take our lives seriously. We cannot carry on like this. We need help,” said a resident who didn’t want to be named.

Nomsa Gobhoza said, “We believe we have every right just like any other informal settlement to get assistance … We were not asking the City to build us houses but provide plastic [sheets] and sand to protect our homes from flooding.”

Residents also want City trucks to pump out the water.

Mayco Member for Human Settlements Malusi Booi said in the past two weeks the City had received almost 60,000 requests for plastic sheeting in the Philippi area alone.

“This is aside from other areas where we have provided flood kits where there is also a great need,” said Booi.

He said officials had been working tirelessly since the rainy season started.

He said Marikana was on low-lying, flood-prone land that was not suitable for human habitation or housing. He said land invasions on unsuitable land such as Marikana “causes great misery”.

Next:  Two years after landmark silicosis settlement, no one has been paid