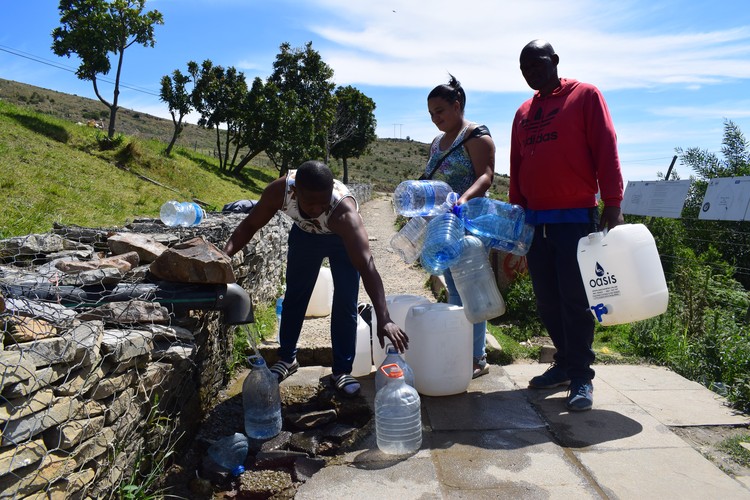 Makhanda residents TJ Mphelo, Carme Fantelas and Gary Sam fill their containers at one of the local springs before a two day water cut set to start on Friday. Fantelas says she comes to the spring twice a week to fill up drinking water for a local safe house in Makhanda. She says they cannot afford to buy drinking water. Fantelas says her husband sometimes visits the spring at 3am to avoid long queues. Photos: Lucas Nowicki

People in Makhanda in the Eastern Cape have been warned to brace themselves for more water cuts. The town has been experiencing a water crisis for years.

In 2021 and most of 2022, as a result of severe drought and the mismanagement of ageing water supply infrastructure by the Makana Municipality the town had water every second day.

Makana Municipality said water would be tankered to “more distressed” areas until the issue was resolved.

Rainfall in early 2022 filled up some of the dams, resulting in a few months without water shedding. But this was short-lived as the town has had a significant rise in water cuts during September, with many communities only getting water every second or third day.

Nomawethu Ralo from Joza township has three children. She has recently been employed by the Social Employment Fund to “revitalise” the town until March 2023, along with nearly 2,000 other young people from across Makhanda.

Ralo told GroundUp that she has not had water for over a week. She said last week she asked her ward councillor to request a water truck, which he had promised to do, but nothing has happened. “I can’t do my children’s laundry or clean the house. The toilet is smelly,” she said. Ralo said she pays R1 per litre for drinking water.

Makana Municipality has said that the recent water cuts are due to a leak at a pumping station. The lack of repair material combined with load-shedding made it difficult to repair the leak, according to the Municipality. Then on 26 September, another leak was found when the pressure did not pick up. Without the “necessary fittings” to fix it immediately, the town had to rely on James Kleynhans Treatment Works.

Meanwhile, much-needed upgrades at the James Kleynhans Water Treatment Works have been delayed yet again.

The contractor, Mamlambo Construction, went into liquidation in June 2022. The municipality had initially expected the upgrades to be completed in 2017, but this has since been pushed back to June 2023, according to Nosisa Sogayise, spokesperson for Amatola Water, the implementing agent for the project. 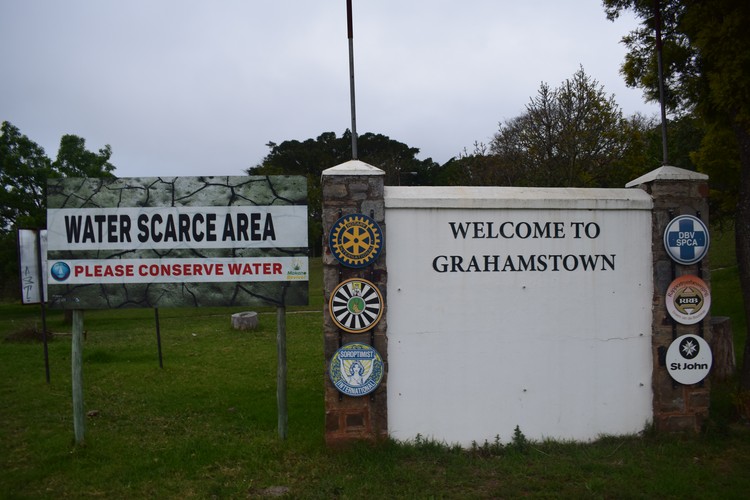 People in Makhanda in the Eastern Cape have been warned to brace themselves for more consecutive days without water.

When phase 2 of the upgrade is done, it will increase the pumping capacity of the James Kleynhans Treatment Works from around 10 megalitres per day to 20 megalitres. Makhanda’s daily demand is currently around 20 megalitres, according to the City’s water crisis page.

The water treatment works receives water from the Orange-Fish River scheme. Once the upgrade is completed, it could effectively end Makana’s water crisis.

Sogayise said Amatola Water had decided to terminate Mamlambo’s contract in June, due to “poor performance”. During this process, it also found out the company was in liquidation and faced serious financial challenges.

Sogayise said that phase two of the upgrade was 82% complete when it was abandoned. By then R164-million of the budgeted R414-million had been spent.

Amatola Water is expected to advertise the tender to complete the upgrade on 6 October, said Sogayise.

Meanwhile, the parliamentary Portfolio Committee on Cooperative Governance and Traditional Affairs (COGTA) in a statement on 18 September said it had requested a meeting to “get a better understanding of delays at the James Kleynhans Water Treatment Works that could have alleviated the water challenge in the Makana Local Municipality”.

Committee members inspected the treatment works and were told that the initial cost of R50-million for the upgrade had ballooned to R237-million. But Sogayise told GroundUp that the new projected total was R414-million, to be funded through a Regional Bulk Infrastructure Grant (RBIG).

The Makana Residents Association (MRA) released a report last year which detailed the multiple failures and costs of these upgrades.

Tim Bull, MRA secretary, told GroundUp that the recent project delays were “just the latest setback after years of broken promises since the initial deadline in 2017 wasn’t achieved. Each time this happens it adds to the bill, so that the total cost has soared since the initial estimate.”

Next:  Khayelitsha lesbian murder trial set to start next week, after tenth postponement