#UniteBehind and other train commuters stage picket on Friday

“When I entered the train, I saw a woman being raped in the corner” said a 15-year-old train commuter Likho Mendisi. This was just one of several dangerous encounters he has had on his daily train commute from his home in Khayelitsha to school in Lansdowne.

Mendisi was among 80 picketers at the Cape Town central train station on Friday afternoon to demand that the trains be fixed and made safer for commuters. The picket was part of #UniteBehind’s ongoing #FixOurTrains campaign.

Mendisi, like thousands of commuters across the city, relies on the Metrorail train service as the cheapest mode of public transport. But the service is riddled with problems and often poses serious safety risks for commuters.

Every day, Mendisi gets to the station in Khayelitsha at 5:30am but often only arrives at school at 10am. “It’s agitating because you wait for the train for a long time and sometimes it doesn’t even come,” he said.

He has been robbed and he has seen a person being pushed from a moving carriage. As a result, the grade 10 learner attends sessions with his school psychologist.

“Everything that’s happening in trains … is a disaster,” said Zukiswa Vuka of #UniteBehind. She said women were constantly being sexually harassed and violated while using trains. Vuka said they wanted Metrorail service to be declared a “national disaster”.

In April, a 16-year-old learner was killed trying to jump from one train to another. According to the 2017/18 Railway Safety Regulator report 343 people have died after being struck by trains. The report states that there have been more than 4,478 “safety operational occurrences” recorded. Although a statement by #UniteBehind suggests that this number is most likely much higher because there is no working process for commuters to report criminal incidents like sexual harassment.

On August 8, Transport Minister Fikile Mbalula in a statement launched a “war room” which he says is designed “to make rapid decisions based on the information they gather from the operations on the ground, on an hour by hour basis”. Mbalula set a deadline of 31 December to resolve some of the issues at the state entity.

Responding the Mbalula’s statement, Vuka questioned whether the minister’s “war room” plans would yield results. She also questioned why ordinary commuters are not being consulted as well. “We would like to understand what the plans are. But more than anything, a commuter safety plan is needed,” she said.

Vuka said the organisation plans to host more pickets until trains are made safer and the service is improved. 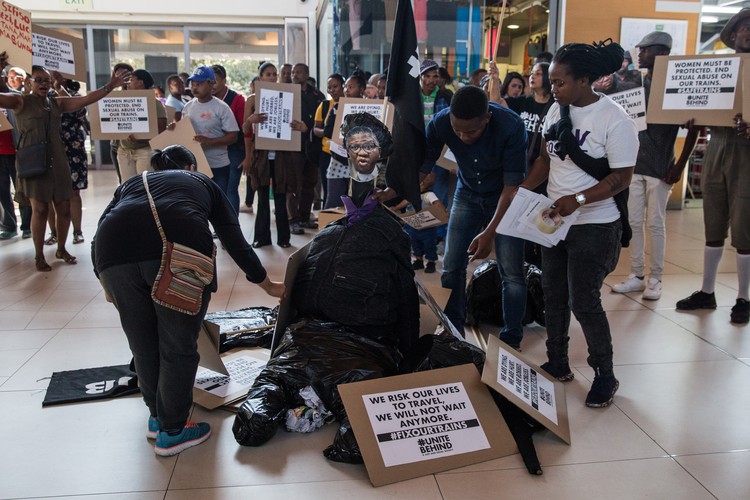 An effigy of Fikile Mbalula and posters were placed in the centre of the train station on Friday. Photo: Ashraf Hendricks

Previous:  City says it has housing opportunities in Blue Downs