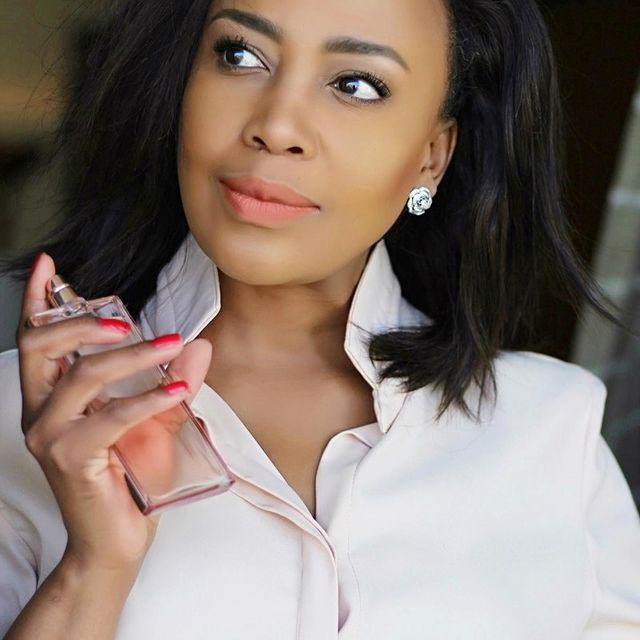 Carol Bouwer is a director of Venalor, which received nearly R7 million from the lottery, apparently to fund glitzy award ceremonies. Photo taken from Bouwer’s Instagram acccount (fair use)

Over the past two years, the National Lotteries Commission has given nearly R7 million in grants to fund glitzy award ceremonies.

The awards celebrate “the contribution of women towards the rebuilding of the fabric of society through the arts”.

Last week GroundUp reported that Venalor had received almost R4.7 million in Lottery funding in the 2018/2019 financial year, and R2 million and R292,300 respectively in August and November 2019. The company also received a R100,000 grant from the National Lotteries Commission Covid-19 relief fund, intended to help non-profit companies “struggling to stay afloat during this time”. Bouwer had refused to say what Venalor did or what the money had been used for.

However after the story was published, she wrote a letter explaining why she had chosen to use Venalor to apply for the Lottery funding “to avoid being excluded from grants on the basis that we are a business”.

As well as the awards, the funds had been used “to run workshops, an exhibition, women’s summits as well as the award ceremonies for which we had applied,” said Bouwer. “We have provided evidence of this and the more than 1,000 beneficiaries of this work can attest to this. The work impacted over 900 women in cooperatives, over a thousand women in small businesses and aspiring entrepreneurs.”

This left only R100,911 of the Lottery’s funding for workshops, summits, exhibitions, or to help women cooperatives or small businesses in 2019 and only R23 in 2020. (The audited financial statements report only a balance of R1,911 in 2019 but this appears to be an error.) 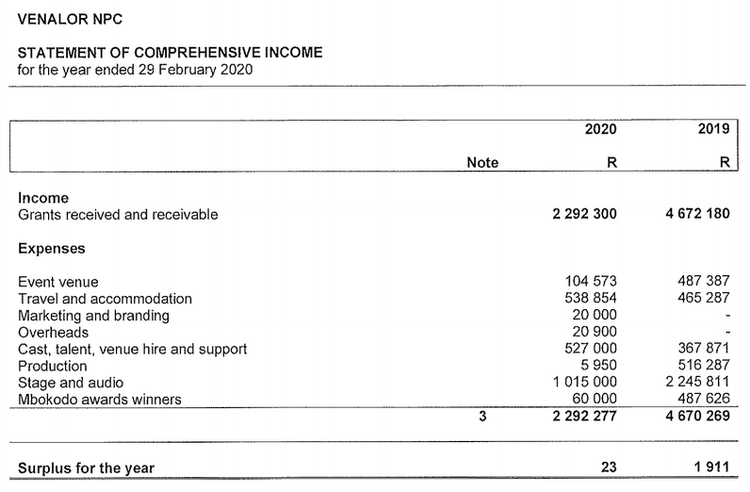 This is a table from Venalor’s audited financial statements. There is no evidence here of any expenditure beyond an awards ceremony. (There appears to be a calculation or printing error in the 2019 expense balance. It should R101,911, not R1,911.)

Bouwer said that she had unsuccessfully applied for Lottery funding for the awards in the past. But that changed after former NLC board chairman Alfred Nevhutanda had attended the 2017 awards as an invited guest, she told GroundUp.

“He was embarrassed when he saw the work we were doing with women and the arts and he got up on the stage and praised us and pledged Lottery support for the awards in the future,” Bouwer said.

Nevhutanda was true to his word and the NLC funded the Mbokodo Awards via Venalor in 2019 and again in 2020.

Bouwer says she was told by the NLC that the commission did not support private businesses and she was advised to set up a non-profit entity in order to apply for a grant.

Venalor, which Bouwer says is the “CSI [corporate social investment] arm of the business”, does not appear to have any dedicated staff of its own, and seemingly has only been used to apply for Lottery funding.

In the 2018 financial year, the Mbokodo awards got R6,194,545 from the KwaZulu-Natal Department of Economic Development, Tourism and Environmental Affairs. The audited statements for that year are in the name of “The Mbokodo Awards 2018 project”, not Venalor.

“Our work is nation-building and fills us with pride. The important community work being done by Mbokodo should not be excluded from accessing funds to which we as a business and as individuals contribute,” Bouwer said.

Asked by GroundUp to comment, Nevhutanda said: “I attended Mbokodo awards like I have been attending invitations from various NPOs and NGOs representing the NLC.” He said his speech had centred around the procedure any organisation must follow in order to apply for funding. “In conclusion, I said NLC will support organisations with good initiatives like I’m seeing with Mbokodo Awards because they empower women. I said everyone should submit applications that comply with the funding requests. My statement had no strings attached.”