R28.3 million handed over to a boxing promoter with no experience in construction

A school in Vuwani in Limpopo that was rebuilt less than two years ago with a R28.3 million Lotto grant is falling apart because of structural problems.

Nineteen months after the school was opened with great fanfare, parts of the buildings are unsafe to use as they have developed cracks and other serious structural problems.

At least a third of the new classrooms and parts of the administration centre have been cordoned off with tape to block access to unsafe areas. Makeshift lintels supported by wooden poles have been erected to support parts of buildings that are in danger of collapsing. 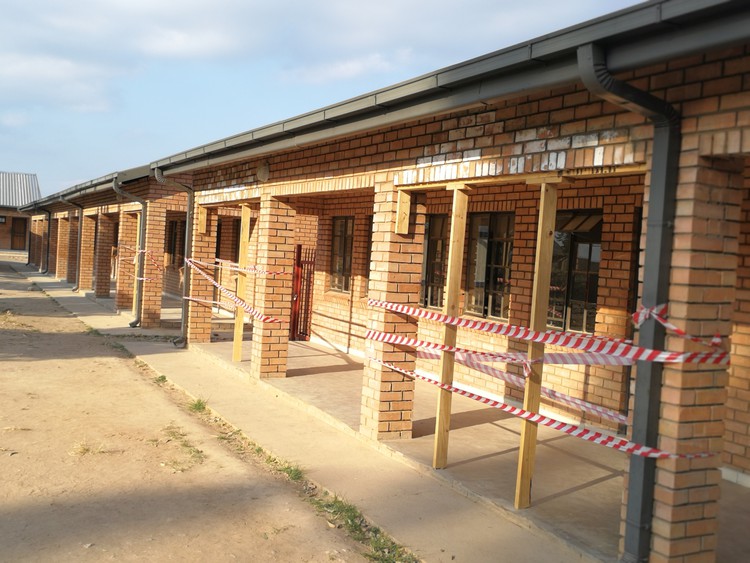 Sections of walls in front of some new classrooms at Vhafamadi High School have had to be propped up because of structural problems caused by poor workmanship. Photo: Raymond Joseph

Cement is falling out between bricks and many of the classrooms have developed cracks in their walls. Students say they feel unsafe and some are experiencing respiratory problems because of dust from the walls and ceilings in some classrooms still in use.

Questions are now being asked as to why a non-profit organisation, run by a Limpopo boxing promoter with no experience or track record in the building or construction industry, was chosen as a recipient to handle the multimillion-rand grant.

It also appears that the National Lotteries Commission failed to do proper due diligence when boxing promoter Azwindini Simba was appointed to oversee the multimillion-rand project and during the building of the school.

The school was destroyed in a fire during violent protest actions the year before. The violence, which began in 2015 and continued into 2016, left about 30 schools totally or partly destroyed, affecting more than 50,000 learners. The protests were against the incorporation of several municipalities into the new Collins Chabane municipality.

The multimillion-rand Lottery grant was used to construct 20 new classrooms, a library, a computer lab, a science laboratory, a kitchen and a school hall at Vhafamadi High, according to the 2017-2018 Annual Performance Plan of the National Lotteries Commission (NLC).

Who received the money?

In a press release after the school’s official opening, the NLC said that it had been approached with a request to help fund the rebuilding of the school. The assistance was approved in terms of the Commission’s “proactive funding” model. This allows the Board to identify needs in communities and allocate funding to address them.

The funds to rebuild the school were channelled through the Simba Community Develop Foundation (SCDF), an NPO run by Simba.

Though he had no experience in the building industry or in handling big projects, the NLC appointed Simba as the “implementing agent” responsible for hiring contractors and overseeing the “flagship” project. This was in spite of the fact that his NPO is non-compliant in its reporting to the Department of Social Development, according to the records held by the NPO Directorate.

Documents made available by the department show that SCDF was issued with “non-compliance notices” in 2015 and again in 2016 after it failed to submit financial statements and to meet other statutory reporting criteria. The foundation was warned in 2015 and again in 2016 that failure to submit the necessary documentation and rectify some issues would result in its deregistration.

But though the foundation did not comply with these warnings, its registration was never cancelled, thanks to a moratorium on removing non-compliant NPOs implemented in 2015 by then Social Development Minister Bathabile Dlamini and still in force. As a result, an unknown number of non-compliant NPOs such as the SCDF, which would have been deregistered were it not for the moratorium, are still included on the department’s register of NPOs. Some of these NPOs have received funding from the National Lotteries Commission. 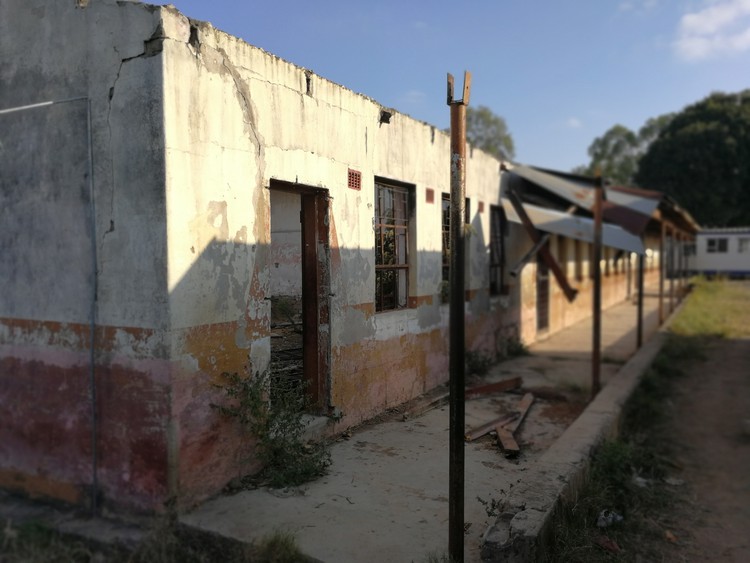 The old Vhafamadi High School that was destroyed by fire during protests that swept through the Vuwani area of Limpopo in 2015 and 2016. Photo: Raymond Joseph

The Commission is, at the best of times, not the most transparent of institutions. It routinely refuses to make specific requested information and documentation available about funded projects and the organisations involved in them. When members of the media have resorted to requesting the information under the Promotion of Access to Information Act (PAIA) legislation, these requests have often been denied by the Lotteries Commission for various reasons, including the need to protect the privacy of people involved in Lottery-funded projects.

During our investigation into the school-building project, information about SCDF was obtained via the records filed at the NPO Directorate.

Simba said a committee had been elected to oversee the project and to appoint contractors to oversee the building of the school. He declined to name the company that built the school. Instead, he referred inquiries to a man he would only identify as “Tshisimba”, who he said was “directly involved” and had attended meetings with the National Lotteries Commission to discuss the problems at the school.

In a brief telephonic interview, “Tshisimba” - who claimed his name was actually “Simba” – said: “Are you sure there is a problem at the school?”

When he was told that reporters had visited the school and had also taken photos of the damage, he changed tack and said: “The Lottery did not fund the parts where there are problems”. He said there had been insufficient funds to build the school and “our company funded parts of it.” Told that the Lotteries Commission had claimed to be the sole funder of the project, “Tshisimba” said: “The Lottery has not given you the right information.”

The National Lotteries Commission said it was “unaware” of any other “funding or funders” involved in the project.

“Tshisimba” said that the company that built the school would only comment at a face-to-face meeting at their offices in Johannesburg. Later he said that “my MD will call you” but refused to name the company or the managing director and would not supply phone numbers for either. Pressed further, he abruptly hung up.

A while later, “Tshisimba” called back to say, “the MD will call you” and hung up again when questioned further. The “MD” never called and SMSs to “Tshisimba” went unanswered. 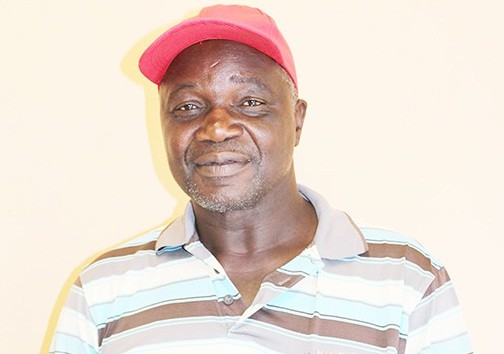 Azwindini Simba, whose NPO was used to apply for a multi-million rand Lottery grant to build the new school. Photo supplied by Limpopo Mirror

Lotteries Commission is aware of the problems

But the National Lotteries Commission denied that Simba was merely used as a conduit to channel money to other organisations. The legal executive manager of the Commission, Tsietsi Maselwa, said that Simba was “the beneficiary” and was responsible for appointing contractors for the construction of the school. “In terms of the Lotteries Commission funding regulations, only non-profit organisations can be funded, and the subsequent contracting of companies becomes the responsibility of the funded NPO, and therefore the money could not have been paid directly to the contractor/company that would have been engaged in the work,” he said.

Tsietsi confirmed that the Lotteries Commission was aware of problems at the school. “The NLC … subsequently appointed an engineering company which has assessed the extent of the challenges and compiled a report for consideration by the NLC. Upon assessment of the report, the NLC has engaged the implementing agent and outlined corrective measures to be implemented. The NLC is currently undertaking monitoring and evaluation processes in line with its funding policies.”

But Simba said that while he was aware that a meeting had been held at the school with representatives of the Commission, he had not attended it and was unaware of the discussions that had taken place. He had also not been contacted by the Commission.

This is not the first time that the Lotteries Commission has been questioned about implementing proper monitoring systems.

Earlier this year, chief financial officer Phillemon Letwaba, in response to queries about another Lottery funded project, explained that the Commission did not get involved in the implementation of funded projects. “However, we provide any support necessary to ensure that the beneficiary is well capacitated to deliver on the project; this is required by the regulations and the Act. It is the responsibility of the NPO to ensure the appointment of adequately competent service providers to ensure the quality of the work meets the standards. [The] NLC has a team of engineers who give reports on the quality of the work done on all our infrastructure-funded projects. The NLC has monitoring and evaluation which monitor the implementation of such projects.” 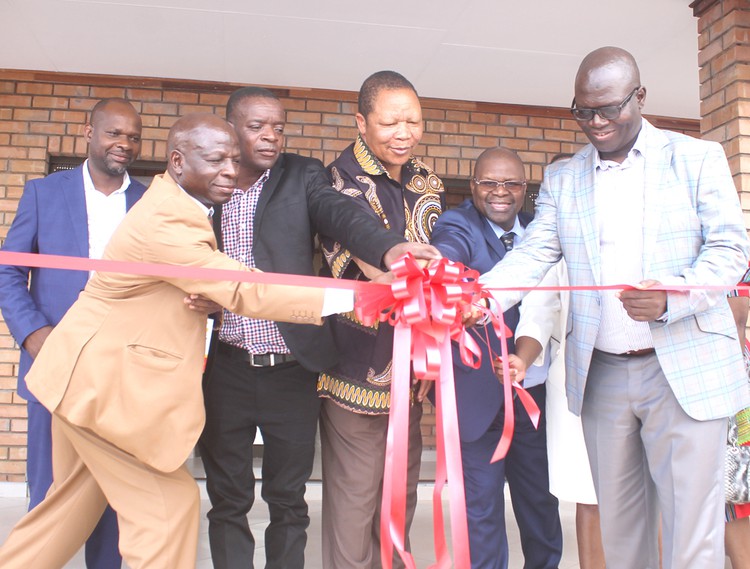 “It can collapse at any time”

Parents and learners are concerned that the school “could collapse at any time”. They blame poor work by contractors and say the damage must be properly repaired. Learners complain that dust from the cracks often falls on them in some classrooms which are still in use.

Parents say they have pleaded with the Department of Education to fix the school, but their appeals have fallen on deaf ears.

Parent Mercy Mugovhani said parents were worried about the safety of their children. “There was no greater joy for the parents than witnessing the construction of the new school building in 2016, but now it’s a nightmare.”

Mugovhani said she was “disappointed” that, even though the school had received more than R28-million from the Lottery, the contractors had done a shoddy job. “We had hoped our school would be rebuilt properly. We’re not saying we want a new school, but we would be happy if they fix the cracks and renovate the buildings,” she said. “We fear for the safety of the learners because the buildings could collapse on top of them. We are also worried because the conditions at school are not conducive to learning. In some classes, there are walls that are cracked and could collapse at any time. This disturbs the learners, especially when it is rainy.”

A teacher at the school, who asked to remain anonymous, said the crumbling infrastructure was a barrier to teaching and learning. “On rainy days we can hardly teach because the learners cannot focus,” he said.

A learner, who also asked to remain anonymous, said cracks had developed in the new toilet block. “We go to the toilets in groups because it’s so dangerous”.

Provincial education spokesperson Sam Makondo said that the department was engaging with different structures to try and resolve the issue.

Local traditional leader Thovhele Vho-Thavha Mashau said he had received a report from community members about the problems at the school. He said that the school or school governing body should report such problems to him, in his capacity as the traditional leader of the community. He said that he would visit the school himself to find out what was happening, adding that learners must be taught in a healthy environment with safe classrooms.

Mashau-Magweni Civic Association’s secretary Polinah Malemela said that the association had not received any reports about problems at the school. She said that if the classes were damaged, the contractor must rebuild the school, “because he is the one who built it and was paid”.

This article was co-published with the Limpopo Mirror.