“We are losing profits. Our clients are impatient and always in a hurry. They can’t wait for about two and a half hours.”

Toni Burton started Zizamele Ceramics in 2008. Located in Masiphumelele, a small township in the south of Cape Town, she employs nine people. She has trained them to do ceramics. She and her employees depend on this small business for their livelihood.

The kilns which make the pottery the business sells, cannot work without electricity. “We may need to resort to going to the studio at night to switch the kilns on after load-shedding ends at 8:30pm and before the 10am one begins,” Burton says. But she also says it’s dangerous to travel in Masiphumelele at night.

The kiln needs to reach a temperature of 1,000ºC over 12 hours. During load shedding it is impossible to get one firing cycle completed before the next outage begins. “Our glaze firing takes even longer as it needs to reach 1,175ºC over 14 hours,” Burton explains.

She is investigating using paraffin to power the kilns. That would mean getting rid of the ones that use electricity.

Meanwhile, Bagcina Dlovo sits frustrated in his panel-beating workshop in Masiphumelele. Earlier in the day he went to a shop outside in a nearby area — but on a different part of the grid — to buy parts for a car he needs to fix. But the electricity was off. So for two hours he had to wait before the shop’s systems came back online. Then, when he got back his shop an hour later, the electricity went off in his area.

“Most of the cars I fix are taxis that have to be on the road to make money. They cannot wait the whole day for me, so they rather take their cars to someone who can do it,” says Dlovo.

The single father of three, who also supports his parents in the Eastern Cape, says that load shedding means that sometimes it takes the whole day to do a one-hour job. “Big businesses have generators and do not lose as much as we do,” explains Dlovo. 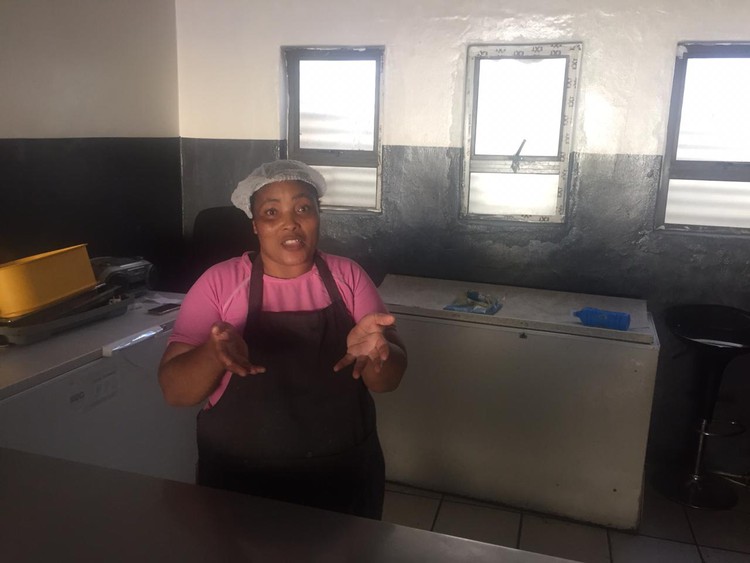 Nolufefe Bisani, who works as a teller at a braai place in Masiphumelele, explains to a customer that she will only be able to sell him meat once the electricity comes back on in two hours. Photo: Thembela Ntongana

Noziziwe Bozo owns a braai place in Masiphumelele. She has seven employees. Her business gets busy at lunch and after work in the evening. When the electricity is off during peak hours it hurts her business.

“I was unable to operate during the busiest time of the day. I need electricity to weigh the meat. And because the braai area is indoors, customers can’t braai if it is dark, so I have to turn them away. I have employees that have children to support. I can’t tell them that I won’t pay them because of electricity. It is not their fault but I am left with a loss at the end of the day,” says Bozo.

She also worries about her meat going off because it must be kept cold. She is considering investing in a generator. “If things keep going like this I will run at a loss.”

Entrepreneurs Tumi Mayende and Thulani Mguda are both in their twenties. They say that even though their business has been doing very well, load shedding is starting to put a damper on things.

The pair started their restaurant, Orgasmic Gawulo in Gugulethu, in October 2017. “We definitely feel the pinch when our food becomes rotten because there’s no electricity,” says Mayende.

They have put a lot of effort into their business. The duo started it in a small caravan outside Gugulethu Mall where they would sell sandwiches. They now run it from a house next to a popular pub and have a much wider menu. They employ four full-time staff.

Mguda says they want to buy a generator, but it won’t be soon because it’s expensive. 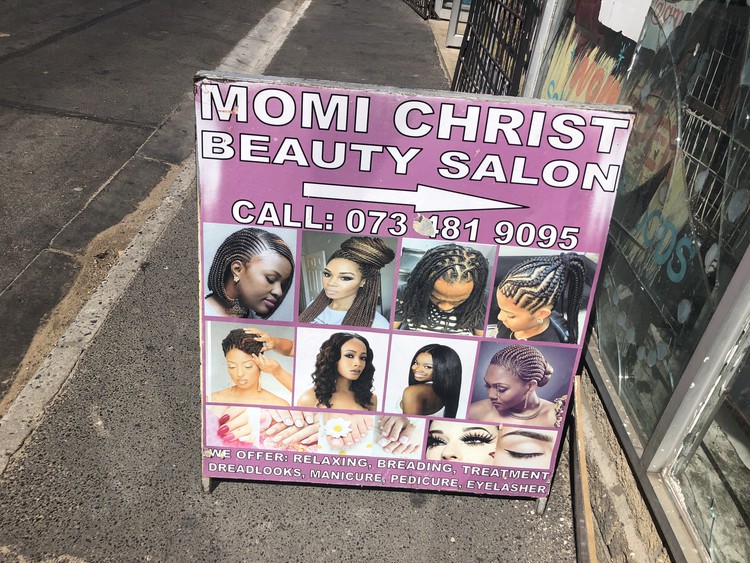 Christine Fri’s hair salon comes to a grinding halt during load shedding. “We are losing profits,” she says.

Christine Fri owns a beauty salon in Parow. “How can you explain to the landlord that there was no electricity and you don’t have money for his rent?” she asks. Like many of the immigrant-owned small businesses in Parow, Fri sends money to her family, in her case her child and parents in Cameroon.

She started her salon, called Momi Christ, in 2008. It is the busiest one in the area, and a cosmopolitan place, serving people from many different countries. Some of her clients travel from as far as Parklands, more than 15km away, for a hairdo. She employs three hairdressers.

“We are losing profits,” Fri says. “Our clients are impatient and always in a hurry. They can’t wait for about two and a half hours.”

Sometimes business is slow, and then the electricity goes off as a customer walks in. “It’s hard to lose a client that way. I couldn’t bear the pain when I lost two clients in such a way yesterday,” Fri says.

Idris is a barber from Congo who also runs his business in Parow (he wouldn’t give his surname). He needs electricity for his razors. “Just imagine that you are busy with someone and before you have finished, the electricity goes off.” Some of his his clients are not from Parow and not aware of the load shedding schedule there. Idris laments that they waste time and fuel to travel for a haircut, only to have the electricity go off.

Tressor is a tailor from Congo who runs his business in Parow (he also wouldn’t give his surname). His sewing machine needs electricity and so it does not work during load shedding. “My clients are angry with me because I am behind with orders. I have lost clients. If the electricity problem is not resolved soon I am worried I will lose more business,” he says.

Next:  CPUT nursing students say residences are not secure