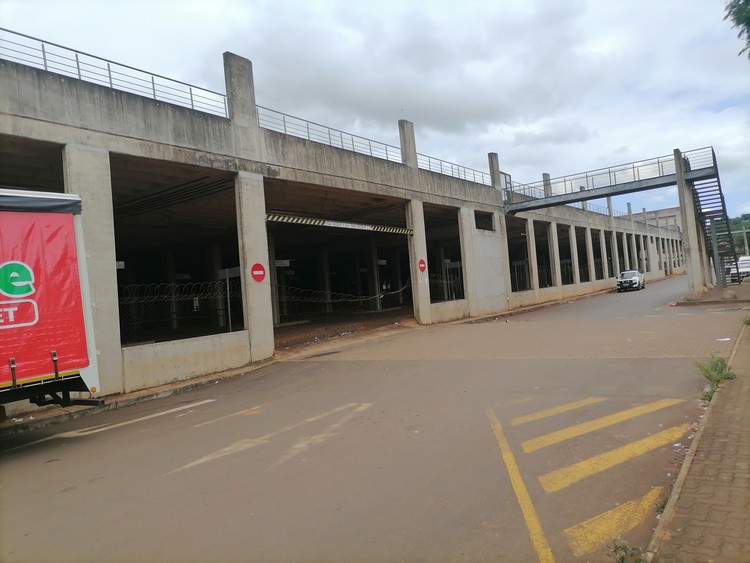 More than R275-million has been spent on this “new” taxi rank in Thohoyandou, Limpopo, but it is still not open. Photo: Bernard Chiguvare

Taxi owners and businesses in Thohoyandou, Limpopo are demanding that the taxi rank, which was started in 2011, be opened.

But the provincial transport department says the rank is still not ready. “Structural defects” have been found and further work is needed, according to Limpopo Department of Roads and Transport spokesperson, Tidimalo Chuene.

The department started building the taxi rank in 2011, said Chuene. It was thought to have been completed in 2013 at an initial cost of over R250-million. Construction included retail space, office blocks, 65 taxi loading bays on the ground and 160 bays on the first floor. But now defects have been found.

Groundup visited the taxi rank recently and found that the fencing is dilapidated, some windows are broken, lights are falling off and grass around the taxi rank is overgrown.

Alfred Mthigalala, Vhembe regional secretary of the South African National Taxi Council (SANTACO), said department officials had stopped updating the council on the progress of the project. “Currently we are not sure why the taxi rank is not operational.”

Mthigalala said there are only three taxi ranks in Thohoyandou, and these have not been maintained and are not in good condition.

“SANTACO is calling the department to open this taxi rank. There are reports that at night there are people sleeping inside the new taxi rank. Very soon the place will be vandalised and will turn into a crime hot spot,” said Mthigalala.

Chuene, told GroundUp that slabs on sections of the first floor started showing cracks, an assessment was done and several problems were identified.

After the assessment, remedial work was completed at a cost of over R25-million. But Chuene said further repair and maintenance work was required.

The contractors had been paid in full because they were not liable for structural deficiencies but the engineering consultant responsible for the design of the structure had not been paid in full, said Chuene.

Chuene acknowledged that the department had not given feedback to SANTACO about the repairs and promised to notify SANTACO when the rank will be opened.

Next:  New full-time Lotteries boss to be appointed early next year