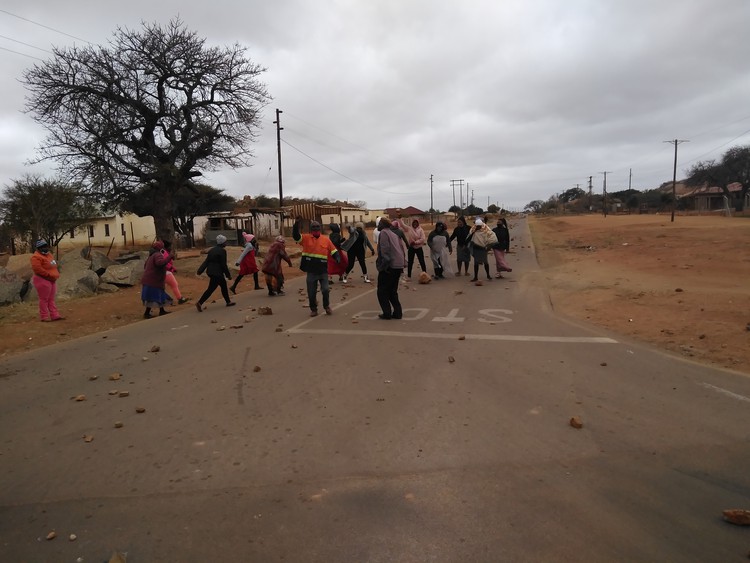 Some residents of Dipateng and Sione villages in Limpopo protest for water on Tuesday. The municipality has promised to provide a tanker on Wednesday. Photo: Bernard Chiguvare

“I am tired of walking around begging for water from people who have boreholes at their homesteads,” said 78-year-old Sontaga Malaka from Dipateng village in Limpopo.

Malaka joined 50 mostly elderly villagers from Dipateng and neighbouring Sione who blocked roads leading to the N1 highway during a two-day protest to demand that the Molemole local municipality give them water.

Malaka said she often walks 2km from home to collect water with her five litre bucket which she fills twice a day.

“I have no money to buy water, that’s why I have to walk. Luckily the community always offers me the water,” said Malaka on Tuesday.

In Dipateng village, the community said that they had not consistently received water since February as the operator at the water tanks nearby closed the water randomly.

In Sione village, water taps were installed in 2018 but no water was pumped to the community. The community claims that since the installation, they have never received any water. They say the municipality does not consistently provide a water tanker to the village. Most families have to buy water from community members who have drilled their own boreholes.

Donald Machaba from Molemole municipality said Sione would receive water with a tank on Wednesday.

Machaba said there was no water problem in Dipateng as the water was running. However at the time of the protests, the taps were dry.

Next:  “We cannot risk our lives by drinking dirty water”