With no toilet, Wallacedene man has to watch over his mother-in-law while she uses a field 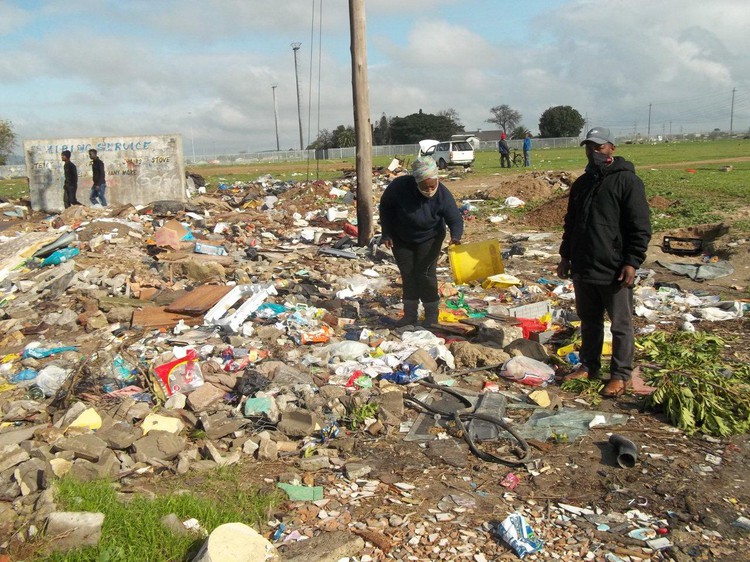 Informal settlement residents Nonstikelelo Mpatheni and Xolani Fatman point out one of the spots where residents dump rubbish and relieve themselves. Photo: Vincent Lali

“While I shit on the vacant land in broad daylight, I feel ashamed because other residents mock me,” says Xolani Fatman, a resident of Phase 7A in Wallacedene, Cape Town.

Fatman and his household are among about 80 families living in the informal settlement who say they have no access to toilets, battle to get water and often contend with piles of uncollected rubbish strewn everywhere.

The open space where most of the residents relieve themselves is covered with faeces, old clothes, discarded furniture, rotting food, plastic bags, and scraps of paper coated with excrement.

Fatman, who lives with his wife, two kids and his 70-year-old mother-in-law, said,“I’m uncomfortable watching over my mother-in-law while she undresses and relieves herself on the open land. She feels unsafe from thugs there.”

Fatman said the City of Cape Town has been sending a water tanker to the settlement at around 10am every day. But, he said, meant access to water was difficult for job seekers like himself who leave early. “I return to find it already gone and spend the whole day without water. After you miss the water tanker, you can’t bathe, cook, quench your thirst or even wash your hands,” he said.

Fatman said they used to rely on the RDP houses nearby for water, but since the outbreak of Covid-19, owners refuse to allow them into their houses.

Community leader Nontsikelelo Mpatheni lives with her husband and three children. Mpatheni said her family mostly use buckets which she empties into storm water drains at night.

She works as a domestic worker in Durbanville twice a week and earns R400. “I can’t collect water from the truck during my workdays, so when I return from work, I have to beg my neighbours for water.”

Mpatheni said most shack dwellers get electricity from nearby houses for about R250 per month because the City has not yet installed electricity. “If I had an electricity box, I would get free electricity and spend some of my money on groceries for my family,” she said.

Eskom Western Cape spokesperson Bullet Ncobo told GroundUp that Eskom was waiting for authorisation from the City to install electricity. “The City has not yet asked us to include the area in our budget and install electricity in the informal settlement,” she said.

Xanthea Limberg, the City’s Mayoral Committee Member for Water and Waste, said chemical toilets had recently been delivered and standpipes would soon be installed.

“During lockdown, the community receives water via water trucks as part of the City’s emergency response to Covid-19 and to help provide access to sanitation in informal settlements,” she said.

With regard to refuse removal, Limberg said residents staying in informal settlements did not get wheelie bins, but “a weekly door-to-door waste collection and bag delivery service” was provided. She said two residents have been employed to do cleaning and rubbish collection in the area.

“The City is about to give the residents a rubbish storage container. In the meantime, the bags are placed on a heap for the truck to collect,” she said.